Gary Witzenburg
As you may recall, VW's compact Golf was voted 2015 North American Car of the Year by a jury of 57 veteran automotive journalists (including this one) and named Car of the Year by Motor Trend and Yahoo Autos and Best Car to Buy 2015 by Green Car Reports.

The car was also a finalist for Green Car Journal's "Green Car of the Year," but ultimately lost to the BMW i3 EV. When I saw GCJ editor Ron Cogan at last November's Los Angeles Auto Show, he asked me to guess which finalist would win. Based on its efficiency and versatility, I guessed the Golf. He smiled but the next day, he named the i3 the winner.

Okay, the technically impressive, carbon-fiber-bodied i3 is a formidable green machine wearing a prestige German label at a semi-affordable ($43,000) price. But it comes in just one (somewhat odd-looking) body style with a choice of all-electric or range-extending electric powertrains, and its EPA-official ranges are 81 miles for the former and just 150 for the latter, costlier version, which totes a tiny (647cc) 34-hp two-cylinder BMW motorbike engine in its tail. 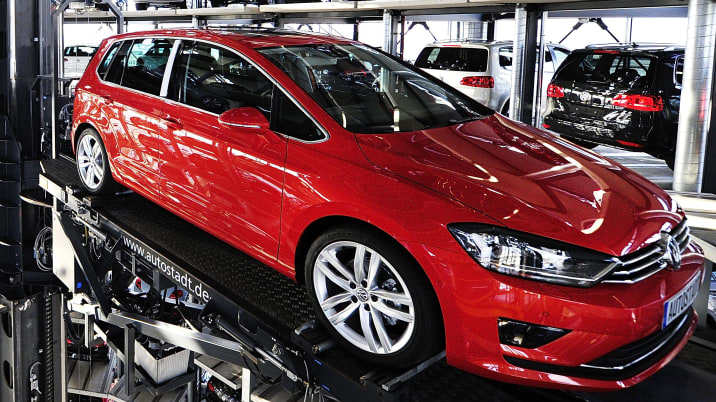 By contrast, the 2015 Golf comes in 3- and 5-door hatchback and even more practical Sportwagen body styles and offers a wide range of eager yet fuel-thrifty turbocharged gas and clean-diesel engines, most with a choice of manual or automatic transmission. An all-electric e-Golf, one of the best EVs we've yet driven, is also available in some areas, and that will be followed, VW says, by a hybrid, a plug-in hybrid and even a CNG-powered model.

No question this all-new seventh-generation 2015 VW Golf is easily the best ever. A bit larger, roomier, aerodynamically slicker and more fuel efficient than the Gen VI Golf it replaces, it's built on an all-new modular platform and boasts an amazing range of models, powertrains and features.

The base 170-horsepower, 1.8-liter turbocharged, direct-injected TSI (turbo straight injection) gasoline four-cylinder, driving through a five-speed manual or a six-speed automatic gearbox, generates a healthy 200 pound-feet of torque (starting at a low 1,600 rpm) for better acceleration, fuel economy and emissions than the outgoing standard five-cylinder. The available 150-hp 2.0L turbocharged TDI (turbo diesel injection) Clean Diesel four, with either a six-speed manual or a six-speed DSG dual-clutch automatic, churns out a strong 236 lb.-ft. of torque at just 1,750 rpm.

The 2015 Golf boasts VW's roomiest, quietest, most comfortable and most nicely-appointed compact-car interior yet. And because it's a hatchback it can accommodate more of your stuff behind its rear seat than even the largest mid-size sedan can manage in its trunk. 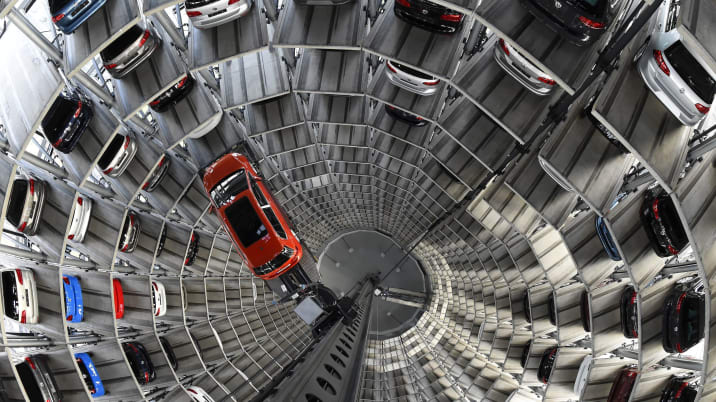 Despite its modest size, the 1.8-liter TSI turbo gas engine gives surprising performance even with automatic transmission, the TDI generates hefty torque through 4,500 rpm, the GTI is agile and quick, and the R is a serious hoot to drive. The new electric power rack-and-pinion steering is quicker than before, and all models offer a fairly quiet and comfortable ride.

Our only complaints are a legroom-challenged rear seat, no 12V outlet in the dash – the nearest one is in the console box, a long cord stretch for a dash-top device – and no USB plug for iPods and other devices. VW says a USB port will be added soon as a running change.

All good, but how fuel efficient are these 2015 Golfs? Focusing on EPA combined ratings – the most realistic fuel economy numbers for most folks most of the time – the TSI hatchbacks deliver 30 miles per gallon with the manual and 29 with the automatic, the TDI does 36 with either transmission, and the heavier Sportwagens are one mpg less. I averaged a fairly impressive 38.7 mpg in mostly freeway driving last summer with a TDI automatic test car.

Even the pretty-quick GTI gets a 28-mpg rating, and the extra-hot R scores a respectable 26 mpg combined. If you can score an e-Golf in your area (and can live with its 83-mile EPA official range), you can boast an EPA combined mpg equivalent economy rating of 116 MPGe. And the e-Golf, though much heavier, shares the Golf family fun-to-drive characteristics of pleasing performance and agile handling.

One downside is that VW as a brand has not scored well in US quality surveys: 24th of 32 in J.D. Power's 2014 Initial Quality Study (IQS) and 22nd of 31 brands in the 2015 J.D. Power Vehicle Dependability Study (VDS). And German parts and service can be expensive. But VW has made a serious effort to improve those rankings in recent years and has improved with each new model.

That said, and despite Green Car Journal's bow to the low-volume, much more expensive BMW i3 EV, my 2015 Green Car of the Year has to be not just any single model but VW's entire incredibly versatile, efficient and multi-talented Golf family of compact cars.