In the two weeks since Australia both Mercedes and Ferrari spoke of the improved performance from their respective cars. In Malaysia, Ferrari showed it. Lewis Hamilton still put his Mercedes-AMG Petronas on pole position, but Sebastian Vettel got within two whiskers of the Brit, lining up second just 0.074 behind. Afterward, Vettel said Ferrari could win the race if everything went well. But in qualifying we didn't know how much of Ferrari's performance was truly down to the car and how much was down to the wet weather that struck near the beginning of Q2.

The rain didn't hamper Nico Rosberg's run – the German said "I just didn't drive good enough" – and he took third spot in the second Mercedes-AMG Petronas. Showing what the Infiniti Red Bull Racing chassis can do when the power unit is working properly, teammates Daniel Ricciardo and Daniil Kvyat grabbed fourth and fifth. Whippersnapper Max Verstappen, in his second race, qualified in sixth with an excellent drive through the rain; just 0.030 behind Kvyat, he said he could have got fifth if he hadn't had a running problem with his brakes.

Williams head of vehicle performance Rob Smedley said he wouldn't complain about Mercedes' advantage, but Felipe Massa has spent the whole season so far banging the alarm about Ferrari's pace. He says Williams has lost its straight-line advantage, part of the reason the first Grove car is back in seventh, while Valtteri Bottas is in eighth. Between them was Romain Grosjean in the Lotus, but he got dropped two positions for a pit-lane infraction in Q2, so he'll be tenth. Ahead of him is Marcus Ericsson in the Sauber, who would lead the charge to turn in another surprise for the Swiss team. 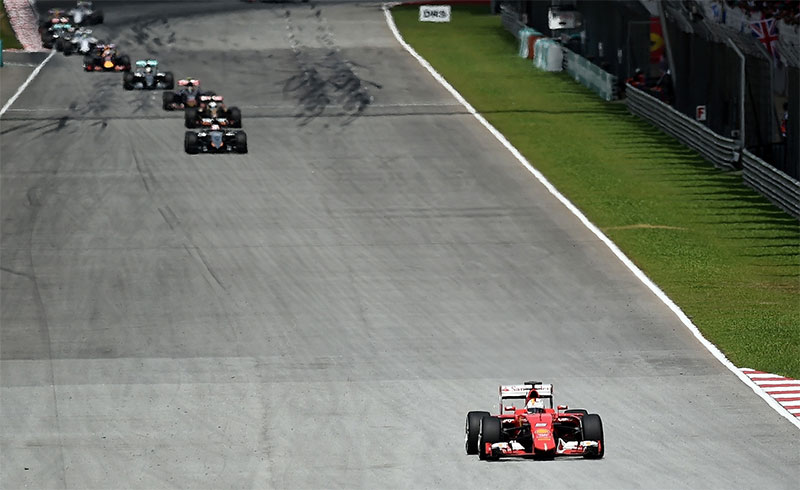 But the real surprise came from the Scuderia Ferrari, who, on a bright, sunny day proved that they don't need to add water for race-winning pace. While Hamilton got made usual awesome start at the lights, Vettel channeled that other famous German Ferrari driver and immediately cut across the track to intimidate Rosberg, maintaining his second place position into the first turn.

Arguably the race-winning move came three laps later at that same turn, when Ericsson plunged in too fast and swapped ends, beaching the rear of his Sauber in the gravel trap. The safety car came out when the recovery truck emerged to retrieve the Sauber, and nearly all of the front-runners took to the pits to swap out of the medium tires. Vettel, however, didn't. When racing resumed on Lap 7, not only did Vettel – on the medium tire – began pulling away from the driver behind him, Nico Hülkenberg in the Force India, and Hülkenberg in turn clogged up the other runners behind. Hamilton was back in sixth trying to make his way through the field, Rosberg another two positions back, while Vettel streaked away. 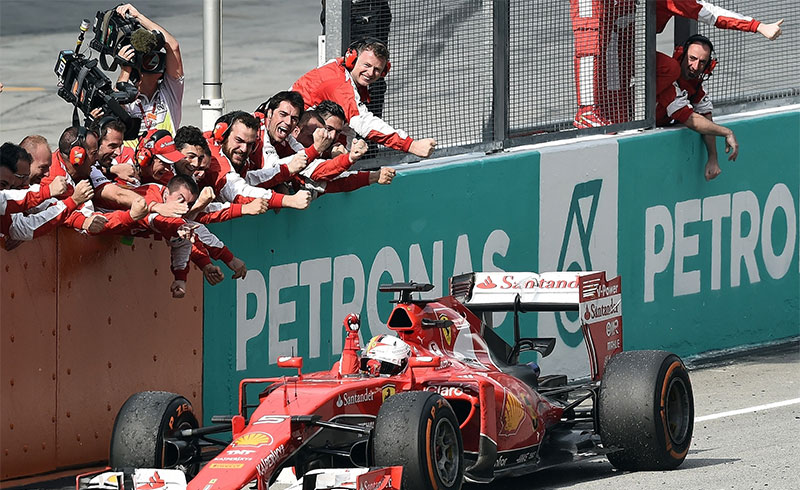 Tire degradation was key, and not only was the Ferrari able to maintain its lead or pull away from the Mercedes' when needed, it managed it Pirelli's on an blisteringly hot Kuala Lumpur day better than the Mercedes. So after Vettel pitted the first time and gave up the lead to Hamilton, the Brit was soon on the radio complaining about the state of his rubber, meanwhile Vettel had carved through the field and passed the Mercedes on track on Lap 24. We haven't seen that happen since 2013. The German convincingly held onto the advantage for the rest of the race, finishing ahead of a sullen Hamilton and a pragmatic-as-ever Rosberg.

The second Ferrari of Kimi Räikkönen backed up the assessment of the team's performance. Having started from 11th, his left rear tire got tagged by Ericsson's front wing at the end of Lap 1 – his second first-lap incident in as many races – and he limped back to the pits with a flat. Coming out in dead last and with a damaged car, he drove a quiet, solid race to fourth place. He was so much stronger than the Williams duo behind that there was no thought of him being caught. 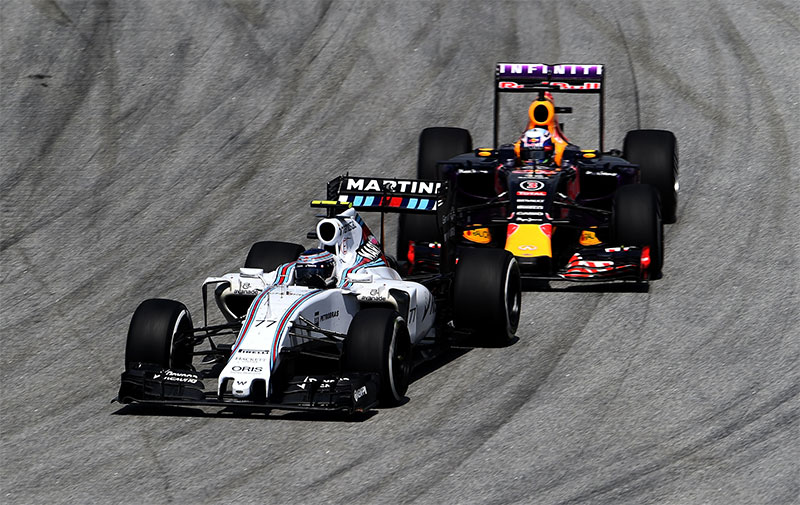 Until the very last lap it looked like Felipe Massa would finish in front of Valtteri Bottas, the two having scrapped for the last four circuits with Bottas unable to get a good move in. Williams let them both race for it, and Bottas pulled off a high-speed pass on the outside of Turn 4, nabbing fifth position in the process and forcing Massa to settle for sixth at the flag. 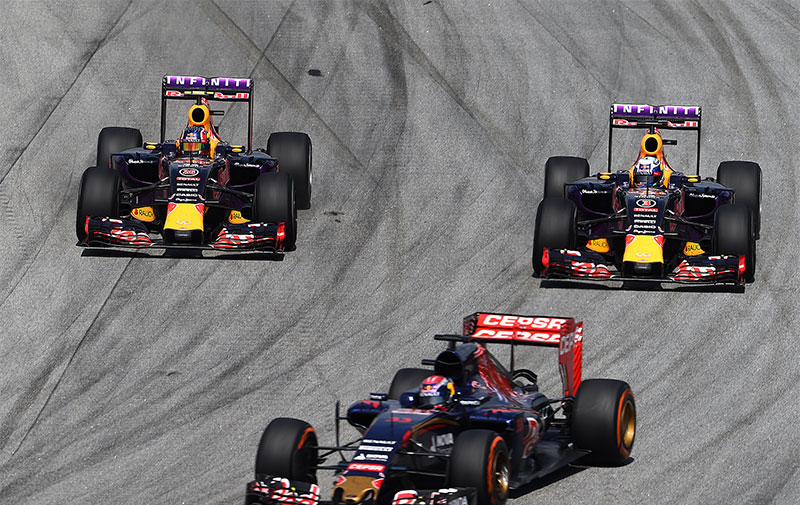 Red Bull "junior" team Toro Rosso proved it's having better luck with its chassis and the Renault power unit than its parent. After taking the fight to Red Bull in Australia the Toro Rosso youngsters put in the one-two punch, Verstappen and Carlos Sainz, Jr. finishing in seventh and eighth, ahead of Red Bull drivers Ricciardo and Kvyat in ninth and tenth. Sainz had started in 15th, ten places behind the second Red Bull, but neither Red Bull driver could hold the Spaniard back. And both Red Bull drivers were lapped by Vettel.

Elsewhere in the pack, both McLarens had to retire from the race but they actually put in a good showing when compared to Australia, fighting at the bottom of the top ten. Button actually got on the radio to express surprise at catching up to and passing other cars. However, they'll be worrying about how many engines they're going to go through this season while Honda gets its groove on. Lotus looks a lot better, too, but they also endured a double retirement. Manor-Marussia got both of its cars running, but just one of them on track for the race. It's a start. As for Force India... well, they need to do something, quickly – both of their cars were just too slow. 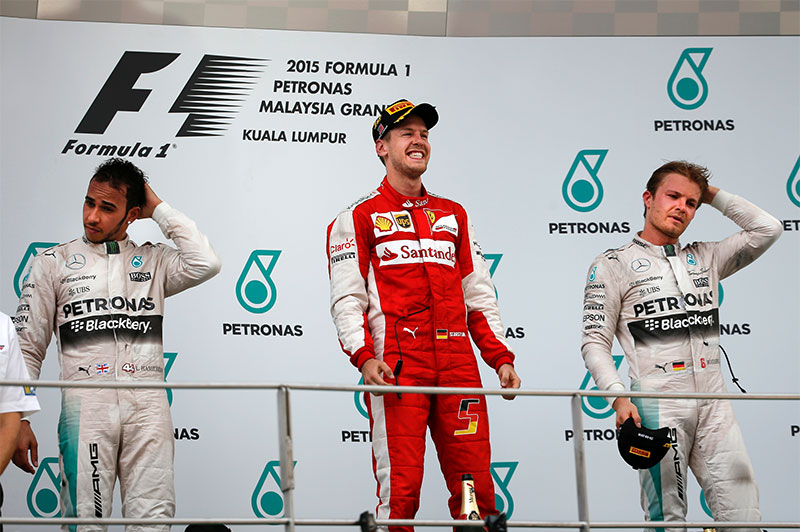 Vettel's win was his fourth in Malaysia – nobody's won more there. It's his first victory since Brazil in 2013, Ferrari's first since Spain of that same year, and to hear him after the race you'd have thought he had won the World Championship. We hope this race wasn't an aberration, because there was a lot of on-track action throughout most of it, all up and down the order.

Even better: everyone who complains about Mercedes' domination and the lack of development options can now shut up – and that includes this writer. It's just one race, but Ferrari eliminated the 34.5-second gap to the leaders from just two weeks ago. It really looks like if the team and engine supplier get the job done properly, anything can happen. After saying his cars would be even faster at this track, Mercedes team boss Toto Wolff said after the race, "Maybe this was the wake-up call we needed." 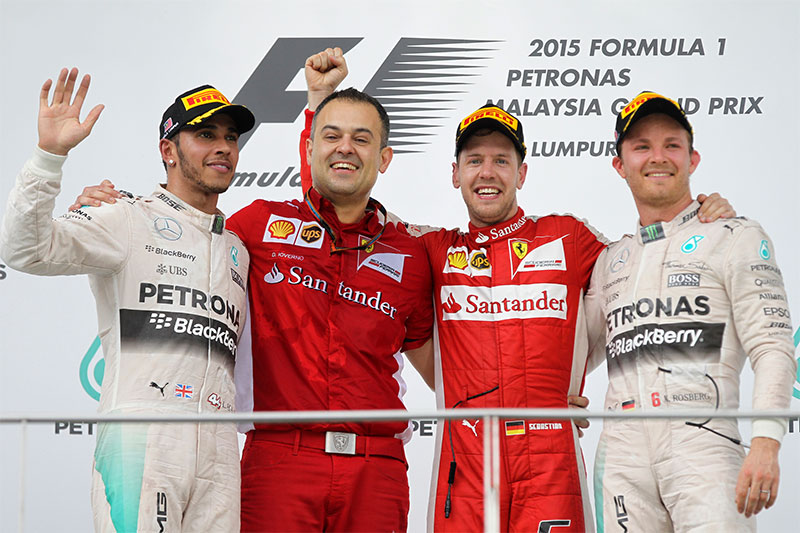 Lewis Hamilton still leads the Driver's Championship with 43 points, Vettel just behind with 40 points, and Rosberg at 33 points. On the Constructor's side, Mercedes has 76 points, Ferrari has 52, Williams has 30. We'll be looking to China in two weeks to know if this was a one-off or a sign of the season to come. See you then.