Is Jaguar testing an electrified XE? 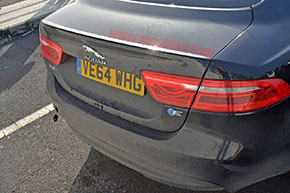 Rumors about Jaguar Land Rover moving further into electrification for its models have been circulating for the last several months. Thanks to some new spy shots, there's even more evidence that the company could have a hybrid or electric model on the way.

According to our spies, this rather innocuous looking XE was spied with a group of camouflaged XF and F-Pace prototypes in Spain. Everything about the luxury sedan looks fairly stock until you see the rear end. There, just under the taillight, is a circular blue badge with an "E" in it. That emblem and the vehicle being with other test cars hints at the possibility of Jaguar doing something electrified with the vehicle. Unfortunately, there are no other clues here to determine exactly what is happening underneath the skin.

Jaguar Land Rover has been insinuating its intention to build greener models for a while. The company even founded an engineering center partially for them in 2013. A fully electric powertrain is reportedly under development to slot into the F-Pace and maybe also for a Land Rover. Meanwhile, Jag has a trademark on the name EV-Type. With these new photos, the signs of JLR's coming electrification continue to mount.