A Distinct Offering In A Growing Segment Of Homebrew Performance Cars

It was a bit of kismet that the same month we drove the Caterham 620 R, we drove the Lucra LC470. On the first pass there are plenty of similarities: both were dreamed up by one man with a particular vision of lightweight driving enjoyment, both are reminders of mid-twentieth-century design, both have spartan interiors, both will make loud noises and throw down when the accelerator gets a wallop.

Yet there is more than one substantial difference. The 1,200-pound Caterham tops out with a supercharged four-cylinder with 310 horsepower that howls like an angry kelpie under the whip, where the 2,000-pound Lucra is just getting started with a 520-hp, LS7 V8, and roars like Zeus through large rectangular sidepipes.

Lucra creator Luke Richards is from Southern California but grew up in England, which is how you get the mash-up of a curvaceous and feathery European body propelled by high-horsepower iron – or in this case, aluminum. That body is made entirely of three-layer carbon fiber. The monocoque weighs 130 pounds and is riveted to a laser-cut, tube-framed chassis, then laid up with more CF underneath to fully enclose the tubes. In the best tradition of English roadsters with minimal protection from the elements – a greater test of character in Ye Olde than Orange County – the Lucra doesn't come with windows but you can order a set of Lexan inserts. 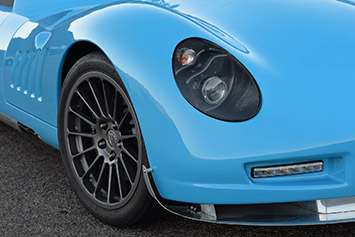 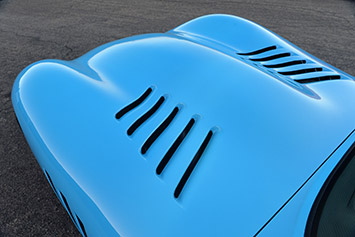 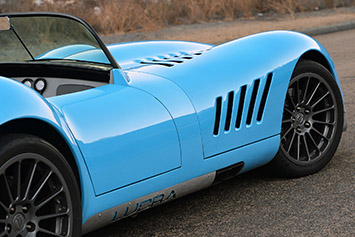 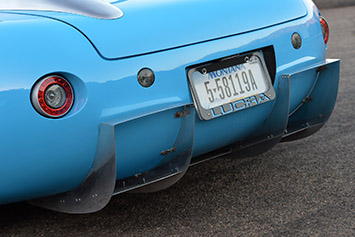 Its shape was inspired by the Lister Jaguars of the late 1950s; have a look at the Lister Knobbly Jaguar and you're most of the way to the Lucra LC470, down to the yellow and green paint job worn by the first show-car Lucras (or the one that appeared in Fast & Furious 6). It was a fitting design well to draw from, as Brian Lister was also a lone tinkerer devoted to producing his own sports cars.

We like the look of it. Even with that probing snout, it's the best kind of drivable evolution of something from Hanna Barbera's Wacky Races, all curves in two axes and shrink-wrapped length in the other. Eighteen-inch wheels have never looked so big. From outside the car, our favorite aspect is from the rear, where that wide round tail hangs only just above the ground on tires as wide as Alaska.

Underneath the exotica many of the Lucra's bits are prosaic General Motors components, like the C4 Corvette suspension links and the C6 electronic door latches, the fuel pump and regulator from a Chevrolet Silverado 1500 pickup. But who needs bespoke trunk latches? You'll find plenty of above-and-beyond treats where it matters, like 12-sided military-spec bolts throughout and wiring harnesses made in-house with lightweight, aviation-grade wires and connectors. The LS7 breathes through custom 1.875-inch Magnaflow headers and a ceramic-coated exhaust. 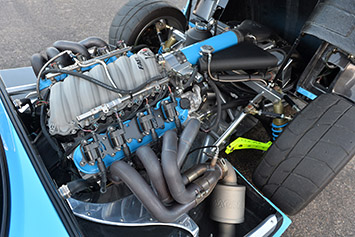 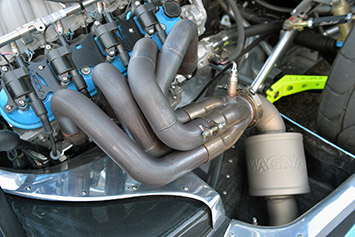 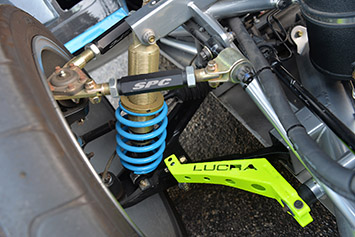 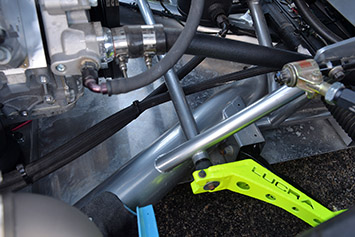 The best view is from inside the cabin, where your vision is overcome by the three swells ahead of you cresting the front wheels and the engine. In the blue car we drove, we couldn't help thinking we were Neptune driving the waves. Loud, loud waves.

No Lister had an interior as roomy and luxurious as the Lucra. Stitched leather is everywhere, covering the carbon fiber dash and center tunnel. The aluminum racing seats are quite comfortable, can be had with diamond-pattern stitching or left bare metal, and with five-point harnesses to keep a body secure. The pedal box is adjustable, as is the stopper behind the clutch pedal, and the steering column tilts and telescopes. There's no airbag on the detachable tiller, but the column collapses in an accident according to NASCAR standards.

Six custom gauges are laid out across the instrument panel, joined by eight toggle switches, but as we've found in almost every classic car we've driven, we barely had need to look at them. With your butt practically riding the grooves in the road, a wide open cockpit, and a growling exhaust note at your feet, you have all the ambient cues you need to figure out how the engine is working and how fast you're going. 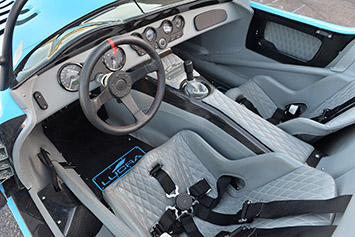 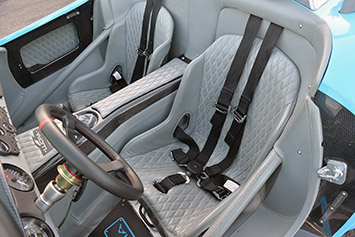 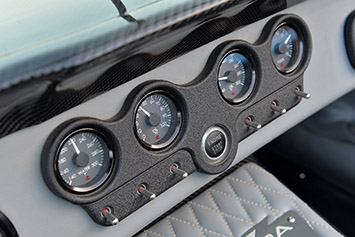 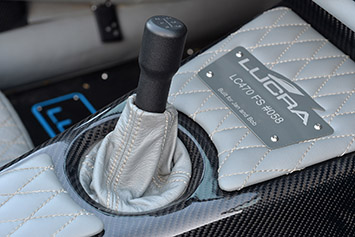 On our drive that was often described as "plenty fast." The Lucra had 210 more horsepower than the Caterham 620 R to haul about 800 more pounds. We've already explained, though, that the Caterham is lunatic; this makes the Lucra 470R merely deeply mad. If you needed more, Lucra will be happy to install a 7.0-liter LS7 V8 with 630 hp and up.

Once you get a sense of the roadster's length and where its invisible nose is, and learn the clutch engagement point, the Lucra is easy to haul around town. The rack-and-pinion steering needs elbow grease at low speed, due in part to the 275-section rubber up front and ginormous 315-section rubber in the rear, but it won't ever wear you out. The only sticky point we encountered was the Tremec TKO 600RR five-speed manual – the short-throw shifter felt good, but the action was a little notchier than we would have preferred.

The fully adjustable suspension comes tuned by racing outfit Pro-Shocks with aluminum shocks and 180-lightweight barrel springs with five inches of travel, but they can only do so much to tame an all-carbon body wrapped around four-inch-diameter steel tubes and completely sealed underneath with steel plates. The ride is stiff, but as with the steering, it wouldn't stop you from enjoying the car all day so long as you didn't confine yourself to nasty roads. 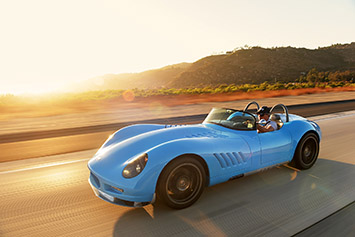 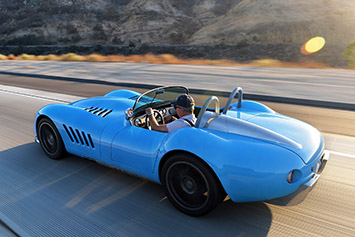 Get on a roll, however, and there's nothing but fun to be had. Four hundred and thirty horsepower is more than enough to throw your head back even on the go; downshift before getting on it and the lack of headrests will have you risking whiplash. Richards said it would do 0-60 in 2.7 seconds when fitted with the 3.07:1 axle. The drive-by-wire throttle is linear, the rack-and-pinion steering is as direct as an angry German, the closely spaced gears keep the engine in the action, and the baritone blasts ejected from both sides of the beast in front of you provokes a courage more clear-headed and profound than anything you could get from alcohol. The Wilwood brakes are easy to employ, and as abrupt as the acceleration when jumped on.

Richards told us that there's so much grip that the tires won't let go, which might be true; we had as much fun as we could driving strange, curvy roads through San Marcos, CA, plainly aware that there was a lot more in the car. But you know what will unhook the rear end? A poor choice of downshift. We caught our error in time, as it felt like the rear end was lifting up and shouting, "I double-dog dare you to finish that shift! Hope you like the number '180!'"

Richards had also said, "A complete novice can handle one with 600 hp and not be in any danger." This is true in the same way that a Division III college basketball player could inbound the ball and dribble it up the court in garbage time of a blowout NBA game. If it came time to play, however, you'd find that kid hanging by his jock strap from the rafters. 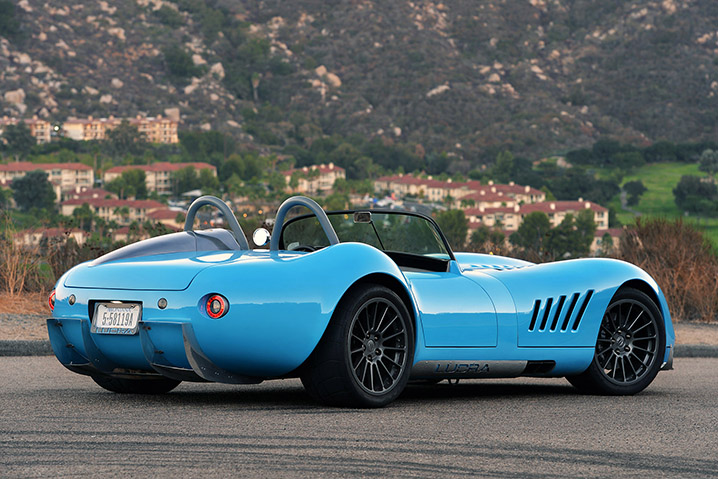 When we were finished, one of the strongest sensations we had about the drive – beyond our quivering ears – was that of being totally involved.

In today's best sports cars you can get engrossed in a mathematical game of hooking up corners. The Lucra experience went far beyond that, to the reason that expertly tuned classic cars (and classic-inspired cars) are so awesome: they demand your attention at all times, with everything on the car speaking to you and you needing to speak back. There's no safety net; you go out there and focus and make it happen, or you don't come back. On that day and sight unseen we could have driven the outstanding Porsche 911 GT3 appreciably faster than the Lucra LC470, but the Porsche wouldn't have been nearly as fun in the doing of it.

At $95,000 to get in the door and $135,000 in the guise we drove, this is another toy for a certain few. But the Lucra does exactly what these kinds of toys are supposed to do, and what many don't: it successfully blends the old and the new, its build quality is better than many production cars, it's entirely adjustable and customizable and it's a distinct offering in a growing segment of homebrew performance cars. The Lucra will even check a few of those "practicality" boxes as well, with a trunk larger than you'd ever expect and a 20-gallon gas tank. Were Dick Dastardly and Muttley still in the racing business, we think they'd look no further.

Note: a previous version of this piece said that our test car had a 6.3-liter LS3 V8 with 420 horsepower. The text has been changed to reflect that it actually has a 7.0-liter LS7 with 520 horsepower.