Next Chrysler minivan spied inside and out

This One Could Be A PHEV

Chrysler isn't supposed to unveil the next-generation Town & Country until the 2016 Detroit Auto Show, but FCA is hard at work getting the minivan ready for launch. Our spies recently caught prototypes on the road and took copious photos of the interior and exterior, giving us an early idea what to expect from the future family-hauler.

These shots make it pretty clear that FCA's engineers aren't done working on the next T&C yet, and all of the camouflage on the outside makes any styling changes very difficult to spot. However, the company is testing the future version with a current one, and the new design appears to have harder angles.

One intriguing picture clearly shows the Dodge logo on the back of the minivan. The Dodge Grand Caravan is supposed to be killed off for 2016, though. We've also heard the next-generation minivan will get a plug-in hybrid variant, which was reportedly confirmed last week.

The interior is slightly less concealed than the outside, but development is still ongoing in there, too. It's easy to spot the familiar infotainment screen from other FCA products, and there's just a peek at the T&C's instrument cluster, including the design for the tachometer. A rotary dial gearshift also appears to be in the center console, similar to the Chrysler 200.

Even at this early stage, it appears that FCA is trying to take the next T&C a little more upmarket compared to the current iteration. The move fits well with earlier rumors of the price increasing for the future model. 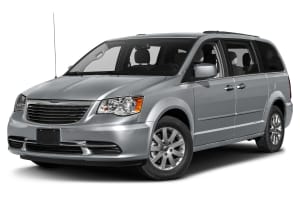