Electrified Golf Is The EV We Could Live With View All Specs
Until now, the only way you could get the words "electric" and " Golf" so close together was the put the word "cart" after them. Knowing that the e-Golf would be the next step in Volkswagen's tilt at electrification, the automaker designed the MkVII platform to fit a myriad of drivetrains, none of which would require purchasers to sacrifice the Golf-ness that makes the best-selling car in Europe, not to mention a huge hit here in the States. In the e-Golf that means power electronics underhood and an amoeba-shaped battery that fits in the floorpan, between the axles, where it won't ooze into the interior space.

We look at the e-Golf as another kind of crossover: traditional cars that just happen to be electric, offering a taste of the new EV religion in soothing, recognizable garb. We had one for a week in its natural habitat, Los Angeles and the surrounding area. We really like the fact that, powertrain aside, it maintains everything we dig about the Golf. The caveat is that this is an EV first and a Golf second – you must first address the EV challenges and live within EV constraints, then you can enjoy the Golf bits. Even so, it's the electric car this writer would buy once we acquired the lifestyle to make proper use of it. 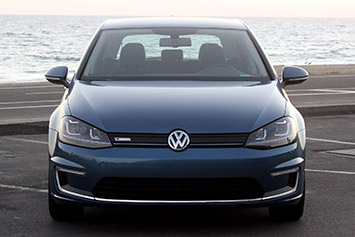 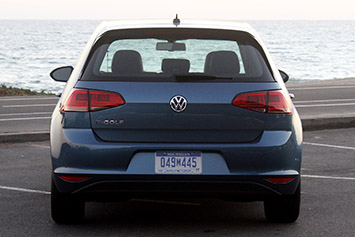 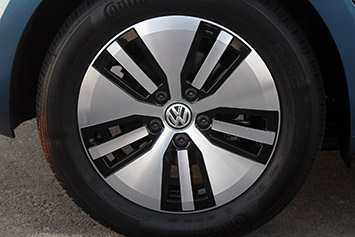 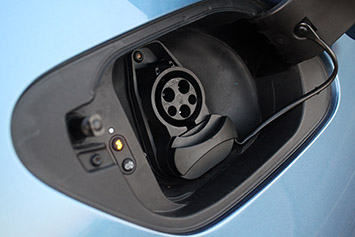 The most noticeable exterior change to the e-Golf are 16-inch Astana wheels wrapped in 205-series tires that reduce rolling resistance by ten percent. Once you've cottoned on to that, the other alterations become apparent: the blue trim strip underlining the radiator grille, the redesigned bumper with the C-shaped decoration LED lights and the full-LED headlamps above them, the little blue "e" in the model name on the rear hatch. You won't notice the underbody paneling, that the frontal area of the e-Golf is ten percent smaller than that of a traditional Golf, that the radiator is closed off, or the reshaped rear spoiler and vanes on the C-pillars. Volkswagen says this results in a ten-percent drop in drag, getting the coefficient down to 0.281, but the standard Golf is also listed at 0.28. The TSI and TDI are 0.29. No matter those numbers, the point is the e-Golf looks just like... a Golf. 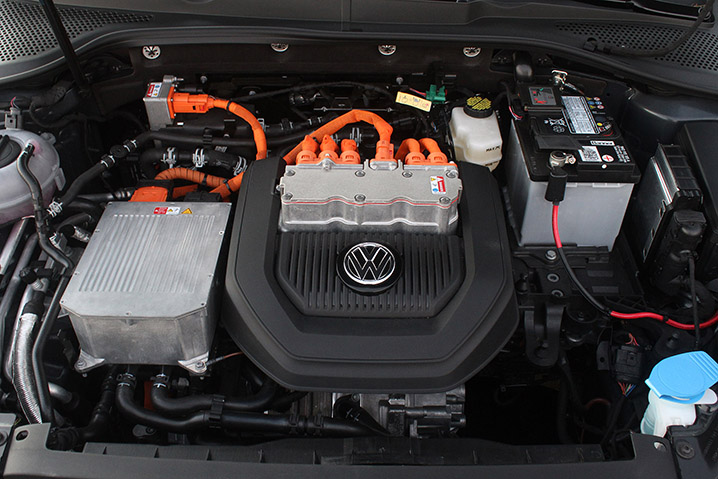 The interior gets a few more tweaks, all still subtle. The upholstery treatment is leatherette seats and surfaces with gray and black trim, and the list of standard equipment is lengthy. Buyers get parking heater/ventilation, six-inch touchscreen radio and nav, a heated windscreen, leather steering wheel, and a leather gear knob as part of the standard e-Golf package. In the dash cluster there's a power display on the left instead of a tachometer, and a gauge in the speedometer displays the amount of charge in the battery. Between the two dials is a color display presenting data like range, regenerative braking level and charge time. Subscribe to the Car-Net service and you'll get features like remote battery charging and climate control operation.

The EV maintains its interior Golf-ness because the 24.2-kWh lithium-ion battery is shaped to fit between the axles in the floor of the Modular Transverse Matrix (MQB) platform. These 264 cells are grouped into 27 modules and laid out in a structure that looks like a bizarro Jell-O mold, but it's what makes the e-Golf a Golf that just happens to be electric. Of the car's 3,391-pound curb weight, 700 pounds of that is the battery, located way down at the bottom. Center of gravity is the obvious beneficiary, along with cabin spaciousness. 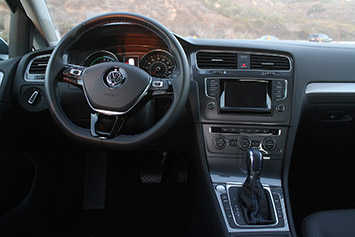 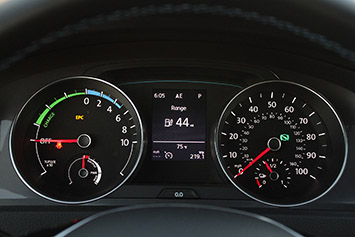 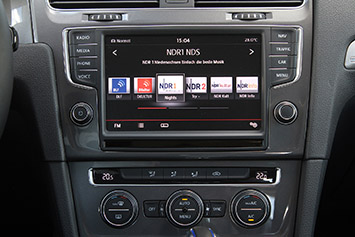 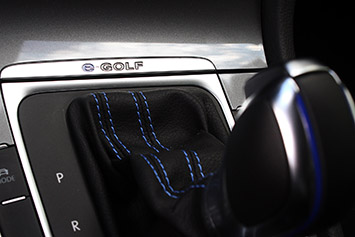 With a suspension tweaked to handle the extra weight, the electric hatchback also maintains its driving Golf-ness. It's stable, it's peppy, and it's not afraid of cornering – keeping in mind it rides on a narrow footprint. The electric and mechanical braking systems worked together imperceptibly. Outside of hard acceleration and engine noise, you'd struggle to find it missing anything from the traditional Golf experience.

Additional driver involvement comes from working through the driving and brake regen modes, should you wish. There are three driving profiles: Normal – which the car always starts in – Eco, and Eco+. Eco modes put a dent in power usage, though. The motor output drops to 94 hp, pull-away torque is reduced to 162 lb-ft, throttle response is scaled back, A/C output is reduced, and the top speed drops to 71 mph. Eco+ bangs that down further: motor output becomes 74 hp, pull-away torque is 129 lb-ft, the A/C is turned off, and the top speed is 56 mph.

There are four levels of regenerative braking after the default, D, which has no regen. Tapping the gear lever to the left or right hops you through the D levels – D1, D2, D3, and B – while pulling back (where "Sport" would be on a traditional Golf) puts you into B, the strongest level. It's a game that gets fun to play, timing your braking as you coast to a stoplight, figuring out which level will get you stationary when and where you need to be without touching the brake pedal. 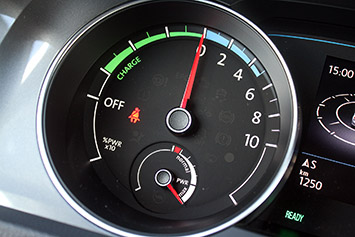 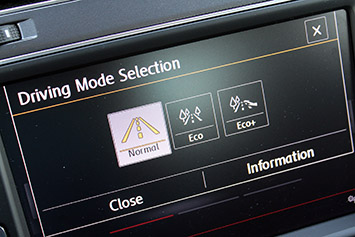 We really like the Volkswagen e-Golf. This author has never had an electric car for an extended-loan daily driver before, and we quickly discovered that it's not something you just jump into – it needs planning. It also needs a certain kind of lifestyle, which we don't have. We can't access or park near the only outlet in our apartment garage. Even if we could, the one time we tried to charge with a 115-volt outlet, with about four miles of range left, the car informed us it would take almost 17 hours to fill up. Nor do we have a day job, so we miss out on a regular set of hours in one location to plug in. Our lifestyle is as compatible with an electric car as beer and toothpaste, so for a few days we pretended to have office hours at the Santa Monica Public Library, just to get some juice.

On the days we stayed in LA proper, everything was good – you're always going to find a charge station nearby and plenty of options for passing time during a quick boost. The average day is an electric breeze in this car, although you do have to prep for getting over canyon passes here - doing the 8.5 miles over the San Fernando Mountains needs a lot more than 8.5 miles of range, because 4.5 miles of it is uphill.

But the day we had to make a 110-mile round trip drive to Irvine, well, that was more of an adventure than we planned. We started with 72 miles of range, but steady-state cruising at 65 miles per hour does no favors for electric cars, and we watched the range drop until we had 20 miles left and 20 miles to go to get to our destination. Having planned ahead, we lunched at a mall while the car drank up. We stayed off the highway after that, but the Orange County surface streets we needed were like downscaled highways, with 40-mph speed limits and long stretches between lights, so range still suffered. 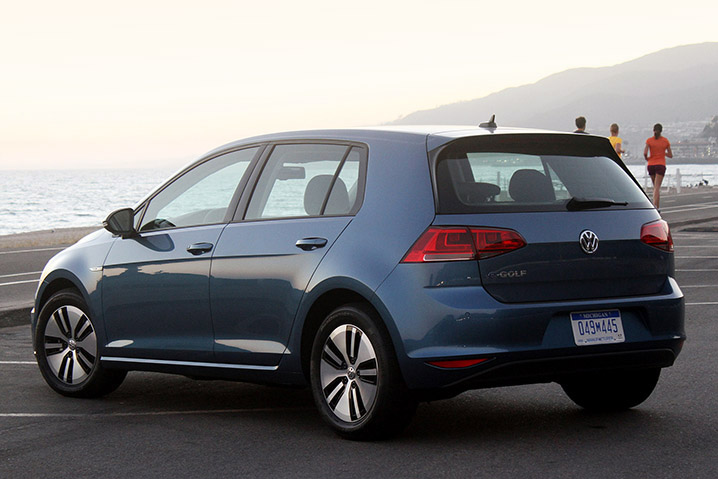 We plugged into a wall outlet for five hours while in Irvine and started home with 39 miles of range, knowing we'd have to stop somewhere. The e-Golf navigation maps every nearby charging station, even the ones you can't use. That's how you end up cruising a residential neighborhood on reduced power, with one mile of range left, heading for a charge point that a security guard will tell you is on private university grounds, so you put on your nice face and convince him to let you plug in for 30 minutes so you can reach the ChargePoint station four miles hence. ChargePoints aren't as thick on the ground in the area as we had thought, and obviously, we hadn't done enough planning – nor charging – ahead of time. The blame is entirely ours, not the car's.

When asked to do what it's meant to do, and given the juice to do it, the e-Golf is excellent – and why wouldn't it be? It's a Golf. If we wanted a second car for a city runabout – after our, yes, go-anywhere-there's-gas ICE car – and were determined to go electric, this would be the one. The e-Golf is priced at $35,445, excluding $820 for destination, so the Nissan Leaf is $6,400 less dear (after tax credits for both). That's not a little bit of money, agreed, but the Leaf isn't as handsome, roomy, fun, or nice as the e-Golf. The Chevy Spark EV is only $500 less expensive but an even bigger compromise. The Ford Focus Electric is fine to look at but more expensive for no good reason. The Chevy Spark EV is about $8,000 less expensive, but nothing like the Golf except that it's electric. The BMW i3 and Mercedes-Benz B-Class Electric are in different price brackets.

The Ford Focus Electric is fine to look at and $6,000 less expensive, a compelling amount in cars that aren't that far apart. We like the look, feel, and ride of the VW better, but it would be hard to tell someone else to simply ignore the difference. As far as this writer's concerned, the e-Golf is it. Once we got a home charger. Or a day job. 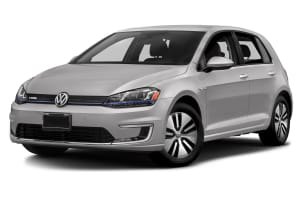