Drop The Top And Raise The Bar View All Specs
BMW history is littered with small, four-seater convertibles that offer style, spirited performance and driving flexibility. These days it's the 2 Series range, not the 1 or the 3, that carries on the droptop-driver's-car tradition, and the 2015 228i Convertible will the first flavor of it to hit US shores.

With prices starting in the upper $30k range, conservative but attractive exterior styling and just enough interior comforts and amenities to feel like a true-luxury player, the 228i makes a strong initial case for itself as either a first or second vehicle.

Concurrent with my First Drive of the 2015 BMW X6 M, the Germans brought along their new 2 for testing along some pretty mellow Texas driving routes outside of Austin. With roads that ranged from sweeping country lanes to small town streets, and weather changing handily from cold and misty to bright and warm, I got a good sample of what the new open-top 2 can do.


I think BMW has constructed a better product for the small-luxury convertible intender with the 228i than it had with the 1 Series convertible. For all that I loved that car, the new machine's refined demeanor, increased power and bumped up fuel economy should make it more attractive to most. It may not be a better driver's car than the older ankle-biter, but there's no question that it's a more mature product.

And considering the company's plans to expand the scope of the 2 Convertible range, it should sell better, too. BMW will offer the aforementioned M235i Convertible – with its 320-hp, 330-lb-ft inline-six engine – for sale, along with xDrive versions of both the 35i and the 28i. I'd be shocked if one of those flavors of 2 wasn't popping up in posh driveways across the nation, following the spring launch and winter's yearly retreat. 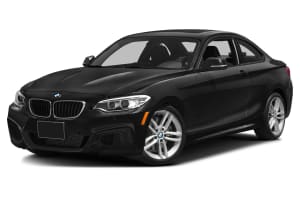