Kia is learning the same hard lesson that Volkswagen learned so many years ago – it's not easy for a volume brand to sell a luxury car. The K900 luxury sedan has suffered through slow sales, moving just over 1,300 vehicles last year, and now the South Korean company is trimming the cost of entry to entice consumers.

A new K900 Premium lowers the sedan's price by $5,000, from $59,500 to $54,500, not including a $900 destination charge, Motor Authority reports. While the price is lower, previously standard items, such as LED headlights, Nappa leather and a 17-speaker Lexicon stereo have been packaged as part of a new Luxury trim, which will maintain the original starting price.

The two-tier scheme will force consumers to make a new decision about their K900, but that won't extend to the brute under the hood. A 5.0-liter V8 remains a standard item, making even the K900 Premium a tempting option for anyone that values straight-line thrust in a comfortable package.

What are your thoughts? Is Kia merely rearranging the deck chairs on a sedan-shaped Titanic, or do you think trimming the price will do some good for the slow-selling K900? The new price is already reflected on Kia's consumer website, so head over, mess about and then come back and have your say about the move in Comments. 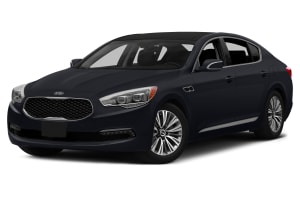