Were gun show attendees in the crosshairs of license-plate readers?

An email obtained by the American Civil Liberties Union shows the DEA collaborated with the Bureau of Alcohol, Tobacco and Firearms on a plan to collect data on vehicles at a Phoenix-area gun show in 2009. It remains unclear whether the plan was ever implemented.

The revelation comes one day after other documents obtained by the ACLU shed light on a previously undisclosed Department of Justice program that has operated a nationwide license-plate reader database for the past seven years. The database now contains hundreds of millions of records on the whereabouts of American motorists.

Although the latest email, obtained via a Freedom Of Information Act request, was largely redacted, the government released a portion that reads, "DEA Phoenix Division Office is working closely with ATF on attacking the guns going to (redacted) and the gun shows, to include programs/operation with LPRs at the gun shows."

Privacy advocates already expressed fears about a sprawling program being operated with limited oversight and few safeguards in place to protect the records of law-abiding citizens. With time-stamped records created at specific locations, anyone with access could compile a detailed profile of a motorist's daily habits and patterns, learning things like where they attend religious services or which doctors they see.

The gun show email demonstrates how license-plate reader data might be used another way: to draw connections between congregating citizens. Such monitoring has the potential to have a chilling effect on the rights of law-abiding citizens to peacefully assemble, the ACLU said.

"An automatic license-plate reader cannot distinguish between people transporting illegal guns and those transporting legal guns, or no guns at all; it only documents the presence of any car driving to the event," the ACLU said in a statement. "Mere attendance at a gun show, it appeared, would have been enough to have one's presence noted in a DEA database." 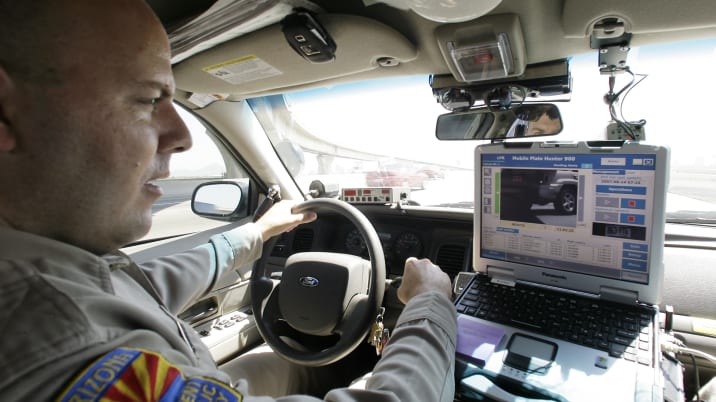 The Department of Justice, which houses the DEA, could not be reached for comment Tuesday night. In an email to the ACLU, federal officials said the prospective program to monitor gun show attendees was never implemented, although it was unclear why the plan was scuttled.

License-plate readers have been controversial for some time. While they have been helpful in solving crimes in some cases, the Electronic Frontier Foundation research has found that 99.8 percent of the data collected relates to the whereabouts of everyday motorists and not to crime.

Whether it's in the newly divulged federal program, known as the National License Plate Recognition Initiative, or the dozens of regional or local license-plate reader programs in existence, there are questions on how data is collected, how long it's stored and how it's shared with other organizations.

Last February, the Department of Homeland Security proposed the creation of a nationwide database to house license-plate reader records, one that, at least on the surface, seems to mirror the database the DEA secretly already had in place. One day after the proposal, the department quickly retracted its plan due to an immediate outcry over privacy concerns. Related Video: