Race Recap: Rolex 24 at Daytona was fast and feisty Let the record show that victory at the 2015 Rolex 24 at Daytona went to the No. 02 Chip Ganassi Racing with Felix Sabates Target/ Ford EcoBoost Riley DP driven by Verizon IndyCar drivers Scott Dixon and Tony Kanaan and NASCAR drivers Jamie McMurray and Kyle Larson. The winner did 740 laps to cover 2,634.3 miles in 24 hours and 57.667 seconds. That's a statement to this year's pace in spite of 18 cautions, two more than last year: the Michael Shank Racing Ligier got pole with a time of 1:39.194, slower than last year's pole time of 1:38.270; however, the winning car last year only did 695 laps.

The fight for top honors was shaved to a four-car battle over the first third of the event. The No. 02 Ganassi car took the lead on the first lap, swapping it well into the night with the No. 01 Ganassi car, the No. 10 Wayne Taylor Racing Corvette DP, and the defending champion No. 5 Action Express Corvette DP, all of them staying within about 20 seconds of one another. The Action Express car had a fuel connector come loose and lost three laps getting towed back to the pits to have it reattached, but was back in the lead 18 hours in. The No. 01 Ganassi car dropped out with recurring clutch problems 22 hours in, retiring not long after.

A race-within-the-race is where the concluding action happened, a seven minute, 30-second dash from the end of the last caution to the checkered flag. During the penultimate pit stops with an hour to go, Dixon was in second place followed Jordan Taylor in the Wayne Taylor Racing DP into the pits but beat him out, taking the lead. The Action Express car was in third. In the last pit stops of the race, Dixon gained even more time, getting a four-second advantage over Taylor.

Then a full-course caution came out twenty minutes before the finish when a Prototype Challenge car hit the wall and caught fire, bunching up the field. That closed the pits, but the Wayne Taylor Racing car had to pit during that yellow because of a miscalculation of driver time. No driver can be behind the wheel for more than four hours in a six-hour period but Jordan Taylor was going to go over, so he came in to swap out for brother Ricky. That cost the team any chance of second place, since they took an additional drive-through penalty for entering closed pits.

When the track went green again, Sebastien Bourdais in the Action Express car stayed all over Dixon for the final five laps but couldn't get around him. The Frenchman crossed the line 1.333 seconds behind the No. 02 Ganassi, with Wayne Taylor Racing a minute back in third.

The next Prototype car came in six laps behind, the final car running in that class at the end in fifth was 35 laps down, and the field suffered a huge number of retirements – only 5 of the 16 entries finished the race. The DeltaWing wasn't one of them, out of the race in less than two hours with a gearbox malfunction.

The win is the second for Dixon, the first for teammates Kanaan, Larson and McMurray. McMurray now keeps company with AJ Foyt and Mario Andretti as the only three drivers to have won this race and the Daytona 500. It's the Ganassi team's sixth victory in twelve attempts – no team has won as many times in the event's 53 years. A Verizon IndyCar Series driver has been on the overall winning team for the past five years.

And it's not all bad news for Wayne Taylor Racing: the team was invited to race Le Mans this year, and owner Wayne Taylor says he is lining up a car for the event. We can't wait to see what they do. 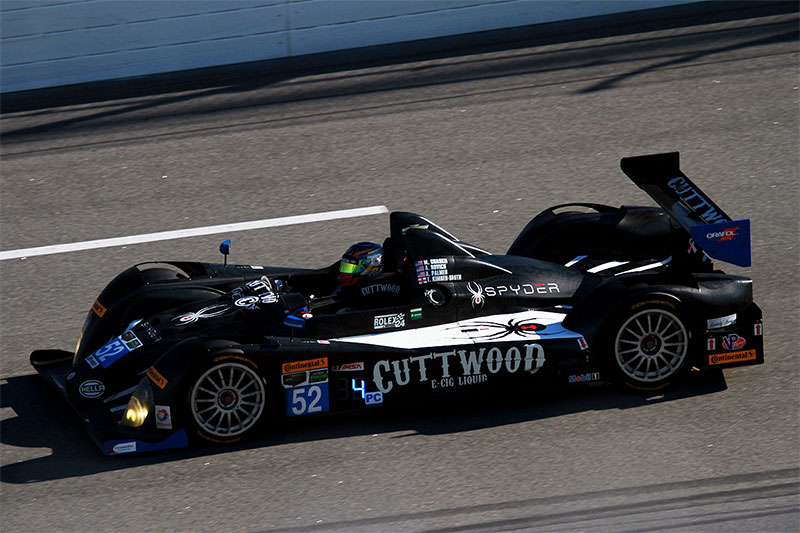 The only real event in Prototype Challenge was the one that brought out the caution just before the end of the race. The No. 54 CORE Autosport Oreca FLM09 had ruled the class for most of the race and looked like a lock to defend its victory from last year. Then driver Colin Braun took suspension damage after being forced off the circuit by a slower DP car. He slowed down to trundle back to the pits, but didn't go slow enough, and the suspension collapsed when he got back up to speed in the infield, sending him into the wall. The car caught on fire, and that was the end of the Core Autosport race and its No. 54 chassis.

The No. 52 PR1/Mathiasen Motorsports car inherited the lead and kept it to the end, driven by driven by Tom Kimber-Smith with teammates Andrew Palmer, Andrew Novich, and Mike Guasch. It was followed by the No. 16 car driven by Johnny Mowlem, Tom Papadopoulos, Tomy Drissi, Brian Alder, and Martin Plowman. 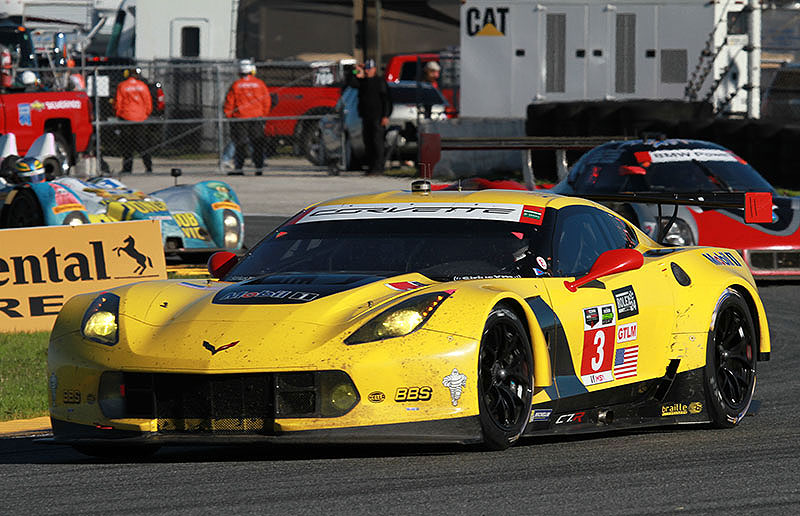 The Corvette C7.R came on way strong this year, racing hard for the entire race to the first Corvette class victory since 2001 in the No. 3 car driven by Jan Magnussen, Ryan Briscoe and Antonio Garcia. It was Magnussen's first victory after having tried 11 times.

Attrition through crashes and mechanicals wore down the field, but six hours into it there were still four different manufacturers on the lead lap, with Ryan Briscoe in the No. 3 Corvette C7.R ahead of Oliver Gavin in the sister No. 4 ca ahead of a works Porsche.

At half-time the Corvettes had swapped positions and both works Porsches had taken themselves out – one of them got feisty getting around an Aston Martin in the GTD class, the second Porsche drove onto the grass trying to avoid the two in front, spun, and collided with the sister Porsche when he caromed back onto the track.

That left the two Rahal-Letterman BMW Z4 GTEs to challenge the Corvettes. In the late morning the No. 4 Corvette hit the slow-moving No. 66 RG Racing prototype and had to hit the pits for bodywork repairs, then the lead No. 25 BMW suffered a lengthy pit stop when a wheel nut wouldn't go on properly. After the last caution collapsed the field the No. 3 C7.R raced the No. 24 Z4 GTE to the end, Garcia crossing the line only 0.478 in front of Dirk Werner. Third place went to the No. 4 Corvette, fourth to the No. 25 BMW. 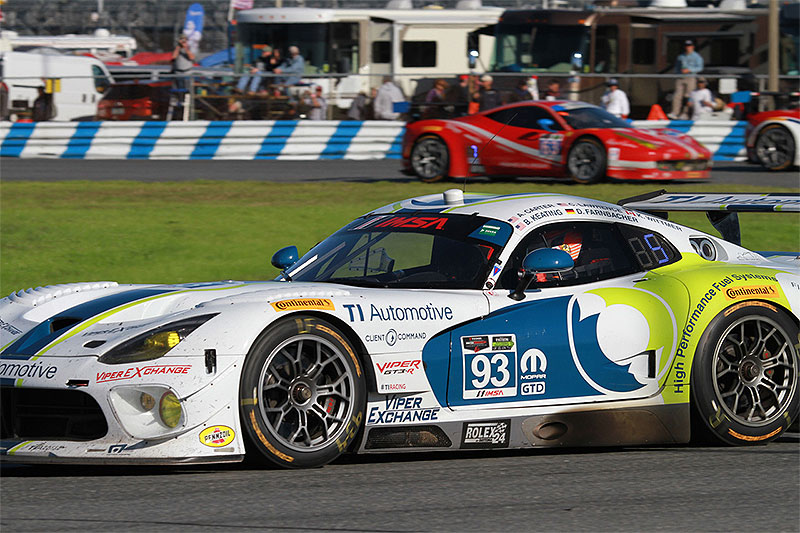 After the No. 93 TI Automotive Riley Motorsports Dodge Viper SRT driven by Dominik Farnbacher, Al Carter, Kuno Wittmer, Cameron Lawrence and Ben Keating won the GTD class, team owner Keating – the largest Viper dealer in the country – said "This one's for Viper nation!" He could have also said, "And it's a 'Told-you-so!' to Dodge!" The factory effort won the GTLM championship last year, yet after Dodge ended factory sponsorship the TI outift decided to run Daytona, and they showed even a privateer Viper can get the job done.

They stayed in the hunt for the whole race with the No. 63 Scuderia Corse Ferrari and No. 22 Alex Job Racing/WeatherTech Porsche until the No. 33 Viper lost the lead to engine troubles. The No. 93 Viper got out front and stayed there with authority, crossing the line seven seconds ahead of the No. 22 Porsche driven by Shane van Gisbergen, Leh Keen, Andrew Davis, and Cooper MacNeil. 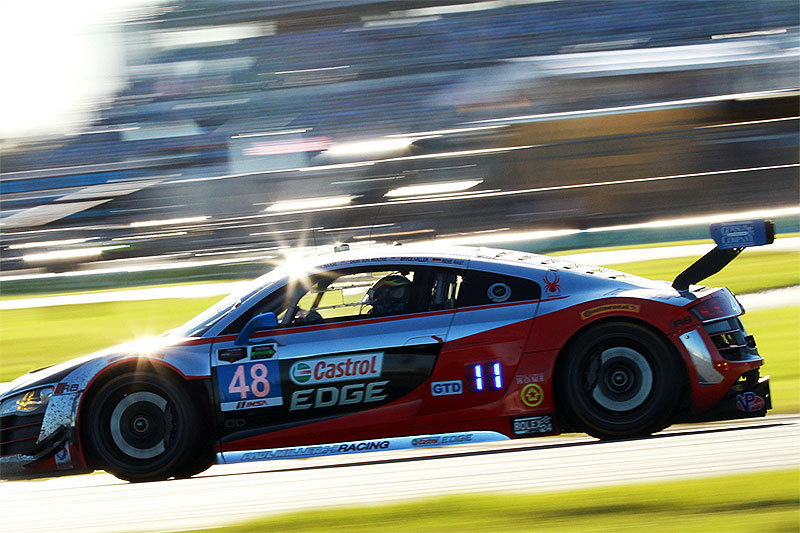 As for the Audi teams, Satoshi Hoshino in the No. 45 Flying Lizard car needed a gearbox change after burning up the clutch after a spin, which dropped them down the order. They would finish tenth in class. The No. 48 car of Paul Miller Racing didn't have the straight-line pace, a deficiency compounded by little errors like taking a penalty for passing the pace car during a caution. Still, they'd recover what they could to finish fifth.

That's Daytona, done and dusted. There's a gallery of the Prototype winners and victory lane above, and 169 images from all the race action below.