Records Of GM's Charitable Giving Are Being Sought

Pete Bigelow
General Motors may be donating large sums of money to charities that subsequently bestow honors upon CEO Mary Barra in an effort to rehabilitate her image, a prominent nonprofit said Wednesday.

The awards amount to an "unseemly" way to buy positive publicity for Barra in the wake of a company-wide safety scandal responsible for killing at least 45 motorists, the president of the National Legal Policy Center wrote in a letter to GM's chairman.

"The company has vigorously publicized these awards, apparently as part of a campaign to promote and rehabilitate Ms. Barra's image in the wake of the ignition switch recall delay, for which the death toll continues to rise," NLPC president Peter Flaherty wrote.

GM did not respond for a request to comment.

It's not the first time the the National Legal and Policy Center, which promotes ethics in public life, has criticized Barra for accepting awards amid the ongoing ignition-switch saga. Two months ago, the organization pressed the National Women's History Museum to rescind a "Living Legacy Award" designated for Barra. Family members of deceased motorists made similar requests, and the museum ultimately did not present Barra with the award at its banquet, though it left open the possibility of giving her the award at another time. 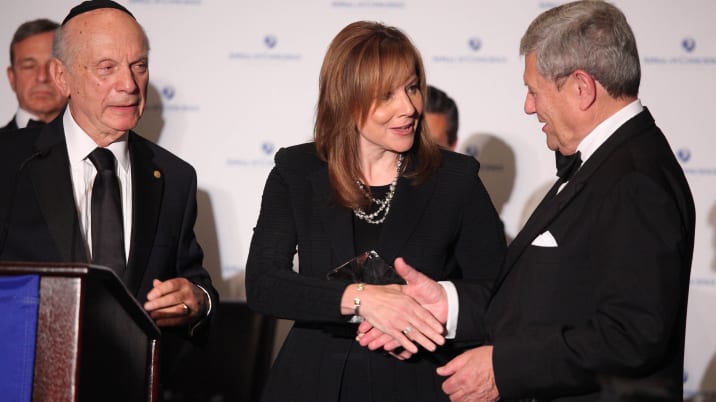 In Wake Of Recalls, Awards

Flaherty's letter comes one day after The Daily Kanban detailed three instances in which Barra had received an award from charities that appeared funded by General Motors, including an "Appeal of Conscience" award from an organization that encouraged "a standard in which corporate America and global corporations accept responsibility."

She received that award only months after documents and Congressional hearings revealed how General Motors delayed action for more than a decade on an ignition-switch flaw in millions of vehicles. At latest count, the administrator appointed by the company to handle claims said 45 people have been killed in accidents caused by the defect.

General Motors was an underwriter of the gala at which the award was presented, according to the news outlet. One year prior, event sponsors paid $100,000 to underwrite the event. The Daily Kanban cited two more instances where GM had made donations to charities that proceeded to honor Barra.

If the contributions are linked to the awards, GM and the respective charities may have run afoul of Internal Revenue Service regulations, the NLPC said. "If the campaign is designed not only to enhance GM's image with the public, but also to strengthen Ms. Barra's position within the company, it is inappropriate because it is being conducted with corporate assets," Flaherty wrote.

He hopes that GM will voluntarily disclose its charitable giving. If the company does not, the NLPC says it will file a shareholder resolution at GM's annual meeting in June that seeks release of the records. In the past, the NLPC has used a similar tactic in asking other companies, such as Verizon and Pepsi Co., to disclose their giving.
X