Toyota has issued a recall of roughly 5,000 Prius V hybrids. All of the affected vehicles are from model years 2014 and 2015.

The problem with the hybrid MPVs centers on its Occupant Classification System. According to the company, the OCS is responsible for activating and deactivating the passenger's side airbag, and in the affected models, the system may not have been calibrated correctly. Should a crash occur, the passenger front airbag may not deploy.

The company reports there have been no injuries or fatalities related to the OCS faulty calibration. Owner will be notified and will, naturally, be asked to report in for a free recalibration.
Show full PR text
TOYOTA RECALLS CERTAIN 2014-2015 MODEL YEAR PRIUS V VEHICLES

In the involved vehicles, the front passenger seat is equipped with an Occupant Classification System (OCS), which activates / deactivates the passenger seat air bag system depending on the weight of the seat occupant. There is a possibility that some OCS's may not have been calibrated properly during the vehicle manufacturing process. Under some conditions, this could result in no deployment of an airbag, increasing the risk of an injury to a front seat passenger in the event of crash.

Toyota is not aware of any injuries or fatalities caused by this condition.

Owners of the involved vehicles will receive a notification by first class mail. Toyota dealers will recalibrate the Occupant Classification System properly. 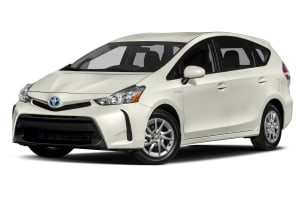