Nary a day after the end of the 2015 Detroit Auto Show media days, a bombshell has been dropped in the form of the order guides for the new Shelby GT350 and GT350R. A draft of the complete guide for both track weapons popped up in the forums of Mustang6G, offering the car's biggest fans the most detailed look yet at how the new models can be outfitted. Arguably the most notable news is that Ford lists both cars not as 2016 models, but as 2015s. 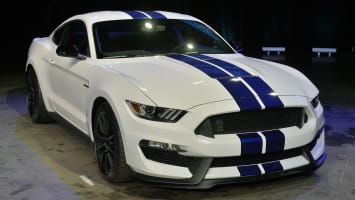 Wearing the codes 900A and 920A for the GT350 and GT350R, respectively, Ford lists eight available colors, including standard Mustang shades, like Oxford White, Race Red and Competition Orange, as well as a pair of exclusive hues, in Avalanche Gray and Shadow Black. Notably, neither vehicle can be optioned in the gorgeous Liquid Blue of the GT350R show car.

Stripe packages are aplenty on the hottest Mustangs, with black, white and blue stripes available on both models. The R cars, though, will be distinguishable by red accents on its optional stripe groups. The standard model will feature an ebony interior, while the high-performance 'Stang will have an ebony cabin with red accents.

Aesthetics aside, this order guide gives us the deepest look yet at the available equipment on both models. Not surprisingly, the options list is quite small, with the standard GT350 offering just two packages, racing stripes and a black roof (which we bet will be mutually exclusive with the stripe jobs). The standard car's Technology Pack adds MagneRide, "heavy-duty" front springs, navigation with Sync 3, leather-wrapped, climate-controlled power seats, satellite radio, dual-zone climate control and selectable driving modes. The Track Pack, meanwhile, adds the same driver-selectable modes, MagneRide and the stiffened front springs as the Tech Pack, along with coolers for the engine oil, trans and diff and a strut-tower brace. These two packs are mutually exclusive.

Of course, if you're in the market for the GT350R, your only option is the Electronics Pack, which basically adds features deleted by your high-performance trim, such as a stereo and climate control. On top of that, you'll get Sync 3 with navigation and satellite radio.

Head over to the Mustang6G forums for a look at the entire order guide.