Basem Wasef
The road to supercar stardom is littered with missteps. For every slam-dunk like the McLaren F1 and Ferrari F40, there are contenders that never quite reach their full potential – think Mercedes-Benz SLR McLaren and Jaguar XJ220. Fear of building a mediocre halo car is why automakers take costly detours like reverse-engineering a carbon fiber chassis when aluminum just won't do (we're looking at you, Lexus LFA), and it's often those second, third, and even fourth major redirects that can make the difference between has-been and hero.

History has been kind to the late, great Acura NSX. Though its final years saw it lagging in power, ballooning in price and burdened by unsightly bubble headlamps, the NSX went to pasture in 2005 with a reputation for being an innovative, driver-focused ride that also happened to be practical enough for daily use. Despite its lofty aspirations and attainable price point, fifteen years of production saw just under 9,000 NSXs on the road, which begs the inevitable question: was Acura's mid-engine top dog too tame to be great, yet too ubiquitous to be exotic? Considering how the NSX redux has been worked (and re-worked as a stillborn front-engine V10 GT, only to return to a mid-engine layout), it's safe to say Acura is intent on securing supercar greatness.

While the essential spirit of the original NSX program targeted the "New Sports Experimental" idea, Large Project Leader Ted Klaus says that Shigeru Uehara, the man responsible for the original NSX (and Honda S2000, among others) advised the US-based development team that they ought to be "... open-minded to doing things for the emotional benefit of the customer," and not come from a place that was "hyper rational." In other words, build a car that makes the heart skip a beat. As such, the next-generation NSX has departed from the 2013 concept and assumed a more emotional, expressive design language that hides a more engineering-intensive drivetrain. Gone is the naturally aspirated, transverse-mounted V6, replaced with a longitudinally mounted, turbocharged, dry-sump V6 that produces "north of 550 horsepower," according to Acura brass. As before, the internal combustion mill works with three electric motors to deliver power to all four wheels. Super Handling All-Wheel Drive, indeed – or, as Acura refers to it in this application, Sport Hybrid Super Handling All-Wheel Drive.

Why the shift? For starters, the enthusiast fringe wasn't entirely trustful of hybrid-enhanced performance when the 2013 NSX concept was unveiled, a skepticism no doubt fueled by the reality that whiz-bang hybrid hypercars like the Ferrari LaFerrari, Porsche 918 Spyder, and McLaren P1 had yet to prove their mettle in the real world.

Since the 2013 concept car, the final model has grown in size: the new NSX is an inch wider, 0.6 inches taller and 0.8 inches longer in wheelbase, while overall length has been stretched 3.1 inches. The twin-turbocharged V6's hybrid assistance comes from two motors up front (for torque vectoring), and a direct-drive unit at the rear. Accommodating the NSX's immense capacity for heat generation are no fewer than 10 cooling units: three for the engine, two for the intercoolers and nine-speed dual-clutch transmission, and single units for the twin electric motors and power distribution unit. The production model's dramatic looks are attributable to its more cab-forward design, not to mention the addition of numerous inlets, scoops, and spoilers, and more deeply sculpted body panels with a floating C-pillar, à la BMW i8. 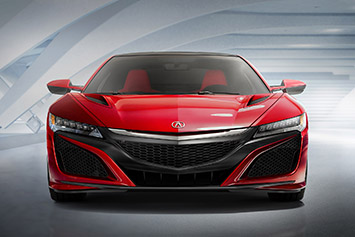 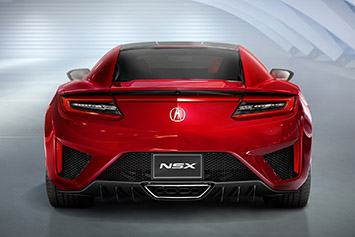 The move from flush surfaces to aero effects came from what Exterior Design Project leader Michelle Christensen calls a "dance [of air] around the car," which recalls a domino effect initiated by the need for greater cooling from the addition of turbos. The hood vents were relocated and grew to roughly triple their original size, which in turn necessitated other changes, since the more air enters the vehicle, the more that air also needs to exit. Because inlets and vents often upset the flow of air, further elements were needed to redirect windflow and ensure that lift/downforce points are optimized, creating a sort of ripple effect on surface treatments. Suffice it to say, the new aerodynamic elements have been implemented to serve two masters: systems cooling and the creation of downforce.

If you were to follow the hypothetical path of a single molecule of air from the NSX's nose to its tail, that molecule has the potential to take a rather circuitous trajectory. It might enter the front radiator, pass through the brakes for cooling, exit again through the fender vents only to re-enter the side vents to the intake and intercoolers, or possibly pass through the flying buttress, creating downforce as it passes over the rear-deck surface. That's a whole lot of detours along the way. Perhaps in an effort to maintain a thorough line of design, several chrome surrounds and ornamental elements have been ditched in the redesign process. "We wanted to keep that initial theme," says Christensen, "but once we realized it wasn't working, we said if it's not functional, let's delete it. We simplified many areas," she adds, "and I think it actually helped mature the design."

Deep beneath the NSX's skin, a multi-material, aluminum-intensive chassis incorporates a first-ever casting process that manages to deliver the strength and ductility characteristics of a forged metal. Details are scarce on exactly how Honda achieved that balance, but the manufacturer claims there will be 100 specialists within their Marysville, OH plant focused on this particular area of expertise when NSX production starts there in the fall of 2015. Carbon-fiber flooring helps provide a strong structural backbone that isn't required to support impulsive crash loads, and a first-of-its-kind 3D formed ultra-high-strength steel A-pillar enables thin construction to help maximize outward visibility. All-aluminum independent front and rear suspension will be aided by brake torque vectoring, and both the steering and braking systems will be electric, the latter incorporating carbon ceramic units in the form of six-piston front and four-piston rear Brembos. 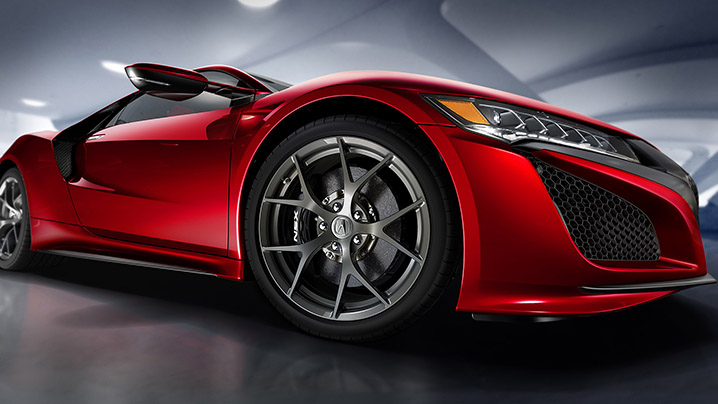 Despite its relatively conservative interior treatment, the cabin does have subtle details that point to the NSX's uniqueness, namely the multifunction TFT display and the instrument panel frame, a structural element visible around the nav screen and along the passenger side of the dashboard. The stretch of aluminum is artfully sandwiched between an Alcantara lower piece and a leather-wrapped upper section and finished in a tasteful satin texture with delicately radiused edges. As with the original NSX, a premium has been placed on outward visibility along with the ergonomics unique to high performance driving, as evidenced by the console padding where your leg might brace itself during hard cornering. Interior Design Project Leader John Norman recalls outstanding visibility as a big part of the NSX experience. "It was like the invisible car," he says of the original, "You're driving the car and then it just – it goes away, and it's just you and the road. We realized that that was just incredibly vital. If this was going to be an NSX," he says, "it had to have that feeling." 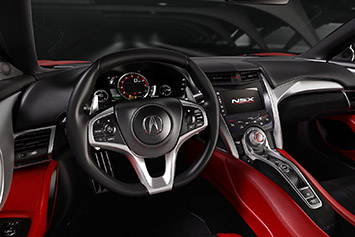 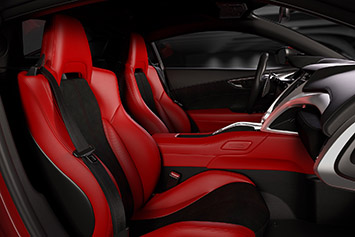 The NSX is estimated to start at around $150,000. Considering key benchmark vehicles include competition like the Audi R8 V10, Ferrari 458 Italia and Porsche 911 Turbo, if it performs well, it's safe to say the NSX will be something of a value proposition when customer orders are accepted in summer of this year.

Though it packs tantalizing technology and an ambitious all-wheel drive hybrid powertrain beneath its late-breaking dramatic looks, Acura is withholding a number of key specifications including engine output, curb weight and drag coefficient until further notice. "Because it's a hybrid," Klaus reasons, "[those numbers] could be easily misunderstood."

Despite the coy aversion to spec sheets and bottom-line numbers, what we've seen of the NSX so far indicates Acura has gone to great lengths to respect – and in many ways redefine – the qualities that made its forbearer one of the greats. By refining its clarity of vision and redirecting efforts to make the NSX even better than originally intended, Acura hopes its new supercar will be every bit as exceptional on roads and racetracks as it seems on paper.