Buick is reentering the convertible game after a 25-year absence with this, the long-awaited 2016 Cascada. Fans of General Motors' European operations will recognize this svelte, four-place droptop as a rebadged version of the critically well-received Vauxhall/Opel Cascada, a model that has been on sale to audiences across The Pond since 2013. The Cascada will once again give American car buyers the chance to buy a relaxed, affordable two-row convertible without sporting pretensions, an option that arguably hasn't been available since the demise of the Chrysler 200 droptop.

For US duty, the softtop Cascada will arrive with a 1.6-liter, direct-injected, turbocharged four-cylinder that churns out 200 horsepower. That figure is paired up with 206 pound-feet of torque, which can be bumped to 221 lb-ft via an overboost function. A six-speed automatic will dispatch that power to the front wheels, which are managed courtesy of a HiPer strut front-suspension system. While the Cascada might share its front suspension with the setup found on the Regal, its torsion-beam rear suspension has more in common with the Vauxhall/ Opel Astra (and Buick Verano) on which it's based. 20-inch wheels and an electric power-assisted steering system round out the convertible's handling hardware.

Of course, we doubt most Cascada customers will care about such oily and unseen things. Instead, they'll be more focused on the droptop's sheetmetal, which, considering it's basically a convertible version of the extremely handsome Astra, should win the car at least a few fans. While we only have so much detail to work with in the images that have been released so far – we'll be seeing the Cascada firsthand this evening (Sunday), so check back tonight for additional live images later today. 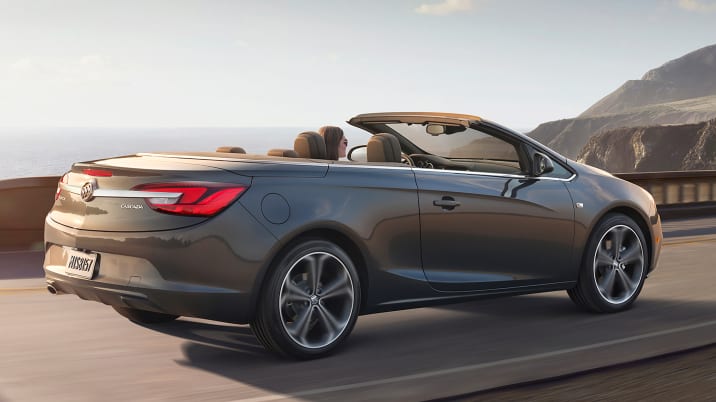 Naturally, the Vauxhall/ Opel grille will be replaced by Buick's trademark waterfall grille, although the company's other big styling calling card, portholes, are absent from our current pair of shots. A wide chrome strip stands out on the rear, tying the taillights together and increasing the Cascada's resemblance to the Regal sedan. A single oval exhaust tip juts out from the driver's side rear bumper.

Sun worshippers interested in the Cascada should be pleased to hear the softtop will lower itself in just 17 seconds, and can be dropped at speeds of up to 31 miles per hour. Buick didn't mention how long it will take to replace the roof, nor whether it can be done at speed, though. Beyond that, the new convertible features the typical suite of infotainment features, including Buick's IntelliLink system and 4G LTE connectivity. Heated front seats and a heated steering wheel should be able to extend convertible season regardless of how vile your winter weather might be.

The 2016 Cascada will arrive on the market early next year, with pricing to be announced closer to its onside date. As we said, check back later tonight for live images of the Cascada's unveiling, ahead of the 2015 Detroit Auto Show.
Show full PR text
Top-Down Luxury Returns with 2016 Buick Cascada

The Cascada will be the first Buick convertible offered in North America in 25 years and the latest globally developed vehicle to join the brand's growing portfolio. It goes on sale in early 2016.

"The new, 2016 Buick Cascada is a beautiful, engaging convertible that represents the very best of the brand's global development practices," said Duncan Aldred, vice president of Buick. "It's a car that will delight customers with its fun spirit and help drive the momentum that's fueling Buick's success."

And when it comes to dropping the top on a whim, it lowers in only 17 seconds at speeds up to 31 mph. When it's up, superior thermal and acoustic insulation contribute to driving comfort.

"Cascada's driving enjoyment is rooted in technologies that make it more comfortable and refined," said Aldred. "Its features work harmoniously to provide a safe, connected and confidence-inspiring driving experience."

Technology and safety highlights include:
• Buick IntelliLink with a seven-inch-diagonal color touch screen featuring Text Message Alerts, Siri Eyes Free for Apple phones with an iOS 6 or newer operating system and navigation
• OnStar 4G LTE with built-in Wi-Fi hotspot
• Electronic rear-seat entry system automatically powers the front seats forward by simply pressing the seatback forward. It moves the seats back when the seatback is returned to the upright position
• Electric safety belt presenters that use telescopic arms to slide the upper front safety belt assemblies from behind the front seat into closer reach for easier buckling
• Rollover protection bars that deploy behind the rear seats when the possibility of a rollover is detected
• Lane departure warning, rear park assist, rearview camera and Rainsense windshield wipers.

Distinctive design and thoughtful features
Designed from the outset as a convertible, the Buick Cascada has a flowing, sculpted profile, with fast-raked A-pillars that convey a wind-in-the-hair flair. When lowered, the top folds neatly and completely beneath a hard tonneau behind the rear seats, giving the car a pure open-air aesthetic.

"The Cascada's design blends the suggestion of speed with sophisticated and uncompromising details," said Holt Ware, Buick exterior design director. "Most convertibles are designed from existing coupes or sedans, meaning stowage of the top is an afterthought, but not this Buick. It looks handsome and has a premium appearance when the top is lowered – and a perfect, seamless profile when it's up."

Chrome trim bridges between the wing-shaped taillights, which are also LED-lit.

The Cascada also has plenty of storage space for the trappings of a weekend getaway, including 13.4 cubic feet (380 liters) of cargo room with the top up and 9.8 cubic feet (280 liters) with the top down. The rear seatbacks fold down electronically to expand cargo capability for longer items.

Turbocharged performance, engaging driving experience
The Cascada is driven by a 1.6L turbocharged engine rated at 200 horsepower (149 kW). With more than 100 horsepower per liter, it's one of the most power-dense engines in the segment. It delivers strong torque, estimated at 206 lb-ft (280 Nm), with an overboost feature that briefly pushes torque to an estimated 221 lb-ft (300 Nm).

Direct injection and variable valve timing complement the turbo engine's performance with efficiency. It is backed by a six-speed automatic transmission.

Power from the turbocharged engine is translated into driving enjoyment via the innovative suspension system, which employs the sophisticated HiPer Strut front suspension pioneered on the LaCrosse and Regal.

HiPer Strut is based on the MacPherson strut design and features dual-path top mountings that separate the transfer of spring and damper loads to the body structure. It enhances ride and handling by reducing torque steer; more linear and communicative steering through improved camber control, and improved impact isolation on bumps and rough surfaces.

A rigid body structure features high-strength steel in strategic areas, reinforced side sills and press-hardened steel in the A-pillars. It is the foundation for the Cascada's driving experience, contributing to steering precision, ride quality and quietness – as well as safety. A 106.1-inch (2,695 mm) wheelbase enhances ride smoothness while enabling greater rear-seat legroom.

Buick is an international modern luxury brand offering vehicles with sculpted designs, luxurious interiors and thoughtful personal technologies, along with responsive-yet-efficient performance. Buick is attracting new customers with its portfolio of award-winning luxury models in North America and China. Learn more about Buick cars and crossovers at www.buick.com, on Twitter @buick, on Instragram, on Pinterest or at www.facebook.com/buick