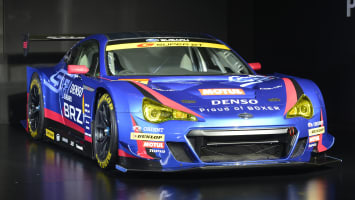 While we gear up for next week's Detroit Auto Show, the 2015 Tokyo Auto Salon is currently on going, and Subaru has marked the occasion by trotting out a pair of new racers.

First up, we have the car shown above, with the company's entry to the 2015 Nürburgring 24 Hour Race. Subaru is entering a WRX STI in the grueling endurance race, which runs from May 14 to May 17. The left-hand-drive racer has received a fair crop of upgrades for endurance duty, although Subaru didn't really bother to elaborate on them, unfortunately.

Next to the N24 car, Subaru introduced a striking version of its rear-drive BRZ, destined for the Japanese Super GT series. The team campaigning the BRZ will be led by Subaru's Hideharu Tatsumi, who will also be one of the drivers for the Nürburgring effort. Again, Subaru hasn't offered any info on technical changes for the BRZ GT300.

Scroll down for the brief press release, and then check out the galleries of both cars.
Show full PR text
2015 SUBARU Motorsport Activities

STI will participate in the Nürburgring 24-Hour Race (from 14 to 17 May in Germany) for eight consecutive years, with a vehicle whose performance has been enhanced from its base car – the Subaru WRX STI.

The race car's performance such as aerodynamics, stability, body rigidity and engine output have been enhanced compared to the previous model. In addition, visibility for racing flags has also been improved by introducing a left-hand drive car.

Like last year, Hideharu Tatsumi will take the helm of team operations as team manager, in addition to the development of the car. The drivers are Sasaki (Japan), Lasée (Germany), van Dam (Netherlands) and Tim Schrick (Germany), the winner of 2014 VLN endurance racing championship who newly joins the team.

Subaru, with the "SUBARU BRZ GT300" race car, will participate in the SUPER GT series this year as well, widely regarded as Japan's top motorsports category. The race car employs the same front-engine, rear-wheel-drive layout as the production BRZ model.

The team manager will be Hideharu Tatsumi, the team will be operated in conjunction with "R&D SPORT" led by Director Shinji Motojima, and Takuto Iguchi and newly joined Hideki Yamauchi will be driving for the team. In addition, Dunlop tires which have been used in the Nürburgring 24-Hour Race will be employed for the "SUBARU BRZ GT300" race car.