Pete Bigelow
Red-light cameras may be less effective at improving traffic safety than many transportation officials believe, according to a new study.

Researchers from the Texas A&M Transportation Institute analyzed accident data from 90 intersections in the city of Chicago, which runs the largest red-light camera program in the United States. Rather than reducing accidents, they found there were more crashes at intersections once they were equipped with cameras.

The number of overall crashes at the red-light camera intersections included in the study was 1,064 over a three-year period, about 5 percent more than would have otherwise been projected, though it's important to note that the study has a 4 percent margin of error.

Of greater significance, the study found the cameras are both more helpful and more harmful, depending on the type of accident documented. Researchers recorded a 15-percent decrease in right-angle crashes at the intersections. At the same time, rear-end collisions rose by 22 percent.

With automated traffic enforcement becoming a controversial topic in recent years, the Texas A&M findings give credence to critics' complaints that the presence of red-light cameras merely trades one type of accident for another while producing no net effect on safety.

"Some people say it's better to reduce right-angle crashes because they're usually more serious in severity, but other people say we should reduce all crashes, not just a certain type," Dr. Dominique Lord, the study's author, told Autoblog. "Is that fair? That's not for me to answer. I know there's a lot of politics involved in this. I stay out of that. I just look at the data."

Elected officials have largely avoided such questions. The Chicago Tribune says that Rahm Emanuel, the city's mayor, has declined requests to discuss the results of the study, which was commissioned by the newspaper. Red-light cameras have been a fierce topic of controversy in Chicago over the past year.

The Tribune has documented irregularities and mismanagement in the program, which may have cost innocent motorists millions in undeserved tickets. In separate investigations, the newspaper has revealed how transportation officials shortened the timing of the city's yellow lights to less than three seconds per yellow, the federal government's minimal standard. By shaving off fractions of a second, the city raked in $7.7 million in tickets. 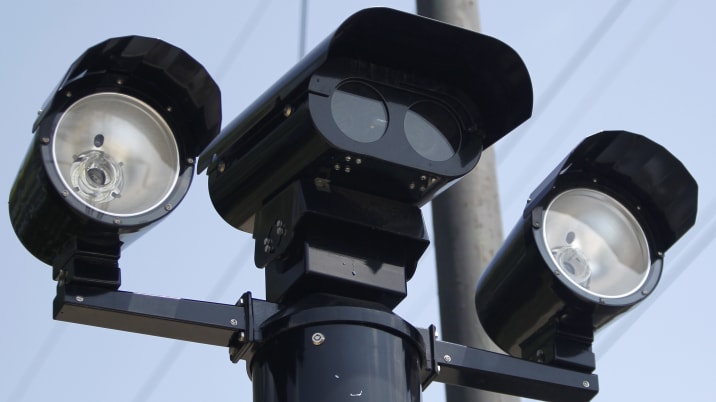 Earlier, the news organization showed the city's red-light cameras produced unexplained spikes in violations that often gave tickets to motorists who had committed no violation.

Last August, a federal grand jury returned a 23-count indictment against Karen Finley, the ex-CEO of RedFlex, the company that produced and managed the city's automated enforcement equipment. She stands accused of bribing two Chicago transportation officials in (successful) efforts to land contracts worth $124 million from the city.

Amid that backdrop, and proclamations from city officials that the cameras have reduced right-angle crashes by 47 percent, Lord found the cameras may be not be doing as much to enhance safety as believed. Although there are approximately 350 red-light cameras in the city, the study focused on 90 cameras at four-way intersections where full data sets were available.

The results were similar to an earlier study Lord conducted in Quebec, which also showed a drop in right-angle crashes and a rise in rear-end collisions once red-light cameras were installed. Though it's not specifically addressed in either study, the rise in rear-end collisions is thought to be influenced by motorists who hit their brakes once they realize they're driving in an automated enforcement zone.

Texas A&M's Chicago findings are in line with a 2005 study conducted by the Federal Highway Administration, which found red-light cameras delivered a 25-percent decrease in T-bone crashes while increasing rear-end collisions by 15 percent at 132 intersections analyzed across multiple jurisdictions.

While it may be tempting to draw broad conclusions, Lord cautioned against them, noting that traffic conditions, types of road involved, duration of yellow lights and other factors vary from site to site, and all can affect accident figures beyond the scope of a red-light camera.

"Cameras have a role and they have worked well elsewhere, so I think they have their place," he said. "But once they're installed, there should be an analysis on how they're performing. It's important to remember that when you're talking about reducing accidents, cameras are one tool among many available, and they should all be examined."
X