How GM engineers are using diaper 'snow' to keep you warm

Chris Bruce
Testing how snow affects General Motors' vehicles isn't really a problem right now for the company's engineers, but in the dog days of summer the process isn't exactly easy. The only real option is for them to book time at the automaker's climatic wind tunnel. However, a flash of brilliance from an engineer allows snow to be simulated regardless of the temperature outside, and the discovery is all because of his daughter's wet diaper. 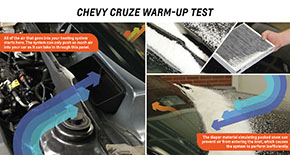 The realization came to GM Thermal Systems engineer Nicholas Jahn while he was swimming with his daughter and noticed how her diaper ballooned in size in the water. He found out the substance that makes this possible is called sodium polyacrylate. When the material gets wet it grows and forms fluffy flakes that are a close imitation of snow. Best of all, the stuff can be prepared easily any time of the year, and it's reusable.

The engineering team uses the material to test the effectiveness of the heating systems of GM's vehicles. They spread the sodium polyacrylate over the inlets at the base of the windshield to obstruct the airflow and then crank the heater. After some time, they can see how much is being sucked into the system and design more efficient systems in the future. See how the process works in the video above and read about the diaper discovery in GM's press release below.

DETROIT – An item commonly found on an infant's changing table is helping General Motors' engineers simulate snow year round, ensuring heating systems in cars like the 2015 Chevrolet Cruze can quickly and efficiently warm its interior.

Packed snow can prevent air from entering the inlet panel at the bottom of the windshield, obstructing the flow of air into the heating system and reducing the amount of air it can push out. This can lead to less efficient warming of the car's interior and windshield defrosting.

"The last thing anyone wants to do when it's freezing cold out is scrape their windshield," said Nicholas Jahn, GM Vehicle Thermal Systems engineer. "The testing we perform on the Chevrolet Cruze with the diaper material allows us to maximize the car's heating capabilities."

Ironically, Jahn stumbled upon his diaper-based testing method in the middle of summer. During a swim with his daughter, he noticed her diaper multiplied in size when it came into contact with water. After some research, he found that sodium polyacrylate – the absorbent material found in diapers – starts as a powder but turns into a snow-like substance when saturated.

In Jahn's test, he sprinkled the reusable snow onto the air inlet vents along the bottom of the Cruze's windshield, then started the car and let it idle. After a few minutes, Jahn removed the inlet panel and inspected how much snow was sucked into the system and how much of the intake vents remained blocked.

Before discovering the material, Jahn had to either rely on Mother Nature to provide snow, or find a schedule opening at one of GM's state-of-the-art climatic wind tunnels. Sodium polyacrylate, however, can be used anywhere, at any time, and in any season. Better yet, when the material dries, it can easily be reused.

A more efficient heating system especially benefits those who use the OnStar Remote Key Fob services, which allows drivers to remotely start their car from anywhere with a cellular connection. As part of the OnStar Basic Plan, Remote Key Fob services - remote start, lock, unlock and activate horn and lights – is free for five years on all new, properly equipped GM vehicles.


Founded in 1911 in Detroit, Chevrolet is now one of the world's largest car brands, doing business in more than 140 countries and selling more than 4.9 million cars and trucks a year. Chevrolet provides customers with fuel-efficient vehicles that feature spirited performance, expressive design, and high quality. More information on Chevrolet models can be found at www.chevrolet.com.