The Art Of Polarization, Take Two

View All Specs
Add a Review
When BMW unveiled the X6 back in 2008, critical reviews were mixed, to say the least. By all accounts, the heavyweight crossover actually drove quite well, but the idea of a BMW X5 that traded a lot of functionality for polarizing looks and a higher price tag seemed like a tough sell. Then it went on sale and quickly proved to be a cash cow. Today, the German brand has moved over a quarter million of the things worldwide.

Unsurprisingly, this success has moved BMW to double down on its so-called Sport Activity Coupe by adding a smaller variant. The all-new X4, while not a bad steer in and of itself, makes even less sense than its big brother, particularly when viewed alongside BMW's other offerings.

Like the X6 and X5, the X4 borrows heavily from another of the brand's utility vehicles, in this case, the less-costly X3. Also like the X6, this new crossover-coupe's styling is sure to cause a schism among critics and consumers alike.

You can probably guess where the majority of the Autoblog camp falls. To be totally frank, the exterior of the X4 is simply ghastly to this writer, particularly in this tester's eye-catching paint. Admittedly – and much like the X6 – there's not much objectionable from the A-pillar forward, where the X4 has a lot in common with the X3. It's only once moving towards the rear that things well and truly go wrong. There's just so much visual mass, and it's been made worse by the way BMW designers wussed out. 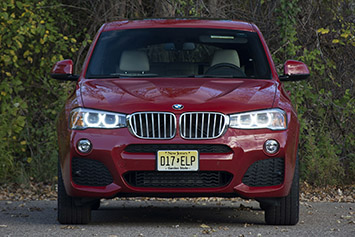 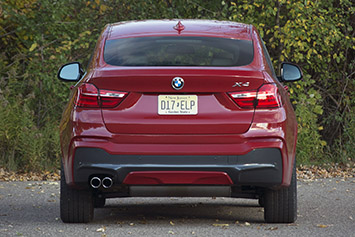 Compare the profile of the X6 with the X4, and pay particular attention to the roofline on the bigger vehicle. The angle of the roofline is noticeably more dramatic on the X6, which comes at the expense of second-row headroom (an oft-criticized area for the big boy). For the X4, designers tried to have their cake and eat it too, maintaining second-row headroom but with a coupe-like profile. The result is an X4 that is bulbous and uncouth from the B-pillar back, more hunchbacked Gran Turismo than svelte Gran Coupe.

BMW might have been better served if its exterior work had followed the stylings of the cabin, which is more or less a clone of what's on offer in the X3. Material quality is still great, with soft-touch plastics and available cool-to-the-touch brushed aluminum throughout. I really dug the Ivory White Nevada leather and contrast red stitching on this test vehicle, as it provided an eye-pleasing departure from the sea of blacks, grays and tans so typical of the luxury crossover market.

Considering its similarities to the X3, it's hardly a surprise that the X4's cabin is a great place for the driver. The X4 M Sport's seats provide far more support than the average CUV driver will ever need, offering various bolster adjustments and a leg cushion extension, in addition to its normal suite of manipulations. I was delighted to find that BMW resisted the urge to fit the oversized steering wheel of its M cars in favor of a smaller, more traditional thick-rimmed wheel. 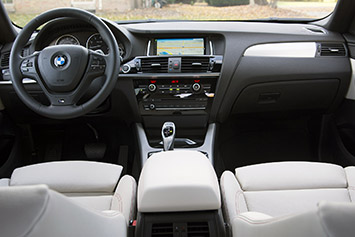 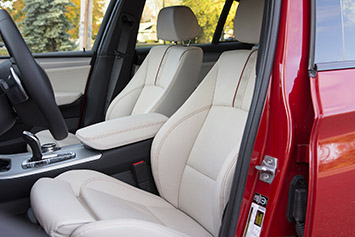 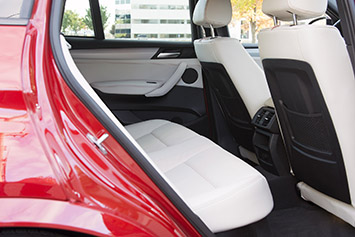 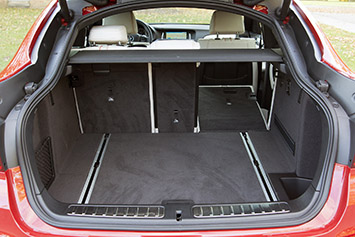 Meanwhile, those back seats are actually usable for adults. My six-foot, one-inch frame had little issue entering or exiting the second row, and the average grownup should have no qualms about the amount of available head- and legroom. Even the luggage space is adequate in the X4. There are 17.9 cubic feet with the second row up, which is admittedly a substantial 10 cubic feet less than the X3, but that's not bad. Fold the second row down, however, and that expands to 49.4 cubic feet (about 14 cubic feet shy of the X3). Interestingly, the X4's cargo space almost mirrors that of the 4 Series Gran Coupe and its 17 cubes of seats-up capacity and 45.9-cu-ft maximum.

Like the X3 (and 3/ 4 Series), the X4's top-end engine is BMW's well-regarded 3.0-liter, turbocharged inline-six. That's not what you see here, though. Instead, this review samples the entry-level xDrive28i model and its 2.0-liter, turbocharged four-cylinder, complete with 240 horsepower and 258 pound-feet of torque, available from 1,450 rpm on up to 4,800 rpm. The entire affair is mated up to the familiar combo of a ZF eight-speed automatic and xDrive all-wheel-drive system.

The problem with the X4 is that it's a very heavy vehicle, tipping the scales at 4,130 pounds. That, according to BMW's consumer website, is just 20 pounds shy of the X3, but it's nearly 400 pounds more than an all-wheel-drive 428i Gran Coupe. Despite sandwiching its brethren on the scales, the X4 unsurprisingly can't match either vehicles' efficiency ratings. The X4 returns an unimpressive 20 miles per gallon in the city and 28 mpg on the highway, while the X3 matches the highway rating and does one better in the city and the 4GC will net 22/32. 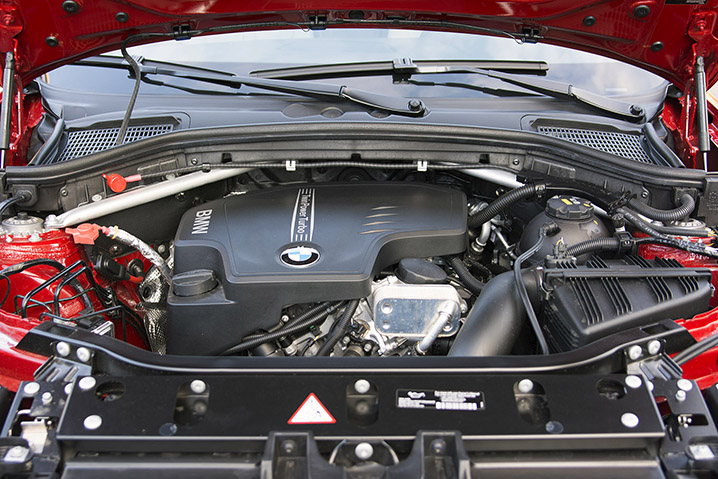 Besides the impact on fuel economy, the X4's heft has an impact on its acceleration, though not as much as you might think. According to BMW, sixty miles per hour arrives in a perfectly respectable six seconds. That matches up favorably with the 6.2-second time of the X3, although it can't hold a candle to the zippy 5.7-seconds of the Gran Coupe.

Metrics aside, the X4 certainly doesn't feel underpowered; that's just part of the 2.0-liter, turbocharged four-cylinder's goodness. With 258 lb-ft of torque spread so liberally across the tachometer, grunt can be summoned fairly easily, provided you keep the turbocharger spooled and maintain a tight leash on the eight-speed automatic. Compared to other BMWs with this powertrain, the X4 oddly seems to exhibit more turbo lag, and its gearbox isn't as sure of itself on downshifts. Both of these issues are minor but bear mentioning, if only because Munich generally manages to avoid such miscues.

The 2.0T's soundtrack is, to be honest, so familiar that it's kind of generic at this point. That isn't to say it's bad – the turbo four sounds smooth and refined, and doesn't intrude annoyingly into the cabin, even when revved properly hard. In fact, the X4 is very quiet in general. Wind noise was never an issue during our test, and even with the optional 19-inch wheels of our tester, road and impact noises were muted and well mannered, too. 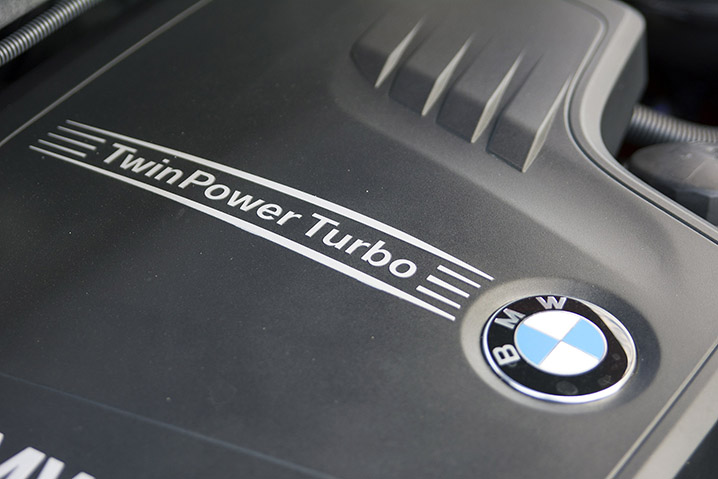 That's a notable accomplishment, largely because BMW didn't seem to make very many overt concessions in the ride and handling department. Our tester is of the M Sport variety, meaning it arrived with the aforementioned 19-inch hoops and a stiffened sport suspension. The result, despite its visual and physical mass, is a vehicle that's a far more talented dancer than one might think. It feels considerably sharper and more agile than a comparable X3. Most importantly, though, is that it corners flatter, owing partially to its lower ride height, and it generally feels more confident and competent through the bends. Feedback remains limited through the chassis, although the numbness of the steering and vague turn-in – an epidemic among BMWs of the past several years – are larger annoyances.

The downside is that there are more comfortable vehicles out there. The X4 tends to feel a bit choppy over rough or uneven roads. It isn't an issue of too much vertical motion – the X4 remains planted throughout – it's more that the large wheels, run-flat tires and firmer suspension don't do a good enough job of ironing out imperfections.

Were I in the market, I'd compromise on the X4's ultimate handling behavior by ditching the M Sport trim and its stiffer suspension and larger wheels. Dropping down to the standard setup (or perhaps selecting the optional $1,000 adaptive dampers) and going to the standard 18-inch wheels may soften up the X4 enough while retaining the lion's share of the X4's flatter, more progressive character in the corners. 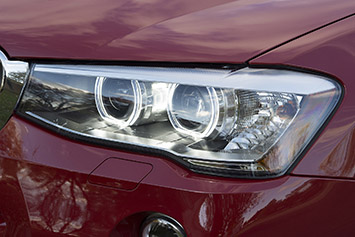 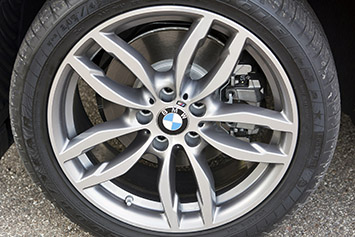 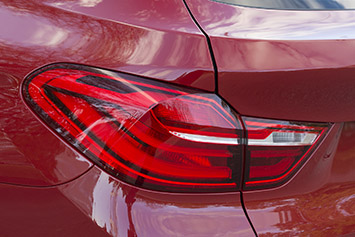 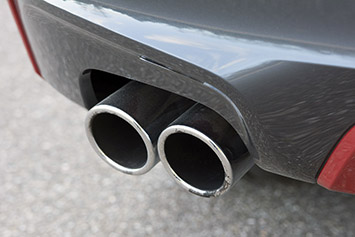 Prices for the xDrive28i start at $44,700, not counting a $950 destination charge. That's $2,400 more than a 428i xDrive Gran Coupe and $4,200 more than an X3 xDrive28i. For that sum, you get standard Xenon headlights, Driving Dynamics Control (BMW's user-defined drive mode selector), a powered tailgate, push-button start, auto-dimming interior and exterior mirrors and automatic climate control. Our tester added on a number of packages and standalone options and could be quite happily described as "reasonably equipped." Along with the $2,300 M Sport Package (sport suspension, 19-inch wheels, sport seats, M steering wheel, aero kit and anthracite headliner), this model was equipped with the $700 Driver Assistance Package (rearview camera and park distance control) and the $2,200 Premium Pack (smart key, power lumbar support seats and satellite radio). Heated front seats ($500), iDrive with navigation ($2,150) and an enhanced Bluetooth/USB connection ($500) were helpful standalone options. Finally, our tester's Melbourne Red Metallic paint tacked on an extra $550 for a grand total of $54,550, including destination.

I wholly recognize that there are buyers out there that want a more crossover-like ride height and seating position in a more avant-garde package. Buy the X4 and you'll likely be thrilled, because it's quite good in a vacuum. But for a set of very simple reasons, I cannot give the 2.0-liter version of this CUV my blessings. Aside from the ride height and seating position, a 4 Series Gran Coupe is a better, more useful vehicle in nearly every way. 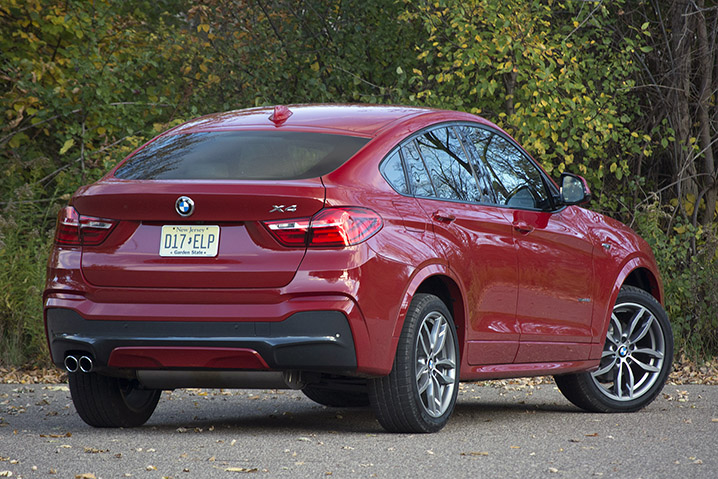 A 4GC will, inarguably, be faster, handle better, cost less and be more efficient. For those worried about space, the two vehicles have almost the exact same amount of cargo room, while the X4's backseat only has 1.1 inches more legroom and 0.2 inches more headroom. Plus, the front row on this vehicle actually offers 1.8 inches less legroom and has a negligible advantage on headroom, although the wider X4 offers more shoulder room both front and rear (2.4 inches and 1.7 inches, respectively). And besides, if you don't want a car, almost all of the above arguments could be made for the X3, which costs quite a bit less.

Like the X6, BMW's latest boundary pusher is likely going to appeal to a limited group of customers who will be very happy to drive around in something so different. For the rest of us, though, the X4's odd looks and layout won't be enough enough to woo our dollars away from its more competent and versatile cousins. 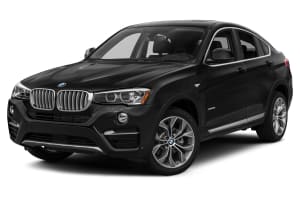