Unfiltered Fun For The Price Of A Honda Civic Because I'm a reasonable human being and firmly believe that vehicle styling is a subjective matter, I drew some perspective on my borrowed 2015 Polaris Slingshot from fellow Los Angeles residents.

I queried my 17-year-old neighbor whom I caught ogling the trapezoidal ride in my driveway: "It's weird looking, isn't it?" I hinted. Admittedly, the witness was being led by the pointed question, but he was too busy scraping the sidewalk with his jaw to notice. "It's fantastic!" he blurted without pause, much as my teenage self would have at the sight of a Vector W8 or a Bugatti EB110.

Later that day at the famed (and awfully clichéd) Mulholland Drive, I was stopped on the shoulder when a middle-aged woman slowed, lowered her window and screamed, "What is it?!" "It's a Polaris Slingshot," I replied, suspecting the zingy model name might stop her in her tracks. "It's beautiful!" she bellowed, firing yet another bullet into my personal bias.*

Along the same stretch of road, a glamourpuss Range Rover driver pulled up alongside me at a red light, smiled, and lowered her rear window, revealing a young boy who – you guessed it, was also beaming at the Slingshot.

Despite the plethora of high-dollar exotica I've been fortunate enough to pilot on LA roads, few have snapped necks as consistently as this curious contraption. The kicker? My base model tester's MSRP is about what you'd expect to pay for a Honda Civic.

* Whether I believe the Slingshot is the greatest piece of automotive art since the Series I Jaguar E-Type or a visual abomination that should be killed with fire is beside the point; enthusiasts dig what they dig, and my opinion about the Slingshot's styling doesn't-and shouldn't-affect yours. As they say in the two-wheeled world, ride your own ride... 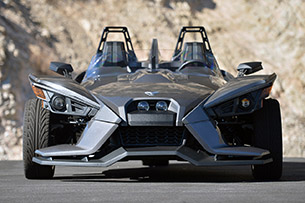 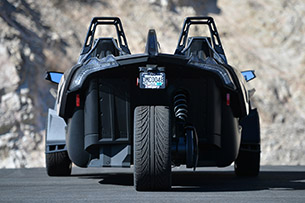 
The Polaris Slingshot is neither a car nor a conventional motorcycle.

In case you're unfamiliar with the tube-framed enigma that is the Polaris Slingshot, this Spirit Lake, Iowa-built three-wheeler is neither a car nor a conventional motorcycle, a distinction (or lack thereof) that has led it be banned in Texas, of all lightly regulated places. According to Polaris brass, the inspiration to create the Slingshot came from the desire to build a paradigm-shifting vehicle – a distinctly familiar battle cry that recalls BRP's stance on its Can-Am Spyder, also a reverse trike design.

As such, the Slingshot combines killer motorcycle-derived elements like a single-sided aluminum swingarm, tubular steel frame, and wind-in-your-face exposure with automotive killjoys like electronic stability control. Further confounding the three-wheeled paradox for motorcyclists and cagers alike is the inability to lane split, the lack of a crumple zone or airbags, and the impossibility of leaning into corners. "It's a three-wheeled motorcycle!" Polaris insists, but the Slingshot's side-by-side seats and steering wheel still confound some, including the aforementioned Great State of Texas.

The base model, available in any color as long as it's Titanium Metallic (or gray plastic, if you're pragmatic) runs $19,999. Opt for the $23,999 SL, and you'll get Red Pearl (i.e., crimson plastic) along with bigger wheels, a small windshield, and a 4.3-inch screen with a backup camera, USB input and a Bluetooth-equipped six-speaker stereo system. Those options (worth about $5,000 when ordered individually) can be added to the base model as à la carte items. 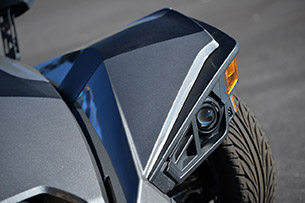 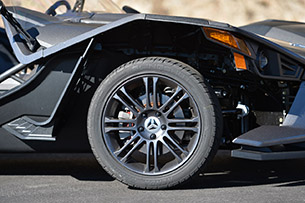 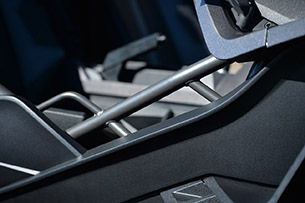 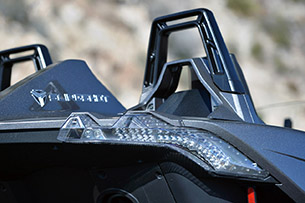 
Don't go checking your cell phone in traffic unless you want the world to know you're a distracted driver.

The Slingshot's inspirations become clear when you swing a leg into its bare bones cockpit and nestle into the squared off – yet surprisingly comfortable – vinyl seat This thing feels like the love child of a speedboat, a side-by-side and a glorified go kart, with a smidge of snowmobile DNA thrown in for good measure.

Getting in is surprisingly easy thanks to the angled aperture where a door would typically reside, and there's no stooping or head tilting required due to the infinite headroom above. Though the body panels over the front wheels are flared rather dramatically, the view is generally clear ahead and downright transparent from either side; don't go checking your cell phone in traffic unless you want the world to know you're a distracted driver. Rearward visibility is disconcerting, due to the massive structure behind the seats which bolster the forged aluminum roll hoops.

And then there's the Slingshot's interior – or, shall we say, the insides, which are about as lavishly outfitted as a SeaDoo. There's a tilt-adjustable rubber-rimmed steering wheel (which weirdly wears a Daimler-esque three-pointed star), plastic floorboards, an analog tach and speedo with small LCD screen, a centrally positioned traction and stability control-disabling rocker button (YES!)... and air. Lots of air.

The Guts Of The Matter


The Slingshot is a stunning 755 pounds more waifish than a Mazda MX-5 Miata.

The Slingshot's distinct lack of hardware directly benefits its purity of purpose. Powered by a 91-octane-consuming 2.4-liter EcoTec four-cylinder that produces 173 horsepower and 166 pound-feet of torque, this three-wheeled bad boy tips the scales at only 1,725 pounds (1,743 lbs for the SL version). That's more than 200 pounds lighter than the late, great featherweight Lotus Elise, and a stunning 755 pounds more waifish than a Mazda MX-5 Miata (which, incidentally puts out a near-identical 167 hp). Power goes through a five-speed manual transmission (huzzah!), driving the rear wheel via a carbon fiber-reinforced belt. Because the gear and final drive ratios are identical, the base model's slightly smaller wheels enable incrementally quicker acceleration, while the SL's larger setup offers a slightly higher top speed.

Turn the key and press the big, red, Battlestar Galactica-style ignition button, and a boomy exhaust note emanates from the front of the Slingshot. The strange sonic geography comes from the short header exhaust, which dumps spent engine gases just aft of the front wheels. There's a bit of aural unevenness throughout the rev range (presumably due to the short-length exhaust system that doesn't allow the hot airflow to fully resonate or "even out"), lending the Slingshot an air of artificially amplified sportiness. 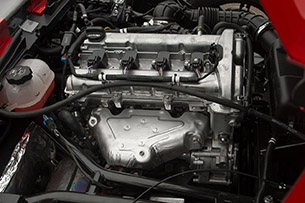 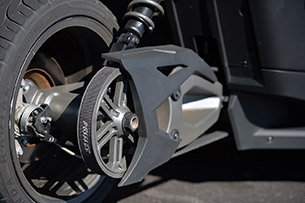 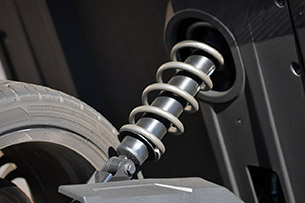 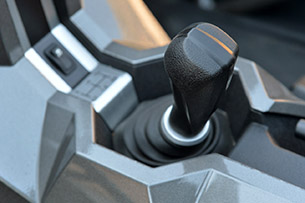 Power shift, and it'll light up the tire between first and second gear. Drive like an even bigger donkey, and it'll chirp into third.

Gear engagement is clean and positive, requiring a bit of a shove that conveys a sense of mechanical stoutness, and letting out the clutch doesn't require much throttle to accelerate from a standstill. There's decent torque at lower rpms, but the EcoTec engine shines in the midrange, where it easily pulls the Slingshot's diminutive mass forward. Throttle response isn't as crisp as it could be, and the engine's asthmatic performance at higher rpms is likely to disappoint the rev-happy. However, tagging the right pedal in the midrange makes the base model's 265/35R18 proprietary Kenda tire squeal with delight; power shift, and it'll light up the tire between first and second gear. Drive like an even bigger donkey, and it'll chirp into third.

Once you become acclimated to this open-air environment, your drive becomes less about getting from A to B and more about gaming the system for wheelspin on public roads. Even with electronic aids on, it's easy to get the rear wheel rotating, which actually discourages flipping the switch since the thrill threshold is high out of the box. Further obviating hitting that button is the reality that the stakes feel (and are) significantly higher than a car's when you're nestled inside this low-slung creature. Wanna pass that slowpoke around a blind corner? The image of overcooking it and faceplanting into an oak tree seems that much more dissuasive when you're strapped into a steel cage that lacks even the most rudimentary safety equipment. There's a reason you're legally required to wear a helmet in states where they're the law, and it all goes back to Polaris's assertion that the Slingshot isn't a car, but rather a motorcycle that happens to have three wheels.

Despite its rambunctious overtones, there are aspects of the Slingshot that are surprisingly tame. Though the exhaust note gets boomy when the engine is under load, it's oddly quiet at idle while coasting to a stop; for the first time in memory, I heard seagulls squawking overhead while crawling along Interstate 405. Hit 60 mph, and the engine is turning at a leisurely 2,250 rpm.

Adding to the disjointed personality is a rather slow steering ratio – presumably to minimize the risk of oversteer and/or rollover incidents. But the sluggish, hydraulically assisted steering barely impedes the fun factor because of the tremendous grip provided by the two front tires. Once they've dug into tarmac, it takes quite a bit of cornering to unseat them, at which point the electronics cut the power and individually apply brakes at the front to help correct the course. When you're elbows deep into tackling big sweepers, understeer and oversteer dynamics become somewhat of a moot point as the Slingshot's considerable mechanical grip means you'd need to be going warp speed to unsettle the tires. Breaking the tires free is still feasible – and addictive – especially when sudden throttle inputs beckon on tighter turns – but real-world traffic, visibility and primal fear factors have a way of naturally reducing your exposure to harm. Despite the mild aspects of its powertrain and chassis tuning, this machine exudes an undercurrent of peril; you don't need an actuarial table to envision the million and one ways things can go wrong without the safety equipment that weighs down conventional passenger cars. 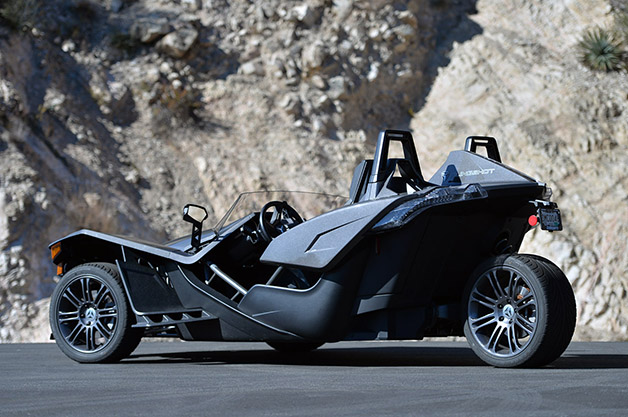 
The Slingshot's appeal lies in its connectedness to the outside environment and – let's face it – its inherent sense of danger.

When all is said and driven, the Slingshot's appeal lies in its connectedness to the outside environment and – let's face it – its inherent sense of danger. Though it's got three-point seatbelts, this is most certainly not a car, and it's also not a motorcycle by any stretch of the imagination. There are take-no-prisoners styling details, but there are also neat touches like locking storage compartments behind the driver and passenger – and yet the Slingshot still maintains a post-apocalyptic road presence, a sense of tire-squealing squirtiness, and suspension dynamics that manage to straddle the line between surprising shock absorption and tight, connected grip.

You might consider the Slingshot devilishly handsome, or you may believe it to be quite the opposite. But considering its relative affordability to more seriously focused pavement pounders like the Ariel Atom, KTM X-Bow, and Campagna T-Rex, the Polaris Slingshot's outrageous grins-per-buck ratio and unfiltered immediacy makes it anything but ugly.