Want to get your hands on a Ferrari 458 Speciale? You're in good company, because demand for what could be the last naturally aspirated V8 supercar from Maranello is apparently soaring. As a result, some buyers who've already placed their orders are reportedly being "advised" to add on extra options or risk losing their place on the waiting list to someone who will.

The news comes from UK-based Magnitude Finance, whose director Tim Marlow said, "One client ordered the car many months ago but he was subsequently advised to increase the options he selected to guarantee delivery simply because others are prepared to go pay over the odds to get one new." Another Magnitude client was asked by the dealer "on five occasions to say others wanted to buy it if he changed his mind."

Reached for comment, Ferrari spokesperson Krista Florin told Autoblog: "As with any Ferrari, customization is offered as a service to make each car unique. However, there are no requirements in order to secure an order."

The options list on the 458 Speciale can add up fast. Active headlights add over $2,500 to the price, fitted luggage nearly $11k, leather interior and front lift system a solid $6k each and those NART stripes another $11k. Ordering items like the engine cover ($7.8k), rear diffuser ($9.6k) and outer sill cover ($10k) in carbon fiber can add to the $288k base price as quick as the Speciale can gather pace. That's how our recent tester ended up topping $336k – and that's if we could actually get one.

Part of the demand is surely coming from moneyed enthusiasts keen to take possession of one of the finest mid-engined supercars Ferrari has ever made, but the demand and values are surely being driven up as well by speculators. "Everyone we speak to sees this as the next appreciating model over the long-term like the 360 Challenge Stradale and 430 Scuderia 16M before it," added Marlow, "so demand is really high."

We can only imagine that demand has been even higher for the convertible version, as Ferrari will only make 499 examples of the 458 Speciale A, putting the roadster in an even more rarified class.
Show full PR text
Ferrari 458 Speciale demand

Earmarked as a potential collector's item, some prospective buyers have been told a £20,000 deposit would only put them on a list of 'possible clients' but not guarantee an order.

With production of the V8 458 expected to end in March, others have been informed they are unlikely to receive one now unless they choose a very high number of optional extras that would push other customers off the waiting list.

Director of Magnitude Finance, Tim Marlow, said: "One client ordered the car many months ago but he was subsequently advised to increase the options he selected to guarantee delivery simply because others are prepared to go pay over the odds to get one new.

"We have another client who has successfully secured the car using our finance and he said between placing his deposit and the balance, the agent he bought it from contacted him on five occasions to say others wanted to buy it if he changed his mind."

Magnitude Finance says demand is so high because it is the last naturally aspirated V8 458 to be made, contributing to it being seen as a future classic.

Being the first owner is the appeal among Magnitude Finance's high net worth clientele.

"With approximately 200 coming to the UK, it is seen as being a potential collector's item," adds Mr Marlow.

"Everyone we speak to sees this as the next appreciating model over the long-term like the 360 Challenge Stradale and 430 Scuderia 16M before it so demand is really high.

"To ensure it is as sought after as possible and command the highest price in years to come should they decide to sell, they want to be the first and only name on the logbook." 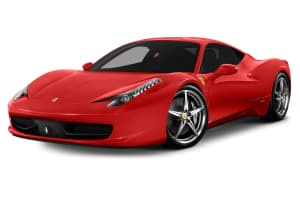