Could Airbus and Boeing collaborate on a fighter? 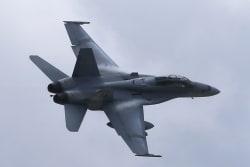 Which phrase do you prefer? Many hands make light work or too many cooks in the kitchen? It's a question that some members of NATO might be asking after the statements made by Domingo Ureña Raso, the executive vice president of military aircraft for European aerospace giant Airbus.

During the NATO Industry Forum, Raso was discussing the need for cooperation between companies from different countries when he was asked about the potential for a partnership between Airbus and its two big American rivals, Lockheed Martin and Boeing, Defense News reports. His response was somewhat surprising.

" Why not? Why not? Industry knows how to cooperate internationally," Raso said. "It's not a threat for us. We can work trans-Atlantic, we can work national...there is not a program that is made only by one company as far as I remember, not one single program made from one company."

According to analysts, the comments aren't as surprising as you might think, considering the state of Europe's fighter production. The Dassault Rafale and Eurofighter Typhoon (above) account for five of Europe's six fighter aircraft production lines (the sixth is operated by Saab for JAS 39 Grippen production) and are expected to end production by 2020. That leaves a lot of capacity.

"The development cycle for a next-gen combat aircraft is about 20 years, give or take," Douglas Barrie, of the International Institute for Strategic Studies told Defense News. "If you're remotely interested in staying in that business, then you've got to be thinking in the next few years about how to move ahead. And I'm sure to some extent that's what spurred that Airbus comment. It must be something senior management on that side are looking at."

Speaking to an analyst at the Teal Group, DN reports that Lockheed seems an unlikely partner for Airbus, due to the still extremely young F-35 program. Boeing, though, finds itself in a similar boat. Its premier fighter, the F/A-18 Super Hornet (inset), is roughly analogous with the Typhoon, which Airbus has a big part in, and is also nearing the end of its production life. That doesn't mean there won't be challenges, though.

"On one side, you have very weak prospects for European funding and extreme unlikeliness of an industrial alliance between two longtime mortal enemies," Teal Group's Richard Aboulafia said. "On the other side of the equation, they have an awful lot in common, in that they have a pressing need to do something, and the idea just makes a great deal of sense if they could somehow pull it off."