Mazda will let customers put some junk in the trunk of its Mazda2 with the introduction of a new four-door model at the upcoming Thailand International Motor Expo on November 28. While the show is still days away from beginning, the Japanese automaker is already spilling some of the details about the sedan variant of its fetching subcompact.

The four-door and traditional hatchback versions of the Mazda2 will both hit Thailand in early 2015. The two of them are essentially identical other than the added trunk and adjusted rear styling for the sedan. It basically makes the model look like a shrunken down version of the Mazda3 sedan, which isn't a bad thing at all. The company has big expectations for the little car because they're already Mazda's bestselling passenger models in Thailand.

Both models will be sold with the SkyActiv-D 1.5 diesel in Thailand, which gives them lower taxes under the government's low-emission, compact car incentive plan. According to a previous rumor, a gasoline-fueled mill could join the lineup eventually, too.

There's also gossip that the Mazda2 sedan could eventually be sold in Australia and Europe, but US sales are still a mystery. When asked about the four-door here, Mazda spokesperson Eric Booth told Autoblog, "We'll have more to say on Mazda2 at a later date. Right now, our focus is on the launches of the all-new CX-3 and MX-5 as well as the refreshed CX-5 and Mazda6." The company is showing all of those models at this week's Los Angeles Auto Show.
Show full PR text
Mazda to Debut the All-new Mazda2 Sedan at Thailand International Motor Expo

- Goes on sale in Thailand alongside the hatchback model early 2015 -

HIROSHIMA, Japan-Mazda Motor Corporation will debut the sedan model of the all-new Mazda2 (known as Mazda Demio in Japan) at the Thailand International Motor Expo 2014*1 on November 28, 2014. The all-new Mazda2 compact sedan features handsome proportions and bold styling, a high-quality, sporty interior and a combination of excellent driving performance and outstanding environmental and safety performance. The all-new Mazda2 hatchback will also be exhibited at the expo; the first time the model has been displayed to the public in Thailand. Both the sedan and the hatchback feature the SKYACTIV-D 1.5, Mazda's newly-developed small-displacement clean diesel engine. The all-new Mazda2 goes on sale in Thailand in early 2015.

The all-new Mazda2 is the fourth in Mazda's line-up of new-generation vehicles adopting the full range of SKYACTIV technologies and the KODO-Soul of Motion design theme. All the new technologies and ideas that Mazda has cultivated throughout the development of its new-generation vehicles since the CX-5 have been packed into the model's compact body. With features such as the Mazda Connect advanced car connectivity system,*2 the all-new Mazda2 offers functionality and value exceeding the standards of the segment. The model has received high acclaim, including being awarded 2014-2015 Car of the Year Japan in October, 2014.

The Mazda2 is Mazda's best-selling passenger model in Thailand with approximately 120,000 units sold since the model went on sale in the country in January 2010. The all-new Mazda2 has been approved for the second phase of Thailand's Eco-Car program, and with the local launch of the new model Mazda aims to further strengthen its business in the country.

Models on display at the Thailand International Motor Expo 2014

*1 Press day is November 28. Open to the public from November 30 through December 10. Mazda will hold its press conference on November 28 from 15:40-15:50 local time.
*2 The name Mazda Connect is used in Japan, USA, Canada and Mexico. The system is referred to as MZD Connect in other markets.
*3 The Thai government's tax incentive program for fuel-efficient, low-emission compact cars (with engine displacements of 1.3 liters or less for gasoline, and 1.5 liters or less for diesel). Requirements for the program include meeting Euro 5 emission standards, fuel economy of 4.3 liters per 100km or better, and CO2 emissions of 100g per km or less. Models approved for the program receive preferential taxation in terms of new model excise tax, etc. 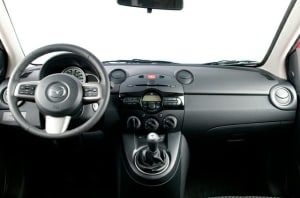