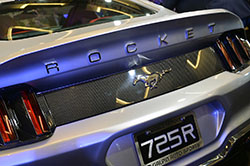 Galpin Auto Sport and Henrik Fisker made big promises about the Rocket before its debut at the Los Angeles Auto Show today, calling it the "ultimate American muscle car." Now that this 725-horsepower carbon-fiber Ford Mustang has officially been revealed, we've now got a chance to see if their vision backs up all the bluster.

The Rocket is based off the latest 2015 Mustang, but the entire exterior design has been substantially reworked by Fisker. "This is a project born out of passion, it's a dream come true, to have the opportunity to 'touch' a Mustang and apply my design ideas to it," he says in the model's announcement.

The biggest changes come up front, where Fisker has added a gaping hexagonal grille with a polished bar running and two nearly hidden driving lights at the top corners. Long nostrils run down each side of the hood, taking their inspiration from the 1968 Shelby GT500. The Rocket's design also emphasizes its scalloped sides, which run back to functional ducts at the rear to cool the Brembo Grand Turismo brakes. When checking out the Rocket from the rear, it's easy to spot the wider fenders that are beautifully blended into the integrated spoiler. The interior has been left mostly alone beyond some eye-grabbing red leather and carbon-fiber trim.

Under the hood, Galpin spokesperson Nathan Hoyt has confirmed to Autoblog that the Rocket employs a 5.0-liter V8 with a Whipple supercharger which can be called to attention with a six-speed manual gearbox.

It took only a few months for the vehicle to go from conception to reality. Fisker showed Galpin President Beau Boeckmann early sketches at this year's Pebble Beach Concours d'Elegance, and the two parties went from there. "When Henrik showed me his ideas, I got chills - it's literally the most beautiful Mustang I have ever seen," says Boeckmann in the company's release.

Production is set to begin in December, with deliveries starting in early 2015. There's no set production total in mind for now, but Hoyt tells Autoblog that the price will be "just over $100,000." Scroll down to read all of the details about Fisker and Galpin's Rocket.

The Rocket's design is unmistakably inspired by specialty pony cars of the 1960's and early 1970's including the 1968 Shelby GT500. Anchored by an imposing hexagonal carbon fiber grill-which is split by a polished aluminum bar and wild horse running across the horizon reminiscent of the '60's Mustangs- the Rocket's lines emanate from the front, through the long hood, over a set of sculptured flared fenders and converge on its integrated rear spoiler, belying the car's extreme power and refined athleticism.

"Mustang has been my favorite car for almost my entire life," said Boeckmann. "I had the pleasure of working with Ford's development team for the last few years, and I think they absolutely nailed it. So of course, I wanted to do something really special when the new Mustang came out. When Henrik showed me his ideas, I got chills-it's literally the most beautiful Mustang I have ever seen. Considering it's our top product for customizing and performance at GAS, it is a natural fit for us to try to make the performance stand out as much as the design does. Doing this project with my dear friend Henrik-who I consider one of the greatest designers of all time-is simply a dream come true!"

The handmade carbon-fiber bodywork-constructed by renowned concept car builder, GFMI Metalcrafters Inc., of Fountain Valley, Calif., headed by CEO Mike Alexander-features a number of scoops and vents that direct airflow where it is needed most. A front splitter helps draw out hot air from underneath the car and improve engine cooling, while simultaneously working in conjunction with the rear spoiler, enlarged rear diffuser and polished carbon fiber aero skirts to provide needed high-speed downforce.

"It's a special moment when you get to work on a car like the Ford Mustang. This is a project born out of passion, it's a dream come true, to have the opportunity to "touch" a Mustang and apply my design ideas to it," said Fisker. I love the 60's American muscle cars. They are more sculptured, with more radical proportions and bold details than European counterparts. My favorite Mustang is the 1968 Shelby GT500 that had this long hood and huge air intakes; it gave me butterflies the first time I saw it. We wanted to recreate that feeling with this car."
     
The Rocket is painted with a custom mixed silver called Éminence Grise and rides on large 21-inch ADV.1 wheels with Pirelli P-Zero extreme performance tires that are supported by a front and rear independent, fully-adjustable suspension; allowing owners the capability to set their car up to their own preference, or specially "tune" the Rocket for optimal street or track duty.

"Ford's engineers and Moray Callum's design team did an amazing job with the new Mustang," said Henrik Fisker. "So good in fact, I think the design additions and power upgrades we have made to the car help it play in a higher league, against much more expensive supercars!"

Henrik Fisker and Galpin's partnership though unlikely at first glance, has been a longtime coming. Galpin itself has a 60 year history of customizing and coach-building specialty cars. In addition to being home to the top volume Ford dealer in the world, Galpin also owns one of the top performing Aston Martin stores in the United States. Fisker too has a history of specialty coach building and designing, making a name for himself as the designer of the BMW Z8, the coach-built Fisker Tramonto and Latigo CS, the Aston Martin DB9 and the V8 Vantage, and even his own luxury plug-in hybrid sedan, the Fisker Karma. It was with Aston Martin that Henrik Fisker and Beau Boeckmann at Galpin first crossed paths. From 2001 to 2005 Henrik Fisker served as board member for Aston Martin and as the brand's Design Director, when it was then owned by Ford. The two continued to travel in the same circles-even after Fisker's tenure at Aston- and the rest as they say, is history.

Fast forward to August of 2014, when Henrik Fisker approached Boeckmann with some advanced design sketches for a concept of what would later become Rocket just after the Pebble Beach Concours d'Elegance. The two men discussed a potential joint venture to build the car and, in short order, came to an agreement to move forward with construction.

Make no mistake however, this is not a one-off concept. The car that debuted on the LA Auto Show stand is the first example of a low-volume series. Production of the Rocket begins in December with the first deliveries beginning in early 2015. Interested buyers will have the option of purchasing a car through Galpin Ford directly or through one of several hand-picked dealers across the country and around the world.

Galpin Motors, home to the world's largest volume Ford dealership for the 24th consecutive year, was founded in 1946 and is headquartered in Los Angeles' San Fernando Valley. Galpin is comprised of a family of quality automobile brands that include Ford, Lincoln, Honda, Mazda, Subaru, Volkswagen, Volvo, Jaguar, Lotus and Aston Martin. For additional information on Galpin Motors and Galpin Auto Sports, contact Marketing Manager Jeff Skobin at 818-778-2540/jeff@galpin.com, visit the dealer at 15505 Roscoe Blvd., North Hills, Calif. 91343, like on Facebook at Facebook.com/GalpinMotors or visit www.galpin.com.

Henrik Fisker is an entrepreneur and one of the world's leading automotive designers. Previously Fisker founded Fisker Automotive in 2007, where he launched the world's first premium plug-in hybrid, the Fisker Karma. Best known among his creations are BMW Z8, Aston Martin DB9 and Aston Martin V8 Vantage. Amongst his latest creations is also the Lauge Jensen Viking motorcycle. Originally from Denmark Fisker is now based in Los Angeles, and is the Founder of HF Design, a design and technology company with various automotive, technology and consumer product ventures underway.