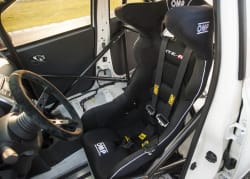 Nissan is seriously emphasizing its commitment to motorsports with projects like next year's GT-R LM endurance racer at Le Mans and the company's participation with GT Academy. At least in Canada, the automaker is adding another opportunity to get people onto the track with the new Nissan Micra Cup one-make race series. Sure, the Micra might not as quick as a GT-R, but this series offers Canadians a chance to start racing for a reasonable price. Nissan claims the events have "the lowest running cost of any Canadian series," and we can't think of a cheaper turnkey new racecar in all of North America.

The cars are all based on the not-for-US Micra 1.6 S M/T model with a 1.6-litre four-cylinder engine making 109 horsepower and 107 pound-feet of torque and a five-speed manual gearbox. The only real performance upgrades are a Nismo suspension kit, new exhaust, improved brake pads and sticky Pirelli tires. For added safety, the interior is entirely stripped out and is replaced with a full roll cage with a driver protection net, FIA-approved racing seat with five-point harness, fire extinguisher and front and rear tow hooks. The whole, race-ready package will set competitors back $19,998 Canadian dollars before taxes.

The inaugural Micra Cup series begins in May 2015, and the first season is exclusively taking place in Quebec, with the promise of moving to other provinces if it's a success. Each event includes a half hour of practice, a half hour of qualifying and a pair of half-hour races. Nissan is estimating impressive fields of over 25 cars of competitors.

Drivers obviously shouldn't expect to set any track records in these little hatches, but they do look like a ton of fun to pitch around a circuit. Scroll down to see the Micra in action and read the full release.

Sanctioned by Auto Sport Québec (ASQ) and presented by JD Motorsport Organization with the support of Nissan Canada, the Nissan Micra Cup exclusively features the stock Micra 1.6 S M/T model with minor modifications, including NISMO suspension - to render it race-ready.

"The Nissan Micra Cup offers competitors the one of-a-kind opportunity to push the limits and hit speeds they never thought they could behind the wheel of Canada's most attainable vehicle, the Nissan Micra," says Christian Meunier, president of Nissan Canada Inc. "Nissan's heritage is intrinsically connected to motorsports and dates back to the 1930's. Therefore, we are proud to return to our roots in such a unique way, and in Canada! Through this collaboration with JD Motorsport Organization we have developed a highly accessible and extremely fun series for the Canadian motorsport enthusiast who has a dream to compete."

The Nissan Micra Cup's inaugural season will take place in Canada's motorsport fan hub, the province of Québec, over the course of five weekends starting in May 2015. The Nissan Micra Cup will offers drivers the opportunity to race on some of the most well-known race tracks in Quebec, with the potential to expand to other provinces in 2016 and beyond.

Unlike most motorsport events, each competing Nissan Micra race vehicle will have the exact same specifications, resulting in a competition that truly reveals the most skilled drivers. The Nissan Micra Cup race vehicles remain equipped with the Nissan Micra's stock 1.6-litre DOHC 4-cylinder engine with dual fuel injection and Twin CVTC (Continuously Variable Timing Control) and stock 5-speed manual transmission. More than 25 Nissan Micras will compete on each race weekend which will include two hours of track time consisting of: a 30-minute trial, a 30-minute qualifying session and two 30-minute races.

"When I drove the 2015 Nissan Micra for the first time, the one thing that stood out above everything else is how fun this car is to drive. It's exceptionally nimble, agile and responsive," says Jacques Deshaies, founder of JD Motorsports. "At that point in time, I was already well in the planning stages of developing a motorsport series that would offer low running costs for the enthusiast Canadian. After my first test-drive in the Micra, with my heart racing from this seemingly inconspicuous, subcompact car, I knew without a doubt this was the optimum vehicle for the motorsport series."

The road to the starting line
As part of its development, the Micra Cup race car has been through an intensive testing process handled by a team of motorsport specialists including Jean-François Dumoulin, the well-known professional racer from Québec. The Nissan Micra racing version is a legitimate race vehicle, complete with the following modifications to deliver the upmost in performance, reliability and safety:

Nissan is proud to offer the most affordable new car in Canada and the most affordable new race vehicle in Canada. The race-ready version of the Nissan Micra will be available by special order to JD Motorsports for the final price of $19,998*, which includes the installation of all the required safety features, new wheels and tires, NISMO S-Tune suspension and modified exhaust.

"I really enjoyed every minute I spent testing the Nissan Micra at Autodrome Saint-Eustache and Circuit Mont-Tremblant. For a car which is still almost stock, the Nissan Micra, is quite fast and so much fun to drive," says Jean-François Dumoulin. "After pushing it to the edge of its limits on these tracks without any issues, I can attest to the fact the racing version of the Nissan Micra is a formidable and predictable car. It's going to be very interesting to see the competitors going head-to-head on the tracks in the Nissan Micra Cup - may the best driver win!"

A car and motorsport series for the masses
The vehicles used in the Nissan Micra Cup are a brilliant blend of the proven, high-quality stock parts from Nissan, and some high-performance features to ensure the Nissan Micras are ready for legitimate track races. JD Motorsport Organization, in collaboration with Nissan and NISMO, worked extensively with a team of professionals at Motorsports in Action (MIA) to develop this special racing version of the Nissan Micra, which is constructed on the stock Nissan Micra S (base) model

Young karting drivers, the average Canadian looking for an entry point into motorsport competition, or anyone who wants to experience the rush of adrenaline inherent with racing cars are all well-suited to this series. In summary, the Nissan Micra Cup is for people who are passionate about motorsports, want to experience all the fun and thrills of racing, but without spending staggering amounts of money.

To learn more about the Nissan Micra Cup, and place your order through JD Motorsports, visit: ww.nissan.ca/micracup