Over the past three years, the number of speed camera programs has grown from 115 to 140.

Christie indicated last month a five-year statewide pilot program wouldn't be renewed when it expires in December. "I'll wait until all the evidence comes in ... but I will tell you that my gut feel on this one is that I don't favor it," he told The Asbury Park Press.

He's not alone. Red-light cameras are falling out of favor with communities and motorists across the country. After two decades of continuous growth, the number of red-light camera programs is declining in the United States. The number peaked at 540 two years ago, according to records kept by the Insurance Institute for Highway Safety. Today, there are 502 programs, a decrease of about seven percent.

"There's a bit of a disconnect there, in seeing one go up and the other go down," says John Bowman, communications director of the National Motorists Association, which also tracks the number of automated programs. "I would hope some of the backlash with red-light cameras would start to carry through to speed cameras, but we haven't seen that yet."

The reasons behind the decline of one type of automated enforcement system while the other continues a steady uptick aren't clear. In some cases, changes in state laws affect local programs; in others, the fiscal health of municipalities affects automated enforcement contracts. And sometimes the controversial nature of the traffic cameras plays a lead role in discontinuing their use. 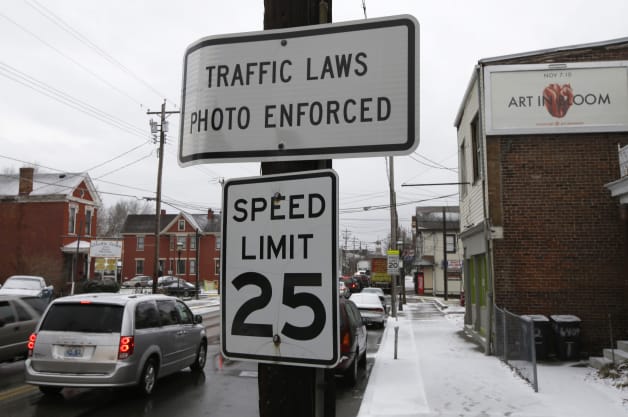 An Avalanche Of Problems

Next month, voters in Maple Heights, OH, will vote on whether to terminate the town's fledgling traffic-camera program. Launched only in July, the cameras have already accounted for nearly $400,000 in revenue for a cash-strapped town. The Ohio Supreme Court had to compel the town to include the issue on the Nov. 4 ballot. If history is any indication, the cameras won't be popular with voters.

In 27 of the 30 instances in which automated traffic enforcement ballot initiatives have been voted upon over the past 23 years, voters have rejected traffic cameras. In votes involving red-light cameras only, voters rejected them 10 of 11 times, according to National Motorists Association records.

Recently, high-profile problems with these systems have only worsened.

An ongoing investigation into Chicago's red-light camera program revealed unexplained spikes in the number of violations recorded at certain locations. Thousands of motorists received tickets they did not deserve, according to the Chicago Tribune.


"I would hope some of the backlash with red-light cameras would start to carry through to speed cameras."
– John Bowman

In August, the former CEO of RedFlex Traffic Systems was indicted on corruption charges in Chicago. Prosecutors allege that Karen Finley bribed a city transportation official to win more than $100 million worth of contracts.

In New Jersey, a judge dismissed approximately 17,000 red-light camera citations because a glitch in the system prevented unsuspecting motorists from receiving their tickets.

A recent Inspector General's report that examined Washington DC traffic enforcement found aspects of its automated programs troubling. The report found that an earlier study "intended to instill public trust that speed cameras are installed by the DC government to improve safety and not just increase local revenues" had the opposite effect when it concluded that 300 of 300 possible locations for automated enforcement equipment were justified.

The report found an abundance of problems in DC Automated enforcement cameras issued violations in cases when they did not have enough information to conclusively identify vehicles, when camera information did not match license-plate registration information and when photographic evidence was not available to motorists.

In the Capitol and elsewhere, the burden of proof often lies with ticketed motorists, who are increasingly frustrated in their inability to fight back.

More than a few critics believe that red-light cameras are outright money grabs designed to generate revenue, not enhance traffic safety. The decrease, they say, is coming because motorists are fed up with these violations and are finally fighting back.

"It's all about the revenue," says Declan O'Scanlon, a New Jersey assemblyman who has introduced legislation that would thwart the use of automated enforcement cameras and encouraged Christie to not renew the pilot program. "The more people know about these ATMs – automatic taxing machines – the more they realize that they are nothing more than government-sanctioned theft."

Even when deployed properly, there are lingering questions over whether red-light cameras actually enhance traffic safety. Numerous studies of various scope and method have attempted to determine their effect and delivered mixed results. One that both supporters and critics cite is a 2005 study sponsored by the Federal Highway Administration.

Researchers in that study analyzed cameras stationed at 132 locations in seven US cities. They found both sides had some merit: red-light cameras in the selected cities reduced right-angle crashes by 25 percent, but they also found a 15-percent increase in rear-end collisions, the latter of which is potentially caused by motorists who hit their brakes when they realize they're entering an automated enforcement zone.


"You seem to see that red-light cameras do have more and stronger opposition."
– Anne McCartt

The authors found a net economic benefit for the system – that is, the costs saved by preventing more-serious, right-angle crashes are more substantial than costs incurred from the increase in rear-end crashes. But they also noted a need for a second, more definitive study of the issue.

The economic aspects of red-light cameras aren't only found in accident reduction. A 2011 report ( PDF here) from the U.S. PIRG Education Fund on red-light cameras warned that contracts between public municipalities and private camera vendors often put profit above traffic safety, because many of these contracts call for the vendors receive 30 to 40 percent of the revenue raised by tickets. When traffic enforcement is privatized, these contracts often limit the government's discretion to set and enforce traffic regulations, further putting the public at risk, the report said.

The report noted some red-light camera vendors have organized under the auspices of grassroots organizations, such as the National Coalition for Safer Roads, which produced the video below. U.S. PIRG criticizes the group for presenting only the upside of automated enforcement without discussing other alternatives.

Anne McCartt, senior vice president for research at IIHS, says the organization's studies show red-light cameras enhance traffic safety. Accidents that occur as a result of red-light running claim approximately 676 lives per year, according to the FHA, so reducing those accidents by a quarter could substantially save lives.

In some cases, she says, red-light cameras have been removed because they've done their job. "It can do with cameras that are no longer needed because they're been successful in reducing violations," she said. Yet she concedes there is growing public opposition to the red-light cameras, something she finds befuddling because in IIHS surveys, motorists regard red-light running as a more serious traffic violation than speeding.

But speed limits are simpler to understand, and typically well marked. Red-light violations can have more complexity. Motorists often have less control over the timing of yellow lights, and motorists may not regard rolling through a right turn at a red light as an offense on par with a straight-line path through a red.

"They both can be controversial, but you seem to see that red-light cameras do have more and stronger opposition," she said.