Male Baby Boomers most likely to drive connected cars, according to Nielsen study 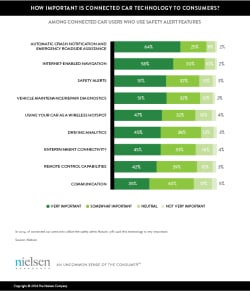 There's no denying that new cars are becoming increasingly packed with tech that connects drivers to the internet, even if it can be distracting. Whether it's as simple as streaming audio or turning the interior into a wifi hotspot, these connected car systems appear here to stay. So who actually uses this stuff? The survey-meisters at Nielsen have issued the results of a new study that sheds light on the subject, and some of the results aren't what you might expect.

The analysis is based on surveys from 5,985 people who consider themselves "extremely, very, or somewhat interested" in things like connected homes, automotive technology and wearable tech.

You might presume young whippersnappers to be the ones most likely to drive vehicles with this cutting-edge telematics technology, but as it turns out, it's the opposite. Of those with who own a vehicle with connected features, 42 percent of them are 55 or older. They're also 58 percent men, well educated and 37 percent make over $100,000 a year. The most important parts of the tech to them (full data at right) are crash notifications, Internet-enabled navigation, safety alerts and vehicle diagnostics.

Of course, this might simply be a case of youthful drivers not being able to afford the latest and greatest technology. Of the people considering buying a new car in the next two years, 39 percent of them want it to be a model with such built-in connectivity features. However, their reasons appear somewhat frivolous with 60 percent of them just wanting to experience the systems, 58 percent wanting to entertain passengers and 43 percent believing the systems might boost productivity.

Nielsen's study suggests that automakers need to make sure their tech is usable by the entire swath of the population, especially for the older drivers who are most likely to actually have the systems in their vehicles. Scroll down the read the study's full results.
Show full PR text
THE CAR IS THE INFORMATION SUPERHIGHWAY

CONSUMER | 10-08-2014
Cars are big business, and as technology continues to permeate our lives, the auto industry is broadening its revenue base by tapping into consumers' desire to stay connected from behind the wheel. The industry is also amplifying an array of connected car options across a swath of TV ads. And when you consider how personal a car purchase is, new connectivity features are helping automakers personalize content for everyone, from working moms in need of hands-free talk to twenty-something singles looking to score reservations at the local hotspot.

Regardless of tech preference, however, the modern car offers some form of connectivity for everyone-and that appeal is growing.In fact, of the 44% of future auto intenders who plan to purchase a new car within the next two years, 39% are very likely to purchase a connected car with built-in features. So what's the draw? In most cases, it comes down to having what's cool: 60% of future auto intenders say they'd like a connected car because they want to experience emerging technologies, 58% feel it will provide entertainment to passengers while on the road, and 43% say it will boost their productivity while they're on the road.

The rise in connectivity options-whether for getting directions or checking engine diagnostics-also presents a unique opportunity for advertisers and marketers to reach consumers in the comfort of their own cockpits.

So who is the connected car user?

The study found the majority are men (58%), 42% are age 55+ and 62% have at least a college degree and 37% made more than $100,000 per year. More still, is the added convenience that connected cars can afford to drivers who spent ample time in their vehicles. In fact, 37% of connected car users say they spend 30 minutes to an hour in their cars on a regular basis.

While money can't always buy complete protection, connected cars can do a lot to bridge the gap. Safety is a predominant value among consumers and, as Nielsen's study found, it's among the highest-ranking features incentivizing them to buy a connected car. Among future intenders, 79% said they believe a vehicle's safety features will make them feel safe. Users of connected car technologies also value crash notifications (64% very important), Internet-enabled navigation (58% very important) and safety alerts (51% very important). Connected car consumers also rated these same features as most important in their car-buying decision-making processes

But connectivity isn't just about safety. It can be fun and informative too. In fact, according to Nielsen's latest Music 360 report, nearly one-fourth of all music listening each week happens behind the wheel. Forty-six percent of connected car users use driving analytics, and 41% use wireless hotspots every time they're on the road. They also connect for entertainment about one-third of the time. In Q2 2014:

The insights from Nielsen's Connected Life Report were gathered from a general population sample 18+ years old and consist of 5,985 respondents who either use or are extremely, very, or somewhat interested in at least one of the three connected life technologies-connected home, car and/or wearable technology. Respondents completed an online, self-administered survey in late May and early June 2014.