Turbochargers set to double in US over next 5 years 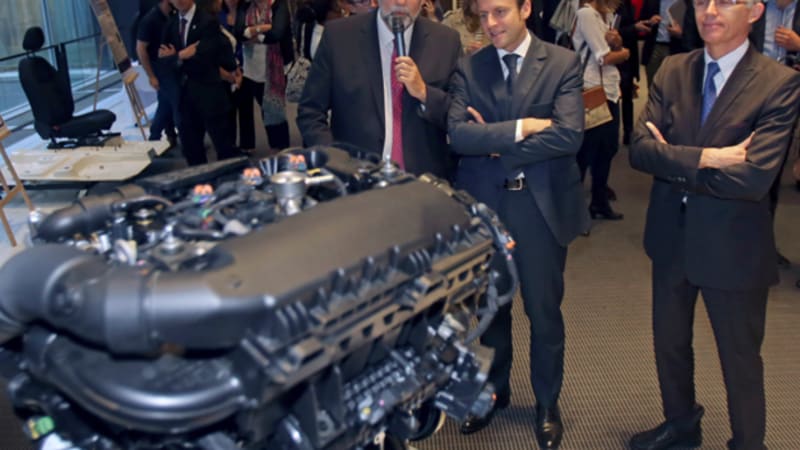 As the public portion of the Paris Motor Show gets under way this week, attendees will no doubt see dozens of vehicles with turbocharged engines. In Europe, such technology is common. Two out of every three cars on the road have turbochargers under their hoods.

That's not the case in the United States, where turbochargers have traditionally been a fringe technology. But that's changing, faster than many experts anticipated.

North America is the second-fastest-growing market for turbochargers, and the market is expected to grow by double digits in each of the next five years, according to a forecast released by global supplier Honeywell. By 2019, the company expects turbochargers to be on 38 percent of new vehicles in North America.

Once found only on larger, heavier sedans and high-performance vehicles, automakers are implementing the technology on a wide array of vehicles as they seek fuel-efficiency gains in response to federal mandates. Today, they can be found on vehicles as big as the BMW 7 Series and Ram 1500 truck and as small as the Chevy Sonic and Fiat 500.

"We've been talking about this expected trend for a number of years, and now it's happening," says Peter Hill, senior marketing director at Honeywell Turbo. "It's real, and it's playing out. We're seeing more and more automakers planning turbocharged powertrains."

"Because they are compatible with virtually all engine technologies, they represent a global growth opportunity." - Philip Gott.

In the US, where turbos are aboard approximately 20 percent of new cars now, there are two key factors driving the trends. The federal government has mandated stricter fuel economy standards for light-duty vehicles, culminating with a 54.5-miles-per-gallon fleet-wide requirement by 2025. Consumers themselves are demanding more fuel-efficient cars. Since the recession they regularly cite fuel economy and out-of-pocket expenses as high priorities while car shopping, Hill said.

Innovation with hybrid, electric and even hydrogen cars has been one way automakers have started to meet those challenges. But improving upon the long-standing internal-combustion engine is also a prime strategy, and turbochargers can reap 20 to 40 percent gains in fuel economy in downsized engines while maintaining performance in both gas and diesel models.

Turbocharging can be expensive, adding $1,000 to $2,000 to the cost of a vehicle. But consumers may find that preferable to paying double those costs for a car with a hybrid powertrain, says Hill. He and Honeywell certainly have some skin in what's projected to be a $12 billion annual market by 2019, but other analysts agree.

"During the past decade, turbochargers have moved from a niche technology in the high-performance market segment to an integral part of manufacturers' mainstream emissions control and fuel economy strategies," said Philip Gott, senior director for long-range planning at IHS Automotive. "Because they are compatible with virtually all engine technologies, they represent a global growth opportunity, making substantial gains even in the limited-growth markets of the US, Japan and Europe."

Like the auto industry overall, the biggest growth projections are in China. Honeywell forecasts that turbo penetration will go from 23 percent this year to 41 percent of the country's fleet by 2019, accounting for more than 13 million vehicles each year.

Of course, Europe, where turbo technology first flourished on diesels, remains the largest market for turbocharged vehicles, and executives and government officials like the ones viewing the EB Turbo Pure-Tech pictured above, have used them for years to achieve fuel savings amid high prices. Honeywell forecasts modest 2 percent growth from 67 percent of the market to 69 percent over the next five years, accounting for 16 million in annual vehicle sales.


"We've been talking about this expected trend for a number of years, and now it's happening." - Peter Hill.

"They're not reversing the trend in any way," Hill said. "There's a broader question hanging over Europe of whether diesels will remain the majority choice, and that remains to be seen. We're expecting diesels to slip back a notch or two, but we'll make it up on the gas side."

While diesel powertrains face stiffer competition from gasoline-consuming powertrains in Europe, their recent growth in the US is poised to accelerate. Honeywell projects that diesels will grow from three percent of the US market to seven percent over the next five years.

Improvements are needed in infrastructure to support diesel growth, and state-by-state differences in taxation make it an uneven prospect, but Hill said there have been early successes with the Ram 1500 and Chevrolet Cruze.

"That's success in the market, and people are listening to that," he said. "That's a great way to have a very fuel efficient and high-torque solution. This is a very straightforward way to improve mpgs."
X