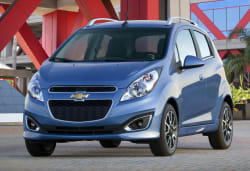 Just hours after confirming to Autoblog its intention to recall 97,540 vehicles in the US (117,651 in North America) for a possible manufacturing defect in the chassis control module of several models, General Motors is issuing two more campaigns that affect another 379,401 units in the US (524,384 in North America).

One campaign covers 290,107 US examples of the 2010-2015 Cadillac SRX and the 2011-2012 Saab 9-4X because the "rear toe link adjuster lock nuts" may be improperly torqued. If not up to spec, the toe adjuster link could separate and allow the wheel to shift while driving, making the handling unstable. GM says that it knows of three crashes and two injuries as a result of this problem. Dealers are inspecting the nuts and installing a new link assembly, if necessary. Autoblog first reported about this potential issue when it showed up on a list of recalls from Transport Canada.

The second recall is for 89,294 examples of the 2013-2015 Chevrolet Spark in the US manufactured from January 17, 2012, through July 29, 2014. According to GM, "corrosion can cause the secondary hood latch striker to stick in the open position." If this happens, and the primary latch also isn't engaged for some reason, the hood could fly open while driving. About 13,000 of these affected Sparks are at dealers and are being held until repaired. The fix requires replacing the hood striker. GM isn't aware of crashes, injuries or fatalities caused by this problem.

Scroll down for GM's official statement on the recalls, and the report from NHTSA about the Spark campaign.
Show full PR text
General Motors today announced two recalls covering 379,401 cars and trucks in the United States. The total number of vehicles recalled in North America -- U.S., Canada, Mexico and exports -- is 524,384.

290,107 model year 2010-2015 Cadillac SRX and 2011-2012 Saab 9-4X SUVs for torque inspection of rear toe link adjuster lock nuts. Improper torqueing could possibly result in a loose joint and worn threads that could cause the toe adjuster link to separate. Dealers will inspect for the condition and, if necessary, will remove them and install a new link assembly. Unsold vehicles are being checked for proper torqueing before being sold. A loose toe adjuster link can cause the vehicle to sway or wander at highway speed, activate the vehicle's electronic stability control system, and cause excessive wear to the threads in the link. Additionally, the rear suspension may make loud metallic noises, particularly when the vehicle is travelling over bumps or potholes. If separation occurs while the vehicle is being driven, it would create sudden vehicle instability, increasing the risk of a crash. GM is aware of three crashes and two injuries as a result of this condition. GM reported this recall to the NHTSA on September 17.

89,294 model year 2013-2015 Chevrolet Spark models in the U.S., because corrosion can cause the secondary hood latch striker to stick in the open position. If the primary latch is not engaged, the hood could open unexpectedly. These vehicles, imported from South Korea, were manufactured with a secondary hood latch that may prematurely corrode at the latch pivot, causing the striker to get stuck out of position and preventing the striker from properly engaging the hood latch. About 13,000 of these unsold vehicles are being held at U.S. dealerships and will not be delivered until repairs are made. Customers will be notified by letter about the recall and dealers will replace the hood striker when parts are available . GM is not aware of any crashes, injuries or fatalities as a result of this condition. This recall was posted today on the NHTSA website.

SUMMARY:General Motors LLC (GM) is recalling certain model year 2013-2015 Chevrolet Spark vehicles manufactured January 17, 2012, to July 29, 2014. The secondary hood latch may prematurely corrode at the latch pivot causing the striker to get stuck out of position, preventing it from properly engaging the hood latch.

CONSEQUENCE:If the secondary hood latch corrodes causing the latch to be stuck out of position, and the primary hood latch is not engaged, the hood could unexpectedly open while driving, increasing the risk of a vehicle crash.

REMEDY:GM will notify owners, and dealers will replace the striker and latch with a new part with superior corrosion protection, free of charge. The manufacturer has not yet provided a notification schedule. Owners may contact Chevrolet customer service at 1-800-222-1020. GM's number for this recall is 14456.