Chris Bruce
Aluminum is the big buzzword in the pickup world these days, especially with the upcoming 2015 Ford F-150 shedding over 700-pounds by switching to the lightweight metal. The question on pundits' and buyers' minds is when (or if) General Motors and Ram Trucks could make a similar shift. However, Chevrolet is showing that there is still room for good-ole' fashioned steel in the truck world with its Toughnology Concept.

The Toughnology concept is based on the 2015 Silverado 1500 with a 5.3-liter V8 in LTZ trim and clearly takes aim at naysayers proclaiming the end of metal's use in trucks. It uses about 67 percent ultra- and high-strength steel in its cab. According to Chevy, not only is the material around 30 percent lighter than conventional carbon steel but also offers improved strength too.

The automaker even takes an obvious shot at Ford in the concept's announcement saying that the use of high-strength steel "offers significant mass savings at a lower cost than aluminum, which helps keep down the overall vehicle cost." Clearly, it knows where the competition is.

Chevy wants to bring the Silverado's underpinnings to the fore, and it paints the Toughnology in a shade of silver that emulates the color of raw steel. If that doesn't get the message across, it even has the molecular model for the metal on the side of the body. Further styling enhancements include a black hood, mesh grille, 22-inch wheels and tinted headlight covers. For some boosted capability, the concept also has a new air intake, performance exhaust and upgraded brakes.

Like the Colorado Sport concept, this one is on display both at the State Fair of Texas and at the upcoming SEMA show. Find the full release about the truck, below.
Show full PR text
'Toughnology' Concept Shows Silverado's Built-In Strength

2014-09-25
DALLAS – High-strength steel makes the Chevrolet Silverado lighter, stronger and more efficient than the conventional carbon steel used in most vehicles. Those attributes are highlighted in the simulated raw steel appearance of the new Silverado Toughnology concept.

The concept is also a showcase for Silverado's connectivity technologies – including all-new OnStar 4G LTE with built-in Wi-Fi hotspot – as well as accessories and performance parts available through Chevrolet dealers.

"The technology of advanced high-strength steel makes the Chevrolet Silverado stronger, lighter, more capable and more efficient – and that's exactly what the Toughnology concept represents," said Jeff Luke, executive chief engineer. "During the Silverado's development, we evaluated all materials and chose those that would provide the best strength to support capability while still delivering a strong value to customers.

"High-strength steel had clear advantages and is a contributor to the overall package that made Silverado the 2014 North American Truck of the Year."

High-strength steel, which is pressed while still in molten form, can be up to 30 percent lighter than carbon steel with the same strength. It offers significant mass savings at a lower cost than aluminum, which helps keep down the overall vehicle cost. Lower weight translates to greater efficiency and capability for truck owners.

The 2015 Silverado 1500 with the EcotTec3 5.3L V-8 engine is EPA-estimated at 23 mpg on the highway and offers a maximum trailering capacity of 11,200 pounds, per newly adopted SAE J2807 Recommended Practices. With the available 6.2L V-8 engine and all-new eight-speed automatic transmission, the Silverado's trailering capacity increases to 12,000 pounds.

Lightweight strength extends to the Silverado's pickup box, where the floor is made of roll-formed steel. It's more durable than the conventional stamped steel used by other manufacturers and it's lighter than the material used for stamped parts, further reducing vehicle weight.

The Silverado also strategically uses aluminum, including the hood, which saves 17 pounds over a conventional stamped steel hood.

"We put the best materials to use where they'll do the most good," said Luke. "Every panel, inside and out, is designed to support the Silverado's capability and carry on its position as America's most dependable, longest-lasting truck."

The Toughnology concept is striking for its stripped-down appearance. The paint job mimics the look of raw, unpainted steel and is accented with steel molecule graphics. The hood – the only visible metal exterior component that isn't steel – is painted black.

Performance capability upgrades include a performance exhaust system and upgraded performance brakes. Under the hood is a performance air intake system on its 5.3L engine rated at 355 horsepower and 383 lb-ft of torque.

The available OnStar with 4G LTE and built-in Wi-Fi hotspot provides a mobile hub for drivers and passengers to stay connected. The hotspot is on whenever the vehicle is on and comes with a three-month/three-gigabyte data trial (whichever comes first). 4G LTE is the most current and fastest mobile data network – 10 times faster than 3G and 100 times faster than OnStar's previous generation hardware. 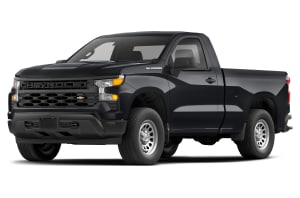 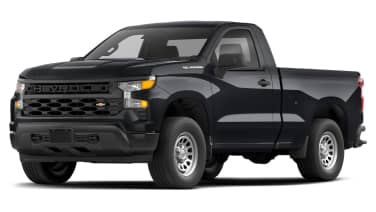 $550 - $2,842 Nat'l avg. savings off MSRP
See Local Pricing
I'm not in the market for a vehicle at this time. Please move this suggestion to the side for 30 days.
Huge Savings