After seven years of work, the National Corvette Museum Motorsports Park has opened, and it's 3.15 miles of roller-coaster blacktop.

If you're an auto enthusiast of any stripe, you know about the National Corvette Museum. We know, " Sinkhole! Sinkhole! Sinkhole!" but this story isn't about a fissure in the ground. For 20 years, NCM has been a fixture in the Bowling Green, KY area. Located directly across the street from the Corvette factory, it houses historic 'Vettes, an interesting history of the brand and people behind it, serves as a kickoff point for plant tours and hosts tons of annual club gatherings. Between the museum and factory, this place is hallowed ground for Corvette acolytes. Now, it's been made even more compelling. After seven years of work, the National Corvette Museum Motorsports Park has opened directly across the freeway, and it's 3.15 miles of roller-coaster blacktop.

The track has been a dream since 2007. The museum worked with local land owners and the city of Bowling Green to acquire 70 acres of property, then consulted with famed track designer Alan Wilson. Wilson surveyed the site and recommended that if the goal was a truly world-class course, another significant parcel of property would be needed. After a few more acquisitions, track designer Steve Crawford was hired to lay the course on a total of 184 acres. He incorporated famous corners from Circuit de la Sarthe and other courses as well as new unique, challenges for drivers. The asphalt was specified with a high-polymer content for durability, and ground was broken on July 13, 2013. Just 15 months later, the ribbon was cut during the Museum's 20th anniversary on September 16. Total investment: $20 million. 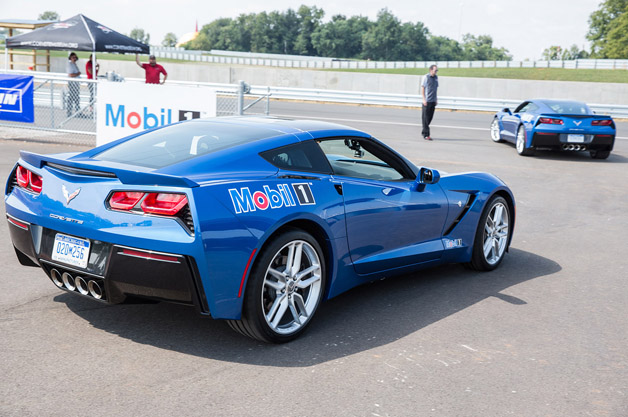 There isn't even any rubber bedded into asphalt. Nary a scratch on any single retaining wall. The galvanized guard rails gleam in the harsh noon sun. This place isn't just new, it's almost completely unused. It's a pretty rare opportunity to test drive a new racetrack. The place is 3.15 miles and 23 turns, and there are four configurations with a possibility of two simultaneously operating smaller tracks: a two-mile, 13-turn west course and a one-mile, 11-turn east course. There's also a huge, 22-acre autocross and wet testing area and generous pit area.

What's great about the NCM facility is it's all for racing. There are no accommodations for spectators and currently no plans for it. In spite of the location's proximity and name, this isn't just for 'Vettes. "We're not a Corvette-only facility," said park General Manager Mitch Wright. "We're open to any group." Anybody with green money can rent it out. This ridiculously simple plan of laying down a challenging black ribbon and inviting people to play on it seems to be working. The place is booked up for 200 days over the next year.

So what's it like? In a word: challenging. The trend in track design incorporates huge runoffs and extra-wide corners to make apex passing a possibility, but NCM is not that at all. It's a place where being reckless will put you into a tire barrier or retaining wall rather than into pea gravel. It's tight, technical, old school and challenges the driver to develop control skills far beyond mashing the gas. We northerners often think of the South as relentless flatness, but in Bowling Green, there are hills and the track lives on them. There's a surprising amount of elevation change and the track turns that into blind corners and tricky bowls. One section that's been nicknamed "The Sinkhole" (for obvious reasons) is a 90-degree, off-camber, right-hander downhill into a decreasing-radius right, then immediately into a sweeping, uphill, blind left then immediately into a hairpin where there's no obvious line upon first pass. Or fifth. It's complexes like this that leave you wanting more. "At the grand opening weekend, I probably ran 200 miles on this course and just loved every minute of it," remarked Jeff Nowicki, of Corvette tuner Nowicki Motorsports. "It's a fun track." 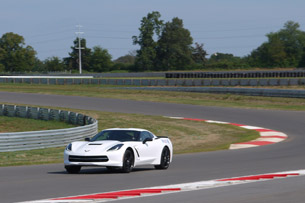 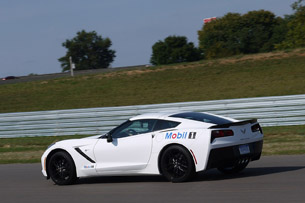 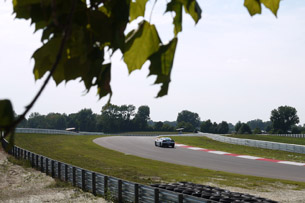 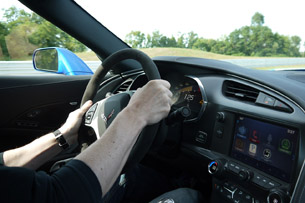 By the end of a good, fast lap, you're sweating, just as it should be. By the end of run ten, you're getting that too-big-for-your-britches feeling that comes just before an off. There's enough complexity that learning the proper line takes some time, but going too fast too soon will bite you. "When you do the outside course, they've designed it in such a way that you get a good sample of the corners, you see Mulsanne, the Porsche corner, the Kink. Our guys are looking forward to testing there," notes Gary Pratt of Pratt & Miller Racing. "Nice that it's a recreational track."

I'm no pro, so I would later hop into a Mobil 1-branded Corvette Stingray Z51 with GM ride and handling engineer Adam Dean (yes, the same Adam Dean who turned in a 7:37.4 Nürburgring lap in a Camaro Z/28, in the wet). After two laps around the west course, it was clear how much this track can be massaged by a world-class driver and how utterly, stupendously, ridiculously fast the new Corvette can be. There are very few modern tracks that offer such a balance of modern and old-school design. It's unique in the business, and well worth the time if you get the chance.