Jonathon Ramsey
To paraphrase Guy Fawkes V for Vendetta, 'Remember, remember the twenty-first of September.' That's the day the 2014 Formula One Championship took another big turn – and at one of the year's least interesting races, traditionally – putting Lewis Hamilton back at the top of the standings. Not only that, it did so by borrowing the template from the British Grand Prix this year: put Hamilton in front, retire Nico Rosberg.

It was close until then, though, Hamilton lining up on pole for Mercedes AMG Petronas just seven thousandths of a second ahead of Rosberg. Daniel Ricciardo, the year's greatest opportunist, took third ahead of his teammate Sebastian Vettel in the Infiniti Red Bull Racing, followed by Fernando Alonso in fifth for Ferrari. The Williams' looked like they'd be in trouble on Friday, but as usual they dredged up some pace on Saturday, Felipe Massa taking sixth ahead of Kimi Räikkönen in the second Ferrari, the second Williams of Valtteri Bottas in eighth. Kevin Magnussen saved a little bit of face for McLaren in ninth, and Daniil Kvyat did another solid job to line up tenth in his Toro Rosso.

Before it even started, the race wouldn't look the same. 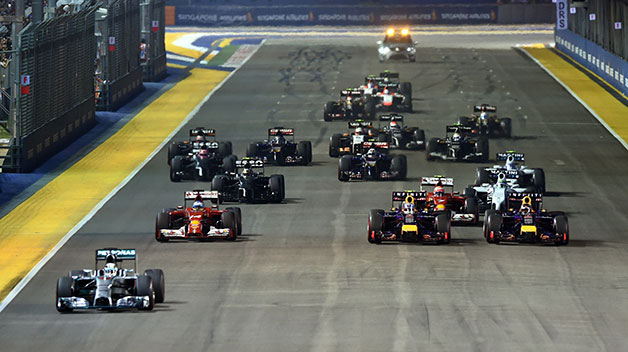 That's because the steering column wiring loom on Rosberg's car decided to quit in the Singapore heat just before the race. The team worked on it before lining up on the grid, changing his steering wheel, then kept at it while Rosberg sat on the grid, but the German couldn't make it off the line for the formation lap. They wheeled his car into pit lane so he could start from there, but it was futile – when the lights went out, he started, but all he could do was watch everyone else drive off into the distance while he loped around at the back of the field until he retired on Lap 14. 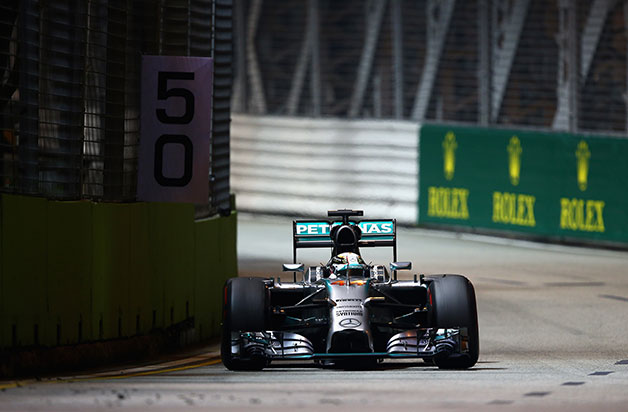 At go-time, Hamilton dashed off the line into the lead and never looked back, already 1.6 seconds ahead of the field on lap 2 and laying in more time at will, whenever he wanted. His only dicey moment came when, at the halfway mark, Adrian Sutil in the Sauber cut across on Sergio Perez in the Force India, destroying Perez's front wing and bringing out the Safety Car for seven laps; Hamilton drove over the debris, but on the first lap after racing resumed got 3.2 seconds ahead. That was it for trouble. When he needed to build a gap to make a third stop, he put more than two seconds a lap into Vettel behind and said, "If I need to pick up the pace, I can."

The Singapore circuit flatters Red Bull's aero efficiency and doesn't goad the team into a top-speed battle, and they made the most of it. Vettel got around his teammate at the start and claimed second place, then drove a quiet race to finish in the same spot - it's the current World Champion's best finish all year. His teammate Ricciardo took the third spot on the podium, having had technical problems throughout the race and under some late pressure from Alonso but able to hold the Ferrari off in the narrow confines of Singapore. 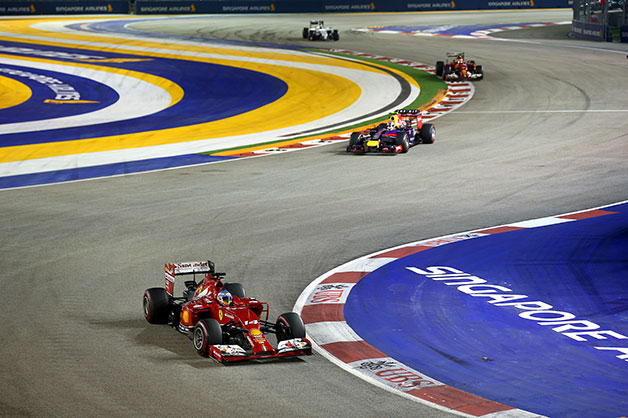 Alonso split the Red Bulls at the start and kept up with Vettel, then took second place after the second round of pit stops and managed to put distance on the Red Bull through the middle of the race. He fell back to fourth after his third stop, though, at the beginning of the first Safety Car period, when Ricciardo got ahead. The Spaniard stayed close to the Aussie but couldn't get around him, with Vettel, Alonso and Ricciardo "slithering around pretty desperately" on ancient tires.

Massa had run as high as fourth in the opening stages, after the first round of pit stops, then fell back to fifth. Williams' strategy of doing two stops instead of three put the kibosh on a better placing, Massa saying he was "driving like a grandma" to keep his tires in shape to the end. His teammate didn't fare so well, losing his eighth-place position on the very last lap because he was driving on threads, finishing eleventh. 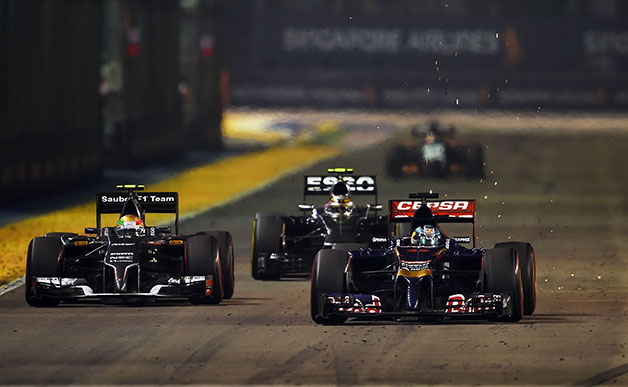 If Jean-Eric Vergne had driven throughout his entire F1 career like he did this race, he might not be trying to continue his F1 career. The Frenchman, out of a contract at Toro Rosso at the end of the season, qualified 12th, was on his teammate's gearbox and requesting team orders to get Kvyat to move over. That didn't happen, but he got up to ninth place after the first round of pit stops, stayed in the top ten and began storming through the positions in front with just nine laps to go. Don't be surprised to see his diving pass inside of Räikkönen in season recaps for a while, Vergne keeping sixth place even after two five-second penalties for driving infractions. 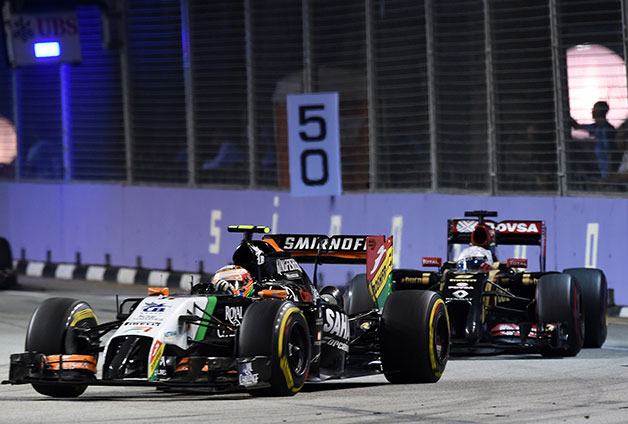 Sergio Perez recovered from that broken wing to take seventh, followed by Räikkönen in eighth – who said his car and his pace was better than it looked, and the second Force India of Nico Hülkenberg in ninth. Magnussen again saved a tinier bit of face for McLaren in spite of a burning water supply and a, literally, burning hot seat, to finish tenth.

Hamilton's win and Rosberg's retirement puts the Brit back in charge of the Driver's Championship by three points, 241 to Rosberg's 238 with five races to go. Ricciardo still sits in a comfortable third with 181 points. 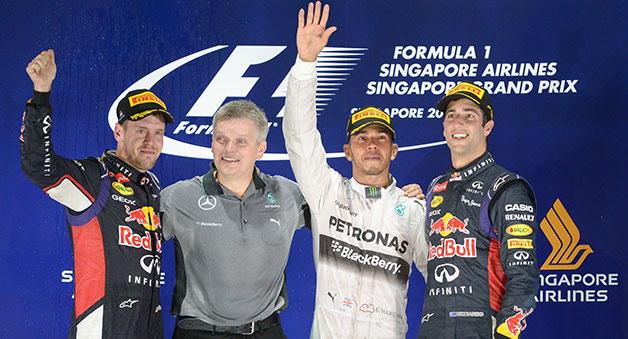 In the Constructor's Championship Red Bull took some points back from Mercedes, but it's still 479 points for the leaders compared to 305 for second place. Williams also gave up some of its lead to Ferrari, the English outfit with 187 points, the Italians with 178. Force India, on the other hand, ran ahead of McLaren, going from a one-point gap to six points, 117 to 111.

The next race is in Japan on October 5, and we can only ask, what will the Championship think of next?