(Re)Securing Its Spot At The Top View All Specs
Every car has its definitive year. Whether it be the Chevrolet Corvette, the Ford Mustang, or yes, even the ubiquitous Toyota Camry, 10.2 million of which have been sold since 1983, every car has its year. For the Camry, that year was 1992. With son-of- Lexus styling, a clear sense of purpose and a parent company that had hit its stride as the purveyor of faultlessly reliable family transportation devices, the Camry got its legs in 1992. It's a car that even your mom is likely to remember, even if she never owned one herself.

The Camry you see here represents the closest Toyota has come to emulating the magic formula that made the 1992 model the stuff of legends. Compared to the 2014 model, some 2000 of the car's 6,000 parts are new, most of them involving things you can see or touch (on the outside, for example, only the roof carries over from 2014).

It's not a full redesign, but nevertheless it's a stunning development considering the predecessor upon which it's based only survived two model years. That's a testament to both the hyper-competitive nature of the family sedan segment and the lukewarm critical response that the outgoing car garnered. But that's in the past now – after driving this 2015 model, we suspect the new car's changes will be thorough enough to continue pulling in new customers by the hundreds of thousands each year for the foreseeable future. 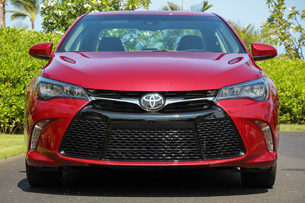 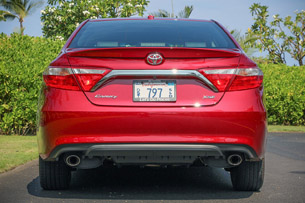 Camry's sculpted and elongated body gives it a sense of grace it hasn't had since 1992.

For starters, it looks great. Photos perhaps overemphasize the gaping, Avalon-inspired maw, but the Camry's sculpted and elongated body – 1.7 inches longer than its predecessor – gives it a sense of grace it hasn't had since the aforementioned 1992 model. Swoopy new headlamps walk the line between pretty and predatory, and hash marks running down the cheeks containing LED running lamps on some models, add a bit of edge. Out back is a remarkably clean decklid/bumper situation, including a tasteful spoiler on certain models.

The new-for-15 XSE model (seen here in V6 form) brings monochromatic paint, blacked-out exterior details, and sexy 18-inch black and machined wheels (compared to 16-inch steel wheels/covers on LE models and 17-inchers on LE and SE models). It's a look that attempts to close in on the Mazda6 in sex appeal, yet isn't so radical that your grandma won't get inside when it's time to take her to church. If there's a weak spot in the design, it's the C-pillar garnish that pretends to be a window but isn't; still, even that deserves some of the credit for making this car look a bit more like the '92. 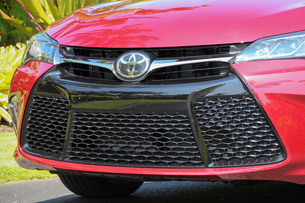 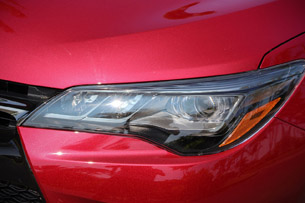 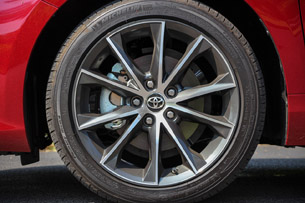 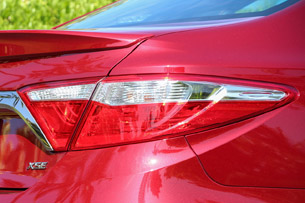 On the inside, nearly every surface with which the driver or passengers interact has been changed. It's still conservative, yet more upscale.

On the inside, nearly every surface with which the driver or passengers interact has been changed – nothing radical, but if we were to put it in, say, hotel terms, the Camry interior has gone from Courtyard By Marriott to, well, Marriott – still conservative, yet more upscale. The high H-point seats feature the now-mandatory contrast stitching, and you'll find a bit more soft (or soft-ish) touch stuff on the dash and door panels. Color schemes correspond closely to trim level – rental-grade grays for the appliance-like LE; sportier and more metallic-heavy with the SE (now four-cylinder only); sinister with the new XSE grade, with all-black leatherette/faux suede upholstery and red stitching; leather-lined and luxurious with the top-dog XLE models. The latter two trims also get rear seat air vents and dual-zone climate controls inside, as well as full LED headlamps on the outside.

The new Camry also steps up its electronics, starting with Optitron gauge clusters on SE models and above, and nice, three-dimensional primary dials flanking a new high-definition info screen. The XSE and XLE V6 models get charging ports behind a door in the dashboard, as well as larger touchscreens (7.0 inches vs. 6.1 on the rest) for their app-based Entune infotainment systems. Safety options come in the form of a pre-collision system, automatic high beams and blind spot monitoring with rear cross-traffic alert.

Toyota engineers retuned the Camry's shocks and springs for more responsiveness without killing the velvety ride quality for which the Camry is known.

Under the skin, there's not as much new stuff, but what has been changed is all vastly appreciated. As with many of Toyota's redesigned and refreshed vehicles, including the Yaris and Sienna, which we also drove this week in Hawaii (stay tuned), the Camry gets added structural reinforcements, including many more spot welds. This in turn has allowed Toyota engineers to retune the Camry's shocks and springs for more responsiveness without killing the velvety ride quality for which the Camry, and most Toyotas, for that matter, are known. A 0.4-inch increase in track gives all models a bit more of a planted stance.

The pre-production Camry models we drove on the mostly benign roads on the Big Island of Hawaii proved more responsive to inputs and less wobbly in corners than their predecessors, and the aforementioned XSE model is almost (though not quite) fun. We reviewed the Hybrid model separately, but from this author's perspective, it seems that all Camry models are even quieter than the cars that came before them.

One particular revelation involves the Camry's XSE's brakes, which are remarkably well tuned, thanks in part to a new two-stage master cylinder. Initial bite is crisp and response is linear all the way down the pedal travel. Stopping the car had us conjuring thoughts of the Mazda6, though with 60 to 100 pounds more weight than in 2014, the 2015 Camry still doesn't feel as light as the Mazda in any form. Also, if you want the most Germanic steering (i.e. with a bit of heft and a modicum of tactility through the wheel) point your browser to the XSE model and don't look at anything else. 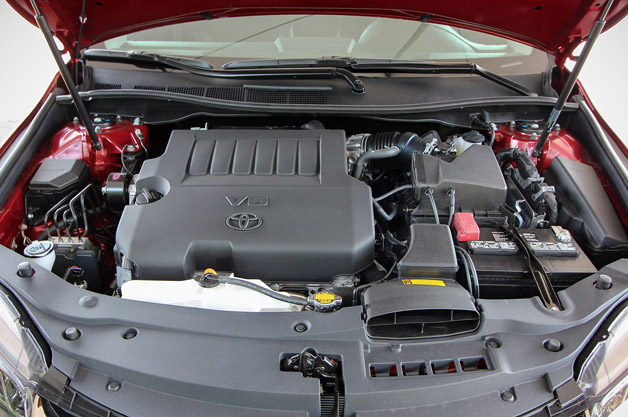 With 268 hp and 248 lb-ft, the 3.5-liter V6 is strong but course. And if those V6 stats seem familiar, it's because they haven't changed since the Bush administration.

If the Camry is a letdown in any particular respect, it's that the gas powertrains are virtually 100-percent carryover from before, and not surprisingly, they feel about as scintillating (which is to say not very) as ever. The standard 2.5-liter inline four-cylinder makes decent power – 178 horsepower at 6,000 rpm and 170 pound-feet of torque at 4,100 rpm – though it requires one to wind it out pretty good to get to it, and the six-speed automatic is none too playful a dance partner, even using the SE's manual shift paddles.

With 268 hp at 6,200 rpm and 248 lb-ft of torque at 4,700 rpm, the 3.5-liter V6 available only with XLE and XSE models is much stronger than the four-pot, of course, but its coarseness at high revs makes it none too enjoyable to access that power. And if those V6 stats seem familiar, it's because they haven't changed since the Bush administration. Therefore we're relatively certain that the V6 should be able to get the Camry to 60 mph in about 6.5 seconds, because that's what it's always done. The four-pot will probably take about a second or longer to do the same trick. And finally, EPA fuel economy estimates remain the same as before, at 25 miles per gallon city, 35 mpg highway for the four-cylinder and 21/31 for the V6. 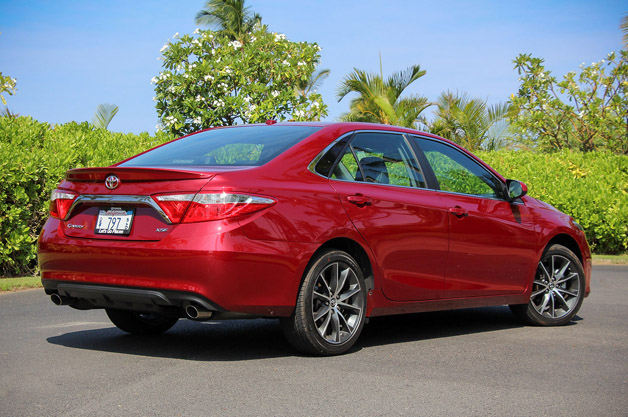 After driving the 2015 Camry, we'd say that this Toyota's spot at the top of the charts seems as secure as ever.

The stakes couldn't be higher for Toyota when it comes to this car's success. For the last 12 years, the sales crown has been Camry's to lose, and the competition from Honda, Mazda, Kia, Hyundai, Chrysler, Ford and others – to say nothing of compact and midsize crossovers – has gotten stronger than ever. But after driving the 2015 Camry, we'd say that this Toyota's spot at the top of the charts seems as secure as ever. 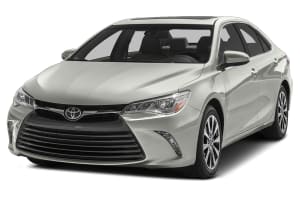