IRS won't, or can't, reveal how many plug-in vehicle tax credits are left

The IRS has set up a page to help track individual automaker sales figures, but it's a complete mess.

One of the benefits of driving a plug-in vehicle these days is a federal tax credit worth up to $7,500. Officially called IRC 30D, this credit is intended to make the high cost of new EVs sting less for early adopters. Of course, free government money doesn't last forever, and when the tax credit law was first passed in as part of the Energy Improvement and Extension Act of 2008, lawmakers built in a phase out. The rules say that the tax credit only lasts for each automaker until its first 200,000 EVs have been sold. After that, a company's qualifying vehicles (list here) will gradually net their buyers smaller and smaller tax credits – first 50 percent of the full amount for six months, then 25 percent for the next six months – over the following year until they're just gone. We've got the law's specific language at the end of this article.

Let's be clear: no automaker has come close to selling 200,000 plug-in vehicles in the US. Nissan and Chevrolet are closest with over 60,000 each of the Leaf and Volt, respectively, and Tesla is catching up. Still, EVs sales are doing better than some might expect, and with around 250,000 EVs sold throughout the US from all automakers – up from just 130,000 a year ago – we're likely to hit the 200,000 target before we know it. With that in mind, it'd be nice to know how the various companies and plug-in vehicles are selling. Automakers are supposed to file their sales numbers quarterly and the Internal Revenue Service is supposed to share those official numbers with the public (more on this below), but when you try to look up the data, things quickly get messy. If if it's not clear how many the IRS says are sold, then how will anyone know when the tax credits run out?

The IRS has set up a page that is supposed to help buyers figure out how much time is left for plug-in vehicle buyers to get a tax credit, and it tracks individual automaker sales figures. Trouble is, it's a complete mess. There are years' worth of data that the IRS is not making available to the public. Or perhaps some of it's the automakers' fault. Some plug-in models – most of them, in fact – don't even show up on the chart. This all needs to be fixed before someone goes to buy a Leaf, for example, expecting to get money back and then is served a nasty surprise. We know that when incentives run out, sales tend to suffer. 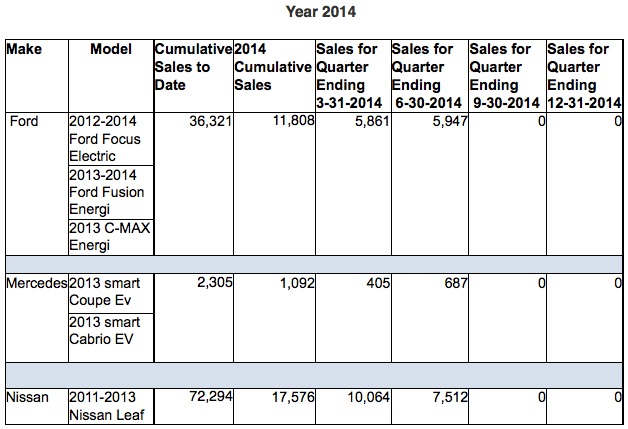 The Problem In A Nutshell

As you can see in the chart above and on the IRS' page, there are numerous models missing from the official tally. In fact, only six models have been reported. This, despite the fact that there are 24 manufacturers of qualified vehicles. The IRS clearly states, for example, that all Tesla vehicles qualify, that the Toyota RAV4 EV and plug-in Prius qualify and that even the Coda Sedan qualifies. Trouble is, none of these vehicles appear on the sales chart. The IRS says that the page was "last reviewed or updated" on September 2nd, 2014, so this isn't a case of a website simply being forgotten.


The IRS is not reporting all of the numbers, and the ones it is reporting seem to be wrong.

Then there's a problem with the numbers themselves. Looking at the government agency's numbers from last year, we see that the three qualifying Ford vehicles ( Focus EV, Fusion Energi and C-Max Energi) had a total of 20,409 sales in 2013. But, according to the official automaker's sales numbers, those three vehicles had combined sales of 14,981 vehicles in 2013. Now, we may have done our math incorrectly, but something clearly seems off here. For what it's worth, the sales numbers as officially released by the automakers each month also don't match what the IRS is reporting for them, during multiple years (2012 and so far for 2014). So, the IRS is not reporting all of the numbers, and the ones is it reporting seem to be incorrect.

Naturally, we've asked the IRS about what's going on here (we've been bothering it since May, in fact), but its answers have been less than satisfying. We wanted to know how the IRS gets the numbers that it puts up there – we asked if they are simply the sales numbers for the qualified vehicles as submitted by the manufacturers or if these figures are gathered using some other method. IRS media relations specialist Anabel Marquez would only give AutoblogGreen a simple statement:

The list of vehicles posted [online] is current based on the requirements of various federal tax law provisions. As noted here, manufacturers must meet the certification and reporting requirements described in Notice 2009-89. To be listed on IRS.gov, the manufacturer must also provide the IRS with a disclosure waiver.

Ah, so there's a waiver involved. Since we haven't heard that Volt and Model S buyers are having their tax credit requests rejected, we wondered if Chevy and Tesla, among others, simply hadn't provided the IRS with a disclosure waiver. But after we talked to a number of automakers, that doesn't appear to be the case. Kevin Kelly, manager of electrification technology communications for General Motors, tells AutoblogGreen, " GM has been providing our sales numbers to the IRS since launch of our products." Tesla spokesperson Liz Jarvis-Shean informs AutoblogGreen, "We're compliant with reporting our quarterly US sales to the IRS and submit this information to the IRS shortly after each quarter's close. One would assume that if Model S owners were having issues with this, you'd have heard about it."

Our friends at Plug In America were also confused by the IRS' numbers, so we've finally decided to take our confusion to the public. If the IRS can't figure out what's going on, perhaps one of you can help.