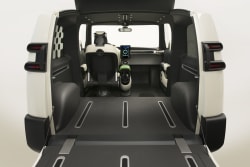 There's a quiet revolution happening in US cities. People want to mix an urban lifestyle with a connection to nature and appreciation for craftsmanship. The result of all of this is folks pursuing things as varied as urban farming, home brewing and the whole maker movement. Toyota thinks it has the perfect concept for these intrepid customers with its new Urban Utility – or, U-squared, not U2 like the band – concept that it is debuting during a panel discussion hosted by Make: magazine in San Francisco and debuting publicly on September 20 at the World Maker Faire in New York City.

The Urban Utility concept can best be described as a modern take on the old panel van. Designers from Toyota's Calty Design Research center in California interviewed Maker Faire participants to find out what its users want from a novel vehicle like this. "Toyota saw an opportunity for a new approach to an urban vehicle based on increasing re-urbanization of our cities and urban drivers' desire for flexibility, fun and maneuverability," said Kevin Hunter, president of Calty.

On the outside, the Urban Utility doesn't really scream for attention. It's meant to meet users "desire for greater utility but a smaller vehicle footprint," according to the release, but the shape is still very much a van. The designers do try to lend it some panache with the LED headlights up front and checker board side panels. It's really more about utility than looks, though, because the roof can roll back for taller loads, the rear glass retracts into the tailgate, and the whole rear can fold down as a ramp to load stuff more easily into the cabin. Toyota isn't talking about a powertrain yet but claims that the underbody is also especially durable for a long life in the big city.

Inside, things are a lot more adventurous. The cockpit has a mix of weird, organic shapes with an undulating steering wheel, oval speedometer and iPad. The oddest part of all is the center console that looks like the top of a bike emerging from the van, with the armrest as the seat and the gearshift displayed on the top of the head tube. A utility rail system in the back acts as a mounting point; plus all of the seats fold down when not needed. It should make loading very easy. Scroll down to read Toyota's full release about its urban-centered console, and to see a brief video walk-around of the concept.

Developed by Toyota's Calty Design Research in Newport Beach, California, the Toyota U2 concept features a new open architecture and purposeful materials that redefine urban utility. Designers included the ability to roll back the roof, fold down the tailgate into a ramp and customize the interior on a versatile rail system. The concept car will make its first public appearance at World Maker Faire in New York City on Sept. 20 and 21.

"Toyota saw an opportunity for a new approach to an urban vehicle based on increasing re-urbanization of our cities and urban drivers' desire for flexibility, fun and maneuverability," said Kevin Hunter president of Calty, Toyota's North American design studio. "Calty keeps a number of projects concealed while exploring ideas and products. Revealing a project like the U2 gives people a window into the constant innovation that happens inside Toyota and our Calty studios and one possible future for urban mobility."

Bringing the concept to a Maker community event allowed Toyota to gain feedback from a key audience.

"As more products are developed expressly to appeal to Makers and their deep appreciation of design esthetic combined with open architecture and practical utility, we expect to see more trusted brands like Toyota take an unconventional approach to not only product development but their marketing and launch strategies," said Sherry Huss, VP and co-founder of Maker Faire. "Leveraging the growing Maker movement and Makers' broad sphere of influence can impact the success of consumer brands and future products."

Among the U.S. trends that influenced the Calty design team were a growth in entrepreneurship and Americans' love of adventure, especially outdoor activities involving gear and equipment. Drawing on these insights, the Toyota U2 concept is a flexible, functional gadget that owners can customize according to individual, on-the-go needs. The retractable utility bar can serve unique uses, such as holding a desk or grocery bag hooks. Side windows flip up for easy access from roadside.

Other key interior highlights include:

Toyota research showed the fast-growing small SUV segment points to a desire for greater utility but a smaller vehicle footprint. The Toyota U2 concept is the size of a compact car with the functionality of a compact truck and the spaciousness of a cargo van. It satisfies other key urban driver priorities including good fuel economy, maneuverability in city environments and easy loading and unloading.

An Exterior for the City

City streets call for a vehicle that can handle bumper-to-bumper traffic, potholes and tight corners. The Toyota U2 concept has an extremely durable underbody and tool-like exterior with a customizable side panel. The iconic, modern design remains playful, with details such as circular door handles and a slightly chucky proportion. The box-like design at the rear emphasizes the storage capabilities.

Highlights of the exterior include:

 Roof panels that retract open
 Rear glass that can slide into the tailgate
 Tailgate that folds down into a ramp
 Protective, replaceable ridges on tailgate

After its public reveal in New York, the Toyota U2 concept will return to the Calty studio in California. For more information about Toyota innovation, visit http://www.toyota.com/usa/operations/design-research-development.

Toyota (NYSE:TM), the world's top automaker and creator of the Prius, is committed to building vehicles for the way people live through our Toyota, Lexus and Scion brands. Over the past 50 years, we've built more than 25 million cars and trucks in North America, where we operate 14 manufacturing plants and directly employ more than 40,000 people. Our 1,800 North American dealerships sold more than 2.5 million cars and trucks in 2013 – and about 80 percent of all Toyota vehicles sold over the past 20 years are still on the road today.

Maker Media is a global platform for connecting makers with each other, with products and services, and with our partners. Through media, events and ecommerce, Maker Media serves a growing community of makers who bring a DIY mindset to technology. Whether as hobbyists or professionals, makers are creative, resourceful and curious, developing projects that demonstrate how they can interact with the world around them. The launch of Make: Magazine in 2005, followed by Maker Faire in 2006, jumpstarted a worldwide Maker Movement, which is transforming innovation, culture and education. Located in Sebastopol, CA, Maker Media is the publisher of Make: Magazine and the producer of Maker Faire. It also develops "getting started" kits and books that are sold in its Maker Shed store as well as in retail channels. The Make: brand caters to a universe of more than 25 million makers collectively across its Make: magazine, makezine.com, Maker Faires, and Maker Shed properties.