The Ford C-Max hatchback looks to be getting a few cosmetic updates, as evidenced in this latest set of spy photos. Like the smaller Focus, which also received a nip/tuck for the 2015 model year, the C-Max appears to be getting a revised front fascia with slimmer headlamps and a more, shall we say, Aston Martin-like grille. Around back, there looks to be a new bumper with redesigned taillamps, as well.

In other markets, the C-Max people-mover is available with a range of powertrains, but here in the US, it exists either as a traditional gas-electric or plug-in hybrid. The C-Max's fuel economy has been a particular topic of interest lately, with its official fuel economy ratings having been lowered twice since the vehicle's launch. Sales initially suffered a bit following this fiasco, though numbers have since leveled out. It's unclear if Ford is working on any powertrain tweaks for the updated C-Max seen here, however.

Ford has likely spruced up the hatch's interior, as well, though we don't have photos of that at this time. Mum's the word on when we'll see the new C-Max, but our best guess is that it'll arrive sometime in the next year. 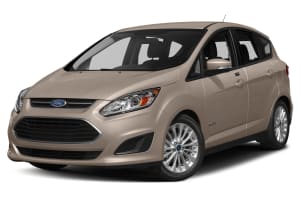