When a Bugatti Veyron crashed on a highway in Austria a few months ago, insurance company AXA estimated the cost of repairs at upwards of $800,000. Of course, there were worries that even after all the repairs the car may never drive quite the same. So rather than try, the insurance company evidently wrote it off and paid the owner the insured value of the car. But now it's got the wrecked Bugatti on its hands, and is looking to offload it.

This early model, built in 2008, has the original version's 987-horsepower 8.0-liter quad-turbo W16 engine, a fixed roof and a blue and black livery – unlike some more recent examples that have adopted a removable roof panel, employed a more powerful 1,184-hp engine and moved away from the original two-tone paint schemes. It's got nearly 20,000 miles on the odometer and would still require the better part of a million bucks to get it running again... at which point it could be worth more in spare parts, which surely don't come cheap from the manufacturer in Molsheim.

Alternatively, with bidding currently hovering around a quarter million, you could just get yourself a brand spankin' new Ferrari 458 Italia, Lamborghini Huracán or McLaren 650S and actually get to drive it without spending eight hundred grand on repairs. But if you were looking to pick up a Veyron on the cheap, regardless of condition, this could be your chance. 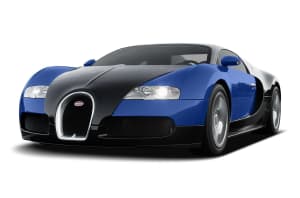