eBay Find of the Day: 2006 Chevy Corvette custom is a two-tone wonder We know what you're thinking, and yes, friends, it can be yours. This two-tone Chevrolet Corvette comes from Eagle, Idaho, a product of Z and M Customs in homage to the Corvette Stingray Concept that played the Autobot Sideswipe in the second Transformers film, Transformers: Revenge of the Fallen. According to the seller, Arcturus401, Z and M only got nine of them out the door before General Motors expressed a lawyerly displeasure, and this is the only two-tone example among them.

Underneath the custom panels lives a 2006 C6 'Vette with an automatic transmission, black leather interior and extras like a head-up display, cold-air intake, a hood that opens electronically and a custom exhaust. A two-owner coupe, it's got 59,900 miles and a salvage title, but we're told its original owner only had the Transformers plastic surgery done in 2011.

Having just relisted it, at the time of this writing, the bidding is up to $6,200, and we don't see any notes about a reserve. If you're into this sort of thing, that could be considered a bargain: when another one of those nine owners put his blue example on eBay in 2010, he wanted at least $42,500. If you'd like more Z and M bona fides before hitting the 'Bid' button, they've done a Pontiac-based Lamborghini Aventador replica, too. 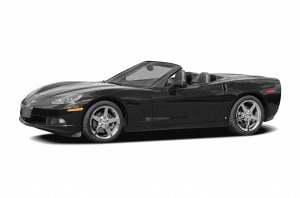