Brandon Turkus
Tech nerds are spoiled. Every year, there's a new iPhone that arrives following months and months of breathless speculation and rumormongering. We car folk have a more difficult life, because vehicles with the iPhone's cult-like devotion and following, while plentiful, only receive hefty updates after several years. Case in point, the Mazda MX-5.

There's a new one coming, and much like the iPhone 6, it'll arrive in just a few weeks. So, in lockstep with the tech folk, we're anxiously biding our time and waiting with bated breath for the expected debut date of September 3. Also, like Apple fanboys, we're clamoring over any hint or teaser as to what the next-gen Miata will bring, which is why we're showing you the above image.

That is, allegedly, the new MX-5 hiding under the sheet. Auto Motor und Sport has the image, which according to World Car Fans was released by Mazda. Of course, we've reached out to the Zoom-Zoom brand for verification of its authenticity, and will be sure to update as soon as we hear back.

Until then, what can we see on this sheet-festooned roadster? Well, the wheel arches look suitably flared, while the traditional long-hood, short-deck look of the past three generations of Miatas soldiers on. According to Auto Motor und Sport, the track has been widened, while the wheelbase has also been stretched. The big news is that the new car should trim around 100 kilograms (220 pounds) of body fat and that it will boast a perfect fifty-fifty weight distribution.

Of course, should we hear anything more, we'll be sure to update you. Stay tuned. 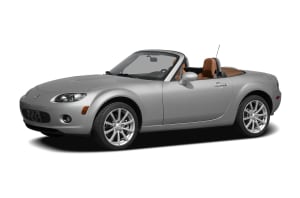