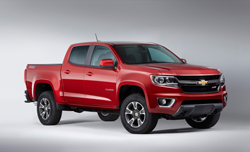 The invitation to come out and sample product at the General Motors Proving Grounds in Milford, MI is rarely dull, and after spending this morning driving preproduction versions of the Chevrolet Colorado and GMC Canyon all we can say is... under strict embargo. Sorry, America, we were as excited as many of you are to learn more about GM's new midsize truck range and take note of how they go down the road, but it's going to be September before we're allowed to share that with all of you. Here's to sweet suspense.

While we might not be able to talk about refinement or handling yet, we did find some of the product positioning and marketing statements from GMC and Chevy officials on hand at the program to be pretty interesting.

Of course, we all know that the literal competitive set for Canyon and Colorado is comprised of two comparatively ancient Japanese midsize trucks: the Toyota Tacoma (which currently owns this segment) and the Nissan Frontier. The Frontier's bones are as old as the 2005 model year, with 2009 marking the last time the truck was updated. The Taco was also launched in 2005, though it did see a freshening for 2012. The point remains that, in every facet from powertrain to dash plastics, the GM midsize truck twins are going to look positively space age by comparison when they hit the market for MY 2015.

Interestingly though, The General isn't simply shooting for its aged, small-truck competitors when it comes to the planned conquest of customers. The automaker believes that both Chevy and GMC products will offer an interesting alternative to small-crossover shoppers as well. In fact, the engineering and marketing teams were possessed of this notion enough to bring along a Ford Escape as one of the competitive drives for our test day in Milford.


GM believes that both Chevy and GMC products will offer an interesting proposition to small-CUV shoppers.

Certainly, images of the Canyon and Colorado interiors that we've seen indicate that these two trucks will have cabins worthy of suburban tastemakers; full of the available comfort and convenience amenities that CUV shoppers are so keen on. Just as in their fullsize brothers, we expect these smaller trucks to be comfy places in which to pass your daily commute. We'd argue that the exterior styling of the trucks is a fit with the CUV ethos, as well.

Looking deeper, we can also see that the new trucks will probably offer reasonable tradeoffs in terms of utility, performance, mileage, space and price. Just comparing base models, the Chevy Canyon's 2.5-liter four-cylinder, rated at 200 horsepower and 191 pound-feet of torque, is slightly stronger than the average output of four-bangers from Ford, Honda and Toyota small crossovers. Now, the Canyon is likely to be somewhat thirstier than the 26 combined miles per gallon that those three offer, but it'll also offer a decided boost in tow/haul utility is the most obvious pickup strong suit.

And, of course, while we don't yet have pricing, sticking around the low $20k starting MSRPs of the best-selling small crossovers seems quite doable. Bare bones Tacoma and Frontier trucks start at $18,125 and $20,510, respectively, leaving a good gap to appropriately price the content-plus new trucks, and still stay in-budget for a typical CUV shopper.

Those tradeoffs won't work for a lot of CUV buyers, but the argument on paper is quite a bit more compelling than we would have initially thought. GM apparently believes it, as it's jumping with two feet into a segment that most automakers have abandoned or at least let wither on the vine. What say you? Would a more livable, frugal pickup make sense to you as a cross-shop with a smaller crossover? Let us know in Comments.