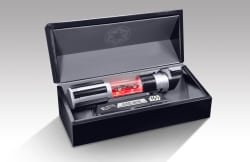 Let's face it; Darth Vader is a thousand times cooler than Luke Skywalker. The hero might get the girl, but in the case of Star Wars, it's his sister. Vader, though, controls the Death Star, two of them in fact. It turns out that the Sith Lord has a meaner car too, at least thanks to Hot Wheels.

With Star Wars a hotter property that the surface of Tatooine thanks to the new movie due in 2015, Hot Wheels has partnered with the brand to sell replica vehicles and playsets later this year. It's kicking off the new toy line with a life-size, fully operational, one-off Darth Vader Car at San Diego Comic-Con on July 23.

According to Hot Wheels to Autoblog via email, the Darth Vader Car "was designed in-house at Mattel" and built by Picture Car Warehouse. It uses a tuned LS3 V8 to send 526 horsepower to the rear wheels and has a backlit, side-exit exhaust system. The nose piece is made from carbon fiber, and it rides on a custom set of wheels from MHT. If you can't make it to San Diego to see the Vader, don't fret. "It will certainly be making appearances after Comic-Con for fans," said a company spokesperson.

The earlier image we saw of the car looked downright ugly, but the Sith's helmet made the transition into real life with a lot more menace. You could easily imagine the Vader as a very wicked-looking hotrod. The triple headlights and split windshield are especially nice touches.

If you happen to be at the con, you can even buy the 1:64 toy version of the car that comes in a case that looks like Vader's red lightsaber, plus a commemorative box, for $40.00. There will also be a limited number on sale after the show at Hot Wheels Collectors. Scroll down to watch the Vader Car in action with some very over-the-top dialogue and read the full announcement of the official vehicle of the dark side of the force.

DC Universe Classics: One of the most demanded figures in the DCU Classics Signature Series-Doomsday-finally arrives! On-sale at SDCC, this massive 9" tall maniac had the ultimate face-off with Superman™ in the best-selling issue of Superman #75. For the first time in toy history, Doomsday sports his signature containment suit!

Ever After High: For the first time, the teenage sons and daughters of famous fairytales join the SDCC party. To spellebrate the occasion a unique student, Cerise Wolf, daughter of The Big Badwolf, will be on sale. Get your paws on her fast as pre-sale units sold out in only 28 minutes! Visit the Ever After High Booth for photo opportunities and be there Friday at 2:00pm for a signing with Shannon Hale, author of two Ever After High New York Times Youth bestselling books.

Minecraft First Look: Get ready to dig in to the world of Minecraft! Teaming with Mojang AB, Mattel debuts a line of Minecraft-inspired items that bring the game to life in ways you've never seen before. Join on Sunday, July 27th for autographs and photos with the one and only iHasCupquake!

Celebrate the 30th anniversary of one of the most iconic action starts of the 80's - She-Ra Princess of Power! Swing by the Mattel booth to pick up our SDCC Etheria Invasion Hordak, the first ever released of She-Ra's arch enemy in animation colors, including his sidekick Imp and EXCLUSIVE to SDCC, as a free gift with purchase receive Imp disguised as a Treasure Chest free! Also join us for an incredible She-Ra Cos-Play contest, collect She-Ra buttons and much more!

Two of the world's top global entertainment companies have teamed up for the ultimate panel at SDCC. WWE Superstars and Matteldesigners will talk about the all-new WWE Network and give exclusive sneak peeks of Mattel's upcoming WWE figure releases! Incredible guest appearances: Hulk Hogan, Daniel Bryan, Michael Cole™, Paul Heyman™ and you never know who else may drop by. This is a panel you won't want to miss, brother!

Celebrating its 6th year at SDCC, come get the inside scoop on your favorite collectable toys from Mattel: Masters of the Universe®, DC Comics™, Ghostbusters™ and more! Plus be there to hear the latest news on the future of MOTU Classics! This panel will also include an insightful Q & A with Mattel Marketing Manager Scott "Toy Guru" Neitlich, Mattel Toy Designer Brandon Sopinsky, Digital Content Strategist Eve Orio and special guests The Four Horsemen. If you go to one Toy Panel at SDCC, make it Mattypalooza!

The Mattel family of companies (Nasdaq: MAT) is the worldwide leader in the design, manufacture and marketing of toys and family products. Mattel's portfolio of best-selling brands includes Barbie®, the most popular fashion doll ever produced, Hot Wheels®, Monster High®, American Girl®, Thomas & Friends® and Fisher-Price® brands, including Little People® and Power Wheels®, MEGA® Brands, including MEGA BLOKS®and RoseArt®, as well as a wide array of entertainment-inspired toy lines. In 2013, Mattel was named one of the "World's Most Ethical Companies" by Ethisphere Magazine and in 2014 ranked No. 5 on Corporate Responsibility Magazine's "100 Best Corporate Citizens" list. With worldwide headquarters in El Segundo, Calif., Mattel's companies employ nearly 30,000 people in 40 countries and territories and sell products in more than 150 nations. At Mattel, we are Creating the Future of Play. Visit us at www.mattel.com, www.facebook.com/mattel orwww.twitter.com/mattel.