Hyundai Azera fate in question for US The Azera has been consistently outsold by its rivals. Through June, Hyundai has shifted just 4,191 units.

Hyundai's dealers call the Azera the "nicest car nobody knows about." That's according to Mike O'Brien, Hyundai Motor America's vice president of corporate and product planning. Indeed, the fullsize sedan is a handsome, well-rounded machine, loaded with creature comforts. Yet it's not selling well, and its space in Hyundai showrooms is about to get a whole lot more crowded thanks to the newly spruced-up 2015 Sonata. No surprise, then, that company officials admit that the model's future in the US is uncertain.

The Korean automaker's Sonata family sedan has all-new styling that's a lot less divisive than last year, with a more conservative, crisply tailored aesthetic that reads upscale, particularly in higher-end trims. It's also larger inside, offers a more refined interior, and comes with more available creature comforts and safety features. In other words, the Sonata's redesign is poised to make the Azera's business case even more problematic, especially as the new midsizer starts at just $21,150.


The The 2015 model-year Azera will be a late arrival this fall, but after that, its fate is an open question.

Hyundai's manager of product planning for Azera and Sonata, John Shon, says he still sees daylight between the newly matured Sonata, the Azera and the company's pricier Genesis Sedan. "We look at it [Azera] as a large car, and as a near luxury car – it sort of straddles that gap. Also, we don't have a V6 engine, the Sonata has a 2.0-liter turbo." Shon continues: "One of the great things about Azera is it's a customer-loyalty product. When we look at who is buying the product, over half the buyers are previous Sonata owners, so it's the move-up vehicle."

But the step up benefit isn't as clear in light of the new Sonata – there's little difference between it and the Azera in terms of cabin space in both specific dimensions like headroom (Azera: 40.3 inches, Sonata: 40.4 inches), overall passenger space (107 cubic feet vs. 106.1) or cargo space (16.3 cubic feet for both). Performance figures are similar between the two (with the exception of fuel economy, where the Sonata is significantly better), and interior materials and refinement levels are similar now, too. It doesn't help that Hyundai hasn't earmarked much in the way of a marketing budget for the Azera, instead preferring to focus on its US-built offerings like the Sonata and Elantra.

The 2015 model-year Azera will be a late arrival this fall, but after that, its fate is an open question. When Autoblog asked Shon if America will see a next-generation model, he admitted, "[That's] to be seen at this particular point... obviously we'll see what the market take-rate for the Sonata is, how the Azera continues to do, how the Genesis continues to do."

There's little doubt that a third-generation Azera will be made, as the car is a strong seller in Hyundai's home market. "That vehicle is a Korean domestic market vehicle," says Shon. "They sell over 100,000 of those a year there. So the vehicle will be built, engineered. Whether we import it into the US is still to be determined." 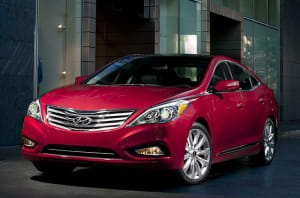