Clarkson is so recognizable a figure, anything and everything he says or does reflects on Top Gear, whether good or bad.

We happen to fancy ourselves as pretty good at taking a joke. In this day and age of political correctness and walking on eggshells so as not to offend anybody, it's almost refreshing to hear some funny words directed at the various factions of the world in which we live. With so much diversity on our lovely planet, on the other hand, you can bet that somebody, somewhere, is going to take offense with pretty much any opinion you might hold. For some, being offensive is just a fact of life.

Few, though, have the knack for offending down to a science like the boys from Top Gear, and that's particularly true of the show's most visible and vocal figure, Jeremy Clarkson. Some of Clarkson's distasteful language has come from the television show, while some was penned in his regular column in the newspaper. No matter where he's been published, Clarkson is so recognizable a figure that anything and everything he says or does reflects on Top Gear as a whole, whether good or bad.

The most recent snafu that landed Top Gear in the wrong end of the news, in which they staged a crash in Peugeots at the exact location where a young woman lost her life in her own personal Peugeot, was described by a local politician as "reckless and insensitive." TG, for its part, maintains it had no foreknowledge of the fatal accident, but either way, that incident is just the tip of the offensive iceberg, so to speak.

Scroll down below to sort through the ten most offensive mistakes that have landed Top Gear in trouble.

10. Suggesting that babies should ride with luggage on airplane flights


When will British Airways realise that babies belong in the hold?


This one is pretty innocuous. Really, anyone who regularly flies has probably had the same thought, or at the very least hopes and prays that they don't get seated in a row next to a crying infant. Besides, nobody really thinks Clarkson was being serious, right? Still, many were offended when Clarkson tweeted out these words last year, and they went public with their claims, and so it lands in the Number 10 spot on our list.
9. Writing inflammatory statements with spray paint on beater cars in the Southern US

"I'm bi," "Man love rules OK," " NASCAR sucks" and "Hillary for President." On the surface, this one sounds mostly lighthearted. Taking a jab at NASCAR is rather commonplace in some automotive circles, and there were a good number of Americans who had hoped to see Mrs. Clinton take a run at the White House several years back. The man-love and bisexual commentary may be a bit more sensitive an issue, though. In any case, the Southerners who spotted the Top Gear crew with these words spray-painted on their thousand-dollar beaters weren't amused, with Clarkson, Hammond and May fleeing for their lives and vowing never to return.


8. Testing the Tesla Roadster with a scripted and fake scene of it running out of power 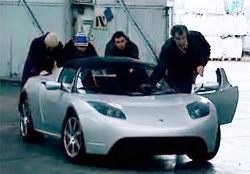 Electric-vehicle proponents found themselves in a tizzy after Top Gear presenter Jeremy Clarkson filmed a review of the Tesla Roadster in which the high-speed EV was shown running out of juice, requiring a push to get back to the garage for a recharge after just a few hot laps of the show's test track. Only one problem: The car never actually ran out of charge, the scene being planned all along to fit the show's specific agenda. Whoops ( not really).
7. Calling people who commit suicide by jumping under trains "selfish"

If there's one specific person who perhaps shouldn't be wrangled, it's someone actively contemplating suicide. Normally, such individuals are calmly talked down from the ledge, as it were, before their life is snuffed out. At least that's the hope. Clarkson drew the ire of suicide prevention and counseling groups for saying that those who commit suicide by jumping in front of trains are selfish, further suggesting that the trains should resume their normal service as quickly as possible. This dustup resulted in British newspaper The Sun, which runs Clarkson's column, sending its staff through sensitivity training after an official apology was made.


6. Mocking Indian culture, disguising themselves as women, and replacing Jesus with The Stig and the Three Wise Men with themselves in holiday special shows 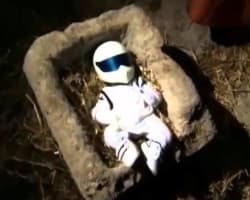 Top Gear garnered a number of official complaints for its depiction of life in India – offensive remarks targeting such diverse bits of culture as Indian clothing, trains, food and history, according to our initial report – in its holiday special at the end of 2011. You'd think they'd have known better, though, after invoking the ire of both Muslims in the previous year's holiday special by disguising themselves as women using niqāb headwear and Catholics by replacing Jesus with The Stig in a mock nativity scene. Or perhaps that's precisely why they did it.


5. Saying, "Mexican cars are just going to be lazy, feckless, flatulent, overweight, leaning against a fence asleep looking at a cactus with a blanket with a hole in the middle on as a coat"

This one is pretty obvious. Richard Hammond was pretty clearly suggesting that Mexican cars would be terrible because people that live there are fat and lazy. Clarkson further riled Mexicans when he followed Hammond's statement by saying they wouldn't get in trouble over it because the Mexican ambassador would be sleeping. Said ambassador was quite awake, however, and he responded exactly as you'd expect.


4. Filming a fake VW commercial that jokes about the Germans invading Poland in World War II

A quick glance up at this story's byline is all it takes to know that your humble author is of Polish descent. And so I speak from experience when I say that Polish people are used to being made fun of. Still, it's one thing to tell a Polish joke or two, and it's another entirely to recall the atrocities of World War II, kicked off as it was in 1939 by the invasion of Poland, in the name of a laugh.


3. Suggesting that striking workers in Great Britain be executed in front of their families

"I would take them outside and execute them in front of their families." Yikes. Those words were directed toward workers who had gone on strike in Great Britain. Clarkson continued, "I mean, how dare they go on strike when they've got these gilt-edged pensions that are going to be guaranteed while the rest of us have to work for a living?" The social commentary landed Clarkson in hot water, and he issued an apology after Dave Prentis, the general secretary of Britain's largest trade union, said Clarkson's comments "were totally outrageous, and they cannot be tolerated." Prentis had called for Clarkson to be fired, but an apology is more than most of the offended parties have received.


2. Using the term "slope" to refer to Asians, then issuing a questionable apology

In a special episode filmed in Thailand, Clarkson, Hammond and May build a bridge over a river (that was not the river Kwai), then drive massive lorry trucks across the amateur overpass. The opprobrious bit comes into play when, admiring their work, Clarkson points out to Hammond that "there's a slope on it." The term "slope," in case you're unaware (and many weren't), is a derogatory way to refer to Asian people, one of whom was standing on the bridge when the scene was filmed. Bad enough to use a racial slur – this one ignited a $1.66M lawsuit – but the so-called apology that came afterward was possibly even worse, in which Executive Producer Andy Wilman first claimed ignorance, then admits guilt.

This one's the biggie, eliciting a response and seemingly heartfelt apology from Clarkson himself, along with a vote of confidence from co-host James May. Back in May, Clarkson was taped in a video segment mumbling the words to a children's nursery rhyme in which he may or may not have used the N-word. It's pretty difficult to understand what's actually said, but the response was significant enough that Clarkson sounded legitimately in fear of losing his job at Top Gear, saying that the BBC will fire him if he makes "one more offensive remark, anywhere, at any time." For those keeping track, this isn't the first time Clarkson has come under fire for commentary that refers to someone's skin color.


So there you have it, and we've just scratched the surface. Suffice it to say that many, many people have found themselves on the receiving end of a Top Gear barb, and a good number of them have turned around and aired their grievances in public.

The question that remains after all is said and done, though, is whether or not Top Gear and Jeremy Clarkson in particular should bow to the throngs of complaints, toning down their perceived insensitivity level so as not to offend. We'll leave that for others to decide and discuss. Feel free to do just that in the Comments.