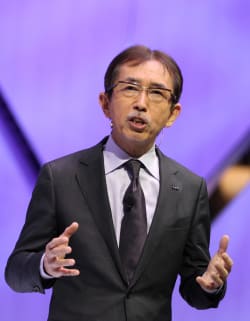 One of the greatest innovations to come about thanks to the gigantic popularity of Reddit is the Ask Me Anything (AMA) question and answer format. The AMA becomes especially worthwhile, of course, when the person(s) answering the questions have detailed information or insight on products we love.

So, in the case of the recent AMA session with Gran Turismo creator and mastermind Kazunori Yamauchi (above), and his buddy and Nissan chief designer Shiro Nakamura (right), it was basically must-read stuff.

The pair really lived up to our expectations, too, with Kaz offering a lot of useful information about the future of the Gran Turismo franchise (especially the upcoming GT7 for Playstation 4), and Shiro promising to bring some interesting new ideas back to his colleagues at Nissan.

We'll start there, as Shiro's bit is quicker. Perhaps the most interesting response to a question that the Nissan designer gave all day was when he was asked about any interest in doing a Nismo-tuned Titan. Probably nothing more than a flight of fancy at this point, but Shiro's response was enthusiastic:

"A Nismo Titan? A very interesting idea. We've never thought about it. If you think about it, a big-engined truck is almost like a sports car. Two passengers, fun to drive – it's a fun idea. I will take your request back to the office with me."

Ford Raptor, watch your back.

As for Kaz, well, the Polyphony Digital head honcho was dropping tantalizing knowledge all over the forum. Here are some of the highlights: