The weather didn't interrupt the Pikes Peak International Hill Climb this year, the sun staying out to shine throughout a mildly cloudy day. The crowds didn't interrupt the race, either. Last year there were incidents like the woman who leaned so far into the road that her camera tore a hole in a speeding Shelby Cobra and she had to be sent to the hospital. This year the organizers shrank the number of spectator viewing areas and put others behind fences, such that long stretches of the route were uninhabited by anything other than varmints.

The only unexpected visitor was a dusty track and what some competitors said were slightly higher temperatures that changed the amount of grip and increased times. Yet the calm let a couple of teams, like that sun, break through the clouds of past misfortune and claim victories they'd been targeting for years.
Unlimited
Romain Dumas – 9:05.801, 1st overall
Rick Knoop – 10:16.737, 14th overall
Steve Goeglein – 10:30.704, 18th overall 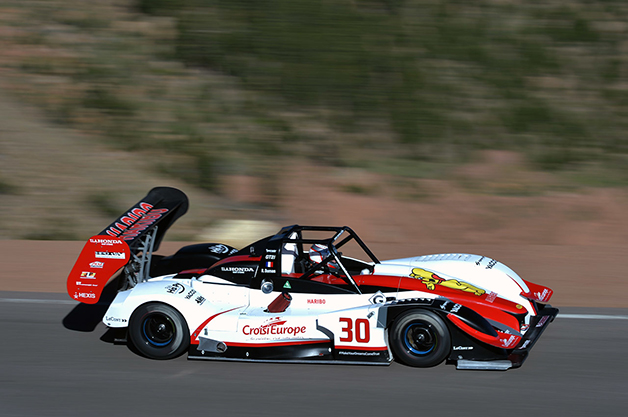 Romain Dumas, now a Porsche LMP1 factory driver, came to the mountain the first time in 2012 in a Porsche 911 GT3R. He won Rookie of the Year but finished second to Rhys Millen, who that year broke the overall record with a time of 9:46.164. The margin of victory: Dumas lost by 0.017 of a second. In 2013 nothing but the mountain itself had a chance of beating Sébastien Loeb, but Dumas didn't get a chance to try because his Norma M20FC PP stopped on course with a broken gearbox just after the start.

This year, with a clear track, good weather and no Loeb or Rhys Millen, Dumas took his Norma M20 RD Limited to the top with a winning time of 9:05.801 in the Unlimited class. Dumas said "We made some mistakes, especially in the tires," but, "I knew I was running smoothly, so I didn't want to take any risks. It was a clear run. It was not incredible, but it was enough to win and that was the target anyway." He expected to run around 8:40, but even so he beat his next class competitor, Rick Knoop in the dastardly, Lister-based 1958 Knoop-Mann special by a minute and eleven seconds. 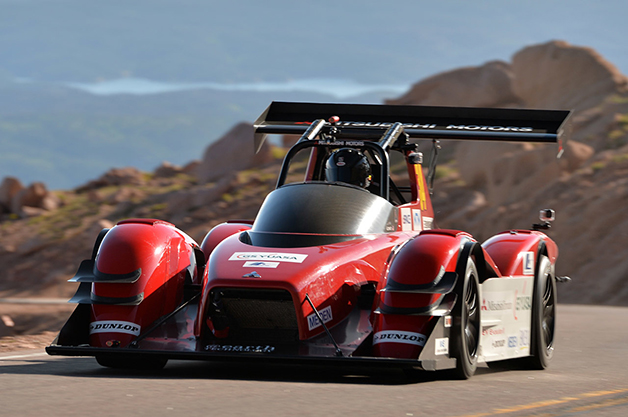 Like Dumas, Mitsubishi got to scratch its three-year itch. The team came to Pikes Peak in 2012 with the i-MiEV Evolution, upgraded to the MiEV Evolution II in 2012 and the more powerful, 300-pound lighter MiEV Evolution III this year. Avenging the weather-spoiled run of a year ago and providing one of the biggest surprises this year, Greg Tracy finished just 2.387 seconds behind Dumas in his red racer, taking first in class, second overall, the fourth-fastest time ever after Loeb in 2013, Millen in 2012 and Dumas this year, and the only man to do a sub-ten-minute run on two wheels and four. Teammate Hiroshi Masuoka finished third, four seconds behind Tracy.

Comparing this year's run to last year after making the move from motorcycles to a car, Tracy said, "Last year I just showed up, got a half day of testing and just had to make sure not to stick my head over the curb because that meant my wheels were off the mountain." Even given a year to work with the team and tweak his car, to get the win he said, "I had to take chances and I made some mistakes, but we spent the past week working on the Super All-Wheel Control to give me a little less traction in slow corners" so he could work the back end. "It felt really strong," he said, "I drove as strong as I could." Speaking of the morning tragedy that claimed the life of motorcycle rider Bobby Goodin – Tracy has won the race six times on a motorcycle – he said, "You're starting the race knowing, and of course it gets in your head. You've got nice kids, a good looking wife, a cute dog – I want to make sure I make it down the mountain. But I never want to leave a race feeling I didn't give 110 percent."

"Monster" Tajima took third place, but a transponder issue kept him from receiving an official posted time. We only found out he was given a time of 9:46 at the awards ceremony, good enough for the last step on the podium. 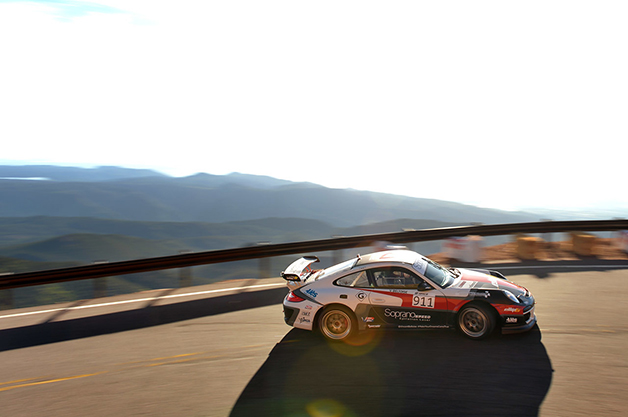 Frenchman Vincent Beltoise, driving a Porsche 911 GT3 RS as part of the Romain Dumas Rallye Team, won the Time Attack 1 class after heartbreak for Jeff Zwart. Zwart had topped the class in all the practice sessions, Beltoise always lurking several seconds behind – six seconds was the qualifying gap between them. Come race day, halfway up the mountain Zwart's Porsche developed a misfire; he said it was the first mechanical issue he'd had all week. He finished in 10:01.917, Beltoise getting a trouble-free run up the course to beat him by 1.173 seconds. 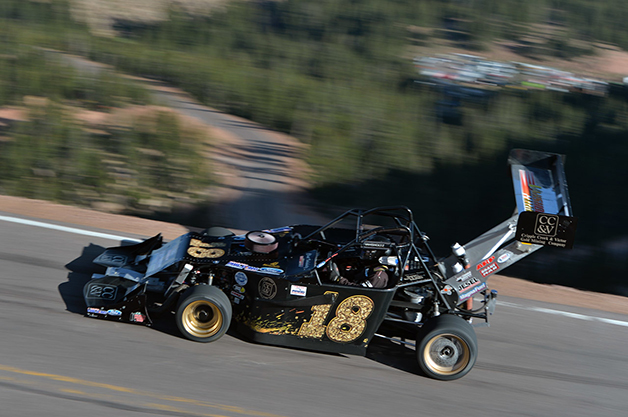 The mechanical bug bit the man expected to clinch the Open Wheel class, too. Paul Dallenbach, who'd broken the qualifying record on the lower slopes by five seconds, was out to break the 20-year-old class record. Instead, his Dallenbach PV03 broke down just after two thirds of the way up, around Glen Cove.

Clint Vahsholtz took advantage, the Woodland Park, CO native getting his second win in a row in the class and beating his winning time from last year by 1:13, as well as getting fourth overall in a homebrew racer he could have borrowed from Snidely Whiplash. Andy Figueroa followed him - his second-place time of 10:15 this year would have been enough to win by more than 50 seconds last year. Donner Billingsley, second last year, improved on his 2013 time by 1:20, still only good enough for third.

The top-three results for all other classes are below. An asterisk (*) indicates a record for the class. And a note on Guy Martin's time: a fuel-flow issue limited his bike to 5,000 rpm and he still finished first in class.