What is it about Jackson Center that has kept Airstream here for more than 60 years?

There is no hotel in Jackson Center, OH. Leave your smartphone on for too long, and the battery will die searching for a cell signal. And if you're driving through on State Route 274, make sure to drop your speed from 55 to 35 – there are children at play.

The two-square-mile town may look and feel like any other small town in America. But located right on Jackson Center's main drag is the home of one of America's most iconic brands: Airstream.

Airstream and its silver bullet-shaped trailers came to Jackson Center in 1952 from Los Angeles where they had been made since the late 1920s. Airstream founder Wally Byam showed up in town eager to find a Midwest manufacturing location for his business, which was booming as the country started learning to relax after World War II and the Great Depression.

Byam set up shop in an old factory that just ten years earlier had been making bazookas for American troops fighting in the war. The shop is still in use, mainly used for molding aluminum end caps for the Airstream trailers. But the company has spread across Jackson Center and employs around 400 people today.

What drew Byam to Ohio was simple – land was cheap and the workforce was eager. But that was then, and this is now.

Most of Airstream's competitors are in Elkhart, IN about 175 miles away. If the company had decided to move and grow where there industry had taken roots, they'd have much easier access to parts and ready-trained labor. But Airstream is still in Ohio, and it's thriving. So what is it about Jackson Center that has kept Airstream here for more than 60 years?

Looking at Airstream's main production floor from above is like looking down at a hive. A woodshop studio that builds furniture for the trailers sits in the middle, while all the metal work is done around the perimeter of the building.

Hundreds of workers move seamlessly, as if in a dance, to assemble their specific part of the trailer. Thousands of parts must come together to make an average of 45 of the company's signature silver trailers a week.


"It's hard to imagine finding a workforce who can build an Airstream to the quality we'd expect."

The view is a favorite of Airstream's president and CEO Bob Wheeler. His office is on the mezzanine looking down where he can see everyday what makes Ohio and Jackson Center important to his company.

"Trying to move it somewhere else, it's hard to imagine finding a workforce who can build an Airstream to the quality we'd expect," he says. "We've got a great set of blueprints, but it takes hundreds of hours of experience to stretch and cut the aluminum, drill and place a solid rivet – it's an absolute art form. You can't put those in a blueprint, you can barely teach it."

Wheeler joined the company in 2002 as vice president of product development and engineering. Three years later, when his predecessor and mentor Dicky Riegel left the company, Wheeler took over – just as the country was moving into another recession.

While Wheeler can never imagine moving Airstream anywhere else, he is, after all, a businessman. So staying in Ohio – and weathering a recession – has meant learning how to maximize efficiencies, cut costs when possible and minimize waste. It's here that the home field advantage comes into play. 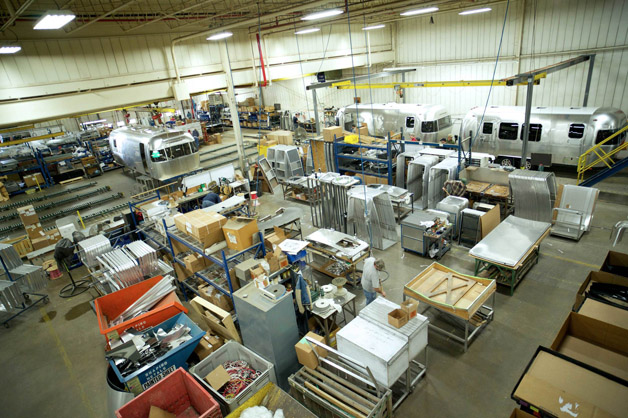 As the Great Recession deepened, Wheeler and his executive team started a "lean" manufacturing system, much like the ones automakers such as Toyota have used for decades. It's all about working smarter, not harder, Wheeler says.

Lean at Airstream means giving people who do the jobs the power to fix things that have been broken for years. "It forces management to do the things that the people in production knew needed to be done for a long time ago," Wheeler says. "Lean reassures folks in production that their complaints will be heard and addressed. It took awhile for people to believe it was true."


It's all about working smarter, not harder.

By tapping into Airstream's greatest asset – its employees – the program has been a huge success. The amount of time-wasting workaround is down significantly, as are workplace injuries.

But Wheeler's lean push has had the biggest win in focusing on trash. Over the decades, no one had given much thought to how much money Airstream spent every month on waste removal. It came to thousands of dollars a month, money that could be spent on wages not waste. Today, instead of paying someone to haul away their dumpsters, Airstream has partnered with a company that picks out what is recyclable, and it hauls it away for free. The symbiotic relationship allows Airstream to save money, and the local recycling firm make money by selling the company's scraps.

This is just the start of Wheeler's impact on the company, but he tends to let his workers take the credit – and a little luck. "I characterize my career as 50 percent hard work and 50 percent good luck," he says. "I take a lot of pride growing this business and stretching our boundaries. There's no place I'd rather be than Airstream." 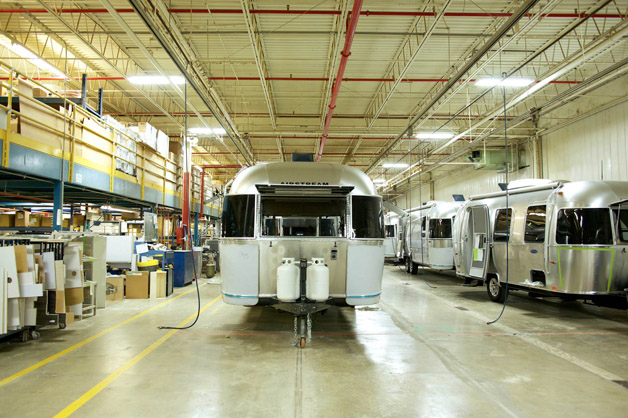 Airstream's anniversary hall of fame spans an entire wall outside one of the company's break rooms. Row upon row of employee pictures are grouped by how many years the people have been with the company. The range spans from five years all the way through 50 years.


Employment longevity is a point of pride at the company.

Employment longevity is a point of pride at the company – but it hasn't always been easy to maintain.

During the recession, Airstream's business dropped by a staggering 60 percent. Wheeler was forced to lay off half of his employees. But he made them a promise. When the company came back, he'd hire them again.

"We stuck to our core beliefs on the way down," Wheeler remembers. "We had to lay people off, we didn't have a choice, but we did it respectfully and carefully."

The people who were left got to work on making the business more efficient. If they weren't building an Airstream, they were thinking about how to build it better. 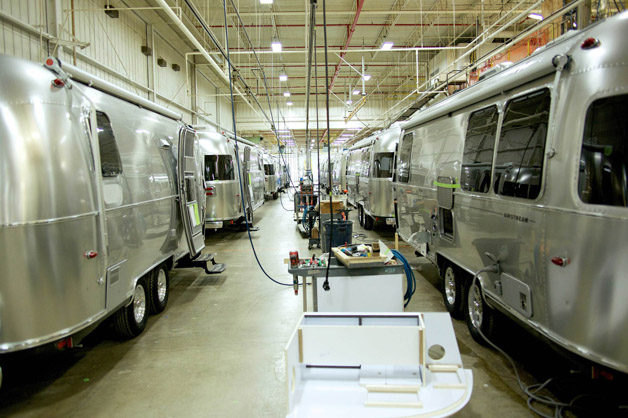 "We stuck to what we knew we needed to do, we put great manufacturing processes in place, knowing that when the business came back it would pay off in spades," Wheeler says. "I would preach that during the downtime, and it turned out to be true."

By 2010, Wheeler made good on his promise: he re-hired every single employee who wanted to come back.


"Airstream's been here since 1952 and I can't imagine it going anywhere."

That kind of corporate responsibility means everything to Amy Book, who works in the billings department. In the 12 years that Book has been at Airstream, she says her ex-husband has been laid off from several manufacturing jobs because the companies have moved production overseas.

"But I know stability is here in Jackson Center," she says. "Airstream's been here since 1952 and I can't imagine it going anywhere."

Most employees describe Airstream as something of a family, or at the very least a company that treats them like family. Company picnics are the norm, employment anniversaries are recognized with watches and grandfather clocks. And yes, each employee gets a turkey on Thanksgiving and a ham on Christmas.

"It is an old-school thing," Wheeler says. "But we're an old school company in a lot of ways."

Chapter 3: Getting A PhD In RV

The first Airstream models Byam built were made out of Masonite, a type of hardboard made of pressed-wood fibers. But for 78 years, the trailers have been made of shiny malleable aluminum. They are built with the same precision and attention to detail as an airplane's body.


Each Airstream takes on average 750 square feet of aluminum cut into hundreds of pieces to construct.

Each Airstream takes on average 750 square feet of aluminum cut into hundreds of pieces to construct. Workers team up to rivet pieces of the metal shell together, making sure to carefully place each rivet as to not dent or compromise the aluminum.

That teamwork is the cornerstone of Airstream's training program. Employees rely on a specific team for training and mentorship when they are first hired on. But it's common, even applauded, for Airstream employees to jump from department to department during their career, acquiring knowledge and sharing their own along the way.

For Larry Metz and Bob Sanford, that knowledge computes into what might as well be PhDs in RV. Neither have a college degree, as they both started at Airstream right out of high school. Aside from a milk route and working on the family farm, Airstream is the only full-time job that Metz has ever held. His photo on the anniversary board is in the 50-year group. Sanford has been with the company since 1967. 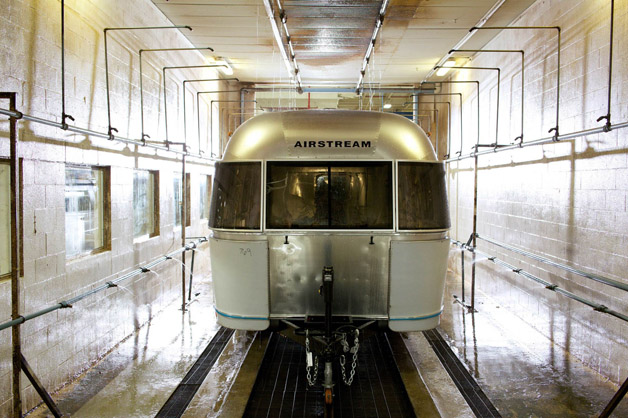 One of the best jobs Sanford has had at Airstream is helping to build a special Airstream trailer to house the astronauts from the Apollo 11 moon landing. Because NASA feared what the astronauts might bring back from space, they needed an airtight land capsule that could stop hypothetical alien pathogens from escaping into the earth's atmosphere.


"I realized what I had at Airstream and what a sacrifice it may be to go somewhere else."

"It was a very restricted build process," Sanford remembers. "My part was to build to end shells and part of the body assembly. It was quite an accomplishment because it was something nobody knew about. You knew there was an event happening that wasn't going to happen for another couple years, so you were kind of anxious but also had a lot of pride about it as well."

With all those years on the job at Airstream, Sanford and Metz could have taken jobs elsewhere. In 1985, Honda opened a plant in Anna, OH, just 20 minutes away. It was a big deal that a Japanese company had picked a little town in Ohio to build its cars. And Sanford says he'd be lying if he didn't think about leaving – but not for long.

"But then I realized what I had at Airstream and what a sacrifice it may be to go somewhere else," he says. So he stayed and has thrived in the company's research and development division, becoming the go-to guy to fix and tweak machinery at the plant.

"The people you work with here are big incentive to say," he says with a smile. "Besides, were else can you go and work on cool projects like with NASA?!"