Commenting on the rush of events that rocked beginning and end of the 24 Hours of Le Mans, Paul Truswell of Radio Le Mans said "the race is about the ability to endure, not just the ability of drivers to do what they do for a long time." The entire race machine, all the way down to the pit boards and radios, has to survive the stress and abuse of the entire day. This was the race to prove those words.

There were two Toyotas, two Porsches and three Audis, five of the seven led the race at some point, six of the seven ran in the top three. Toyota will be hugely disappointed that it didn't win when its car and drivers were so, so strong, but they gave Audi the kind of scare we haven't seen since the best of Peugeot's days, and Toyota did a better job of it even in the loss. Porsche blew away everyone's expectations, falling 3.5 hours short of a fairy tale ending that would have made Disney cry.

But Le Mans doesn't really do fairy tales. Well, not that fairy tale. Audi's Twitter handle during the event was #welcomechallenges. As usual, Le Mans answered for the entire field.
AUDI'S LUCKY NUMBER 13 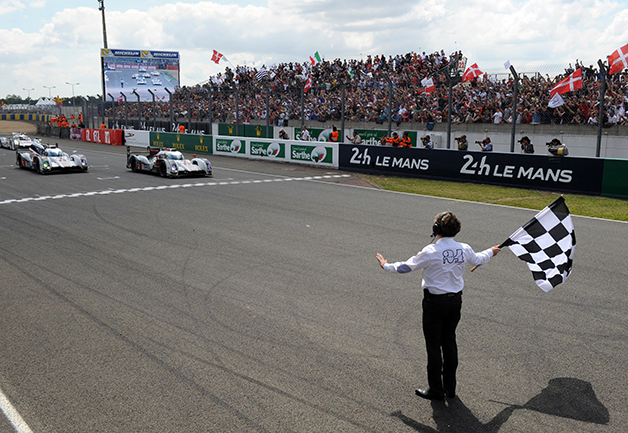 In twelve years of winning the battle in the French countryside, three of those against opponents with superior firepower, Audi's 13th victory proved the hard way that not only does it know how to win, but as we said in our pre-race notes, it knows how to play underdog.

The #7 Toyota driven by Kazuki Nakajima, Alexander Wurz and Stéphane Sarrazin stayed out in front for 14 hours, its biggest battle at first just getting through the storms that plagued the race about 90 minutes in. It didn't just rain, the skies acted like they were preparing for the sequel to Noah. The deluge undid the #8 Toyota when it and a Ferrari GT car got out of shape on the Mulsanne Straight and clobbered the #3 Audi driven by Marco Bonanomi. The second Toyota spent 45 minutes in the pits but didn't lose that much distance because the Safety Car stayed out for 45 minutes while a gutted Bonanomi had to watch his Audi get hauled off the track. Wurz would later call his opening drive "character building." 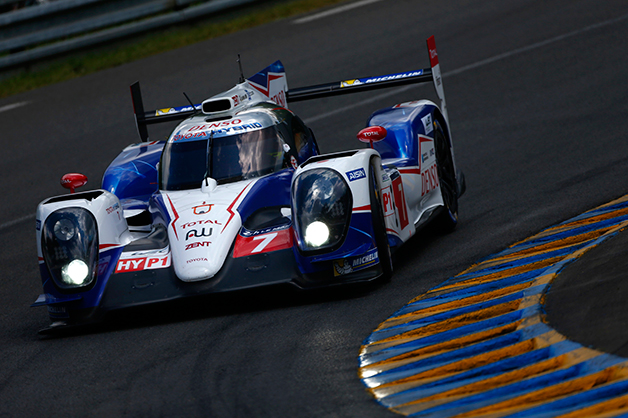 The Four Rings stayed in contention with Toyota through a combination of entering three cars in the race, running longer on each set of tires and little things like having working radios. When the race-leading #7 Toyota caught the electrical fire that would end its run at around 5:00 AM, an Audi driver radioed in to let Audi know about it, but Toyota couldn't reach Nakajima because his radio didn't work – we heard they were trying to call him on his cellphone to tell him to bring the car in. That didn't work either, and his race was done when the car quit at Arnage.

Audi also knows when to be fast. After losing seconds per lap to the Toyota at the beginning of the race – six hours into the race the lead Toyota could pit and emerge still in the lead – come Sunday afternoon the Audis were the fastest cars on track. Even after late turbocharger troubles that required turbo replacements on both the #1 and #2 Audis, Vorsprung durch Tecnik took it again, the #2 Audi driven by Benoit Tréluyer, Marcel Fässler and André Lotterer crossing the line ahead of the #1 Audi driven by Tom Kristensen, Lucas di Grassi and Marc Gene. The #8 Toyota of Anthony Davidson, Nicolas LaPierre and Sébastien Buemi took third, five laps down, a healthy achievement considering how it looked after it crashed in the early rains. 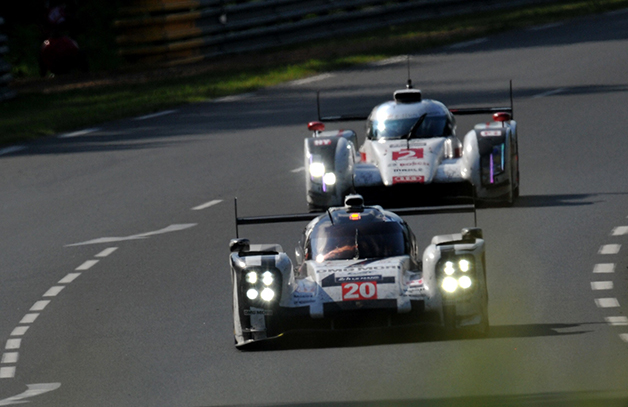 Porsche had been gunning for pole, the legendary Le Mans entrant wanting to make its news early since it wasn't expected to get its two cars to the end of the race. The race team in Weissach didn't line up first, but they made much bigger news after Fernando Alonso waved the green flag: the #20 car driven by Timo Bernhard, Mark Webber and Brendon Hartley took the race lead for several stints, and after both Audis took to the pits to deal with their turbos the #20 Porsche took the lead and looked like it could win the race with less than four hours to go.

Mechanical gremlins would make sure that didn't happen, though, the #14 Porsche teething on issues like its pit lane speed limiter switching on while racing out on track, the #20 knocked out by brake issues that had seen it running straight on at the end of Arnage several times through the race. The team got the #14 car back onto the track for the last lap of the race, just to cross the line, but wasn't classified as a finisher. No matter – its showing will not be forgotten, and now we all know that Porsche is going to be dangerous, and soon. 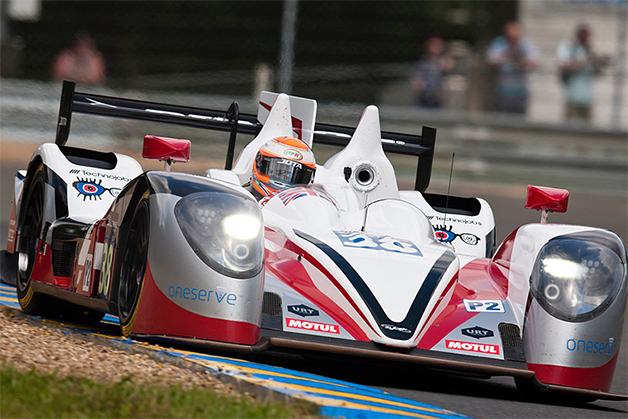 JOTA Sport, the team that Audi plucked Marc Gene from to replace Loïc Duval and that Gene called "a junior team" for Audi, won LMP2 with its #38 car driven by Simon Dolan, Harry Tincknell and Oliver Turvey. As in the top class the team had to overcome mechanical issues to fight for the win, taking the lead just before the final round of pit stops. They came on form late in the race, though, the early hours dominated by Alexander Imperatore in the #47 KCMG Oreca Nissan and the #34 Race Performance Oreca Nissan, the late night hours ruled by the #35 G-Drive Nissan.

Special mention goes to Jann Mardenborough, Alex Brundle and Mark Shultzhitskiy in the #35 G-Drive by Oak Racing Nissan. Driven by 2011 Nissan GT Academy protégé Mardenborough through the night, the kid distanced the LMP2 field but the car was ultimately undone by a brake disc failure, then engine troubles, then a puncture late in the race. It would finish fifth. 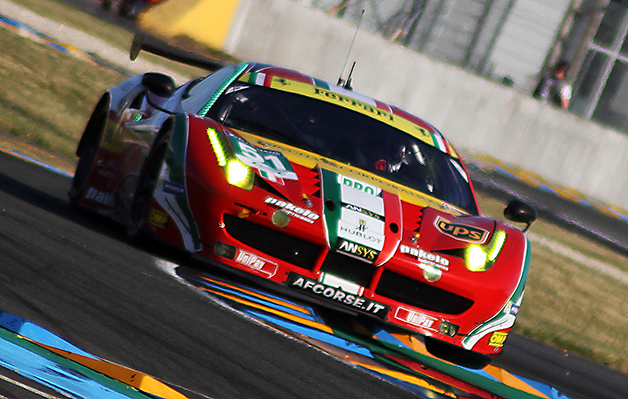 The pole-sitting #51 AF Corse Ferrari driven by Gianmaria Bruni, Tony Vilander and Giancarlo Fisichella won the GTE-Pro class, but the new Corvette C7.R racecars thoroughly made up for last year's ugly outing by fighting for the lead for much of the race with both the #73 and #74 cars, the #73 driven by Jan Magnussen, Antonio Garcia and Jordan Taylor coming in second. The #74 had been the early challenger for the lead, going into first place on Lap 10, but a change of brakes, a repair to fix its illuminated sign and overnight alternator problems ended its charge.

It was the Aston Martins that has looked strongest during the overnight stretch, however, the #97 Aston Martin driven by Darren Turner, Stefan Mucke and Bruno Senna passing and repassing for the lead during some excellent intervals of nose-to-tail racing between the top three that went on for hours. A power steering hose ended the challenge, the #97 finishing 27 laps down. 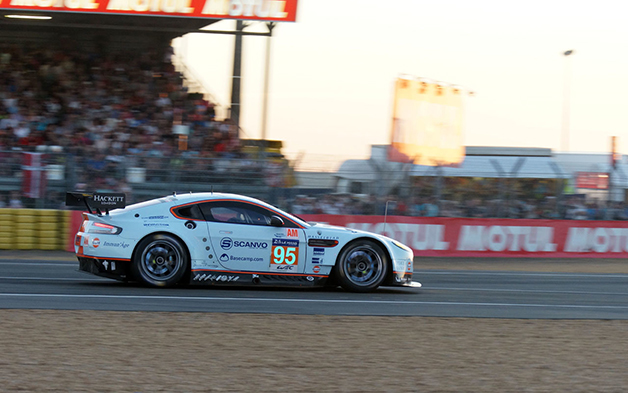 Italy got the best of England at the World Cup and GTE-Pro, but Aston Martin triumphed over Ferrari in GTE-Am. The #95 V8 Vantage driven by Kristian Poulson, David Heinemeier Hansson and Nicki Thiim lead the way in a show of domination from the #88 Porsche of Christian Ried, Klaus Bachler and Khalid Al Qubaisi, and the #61 AF Corse Ferrari of Luis Perez Companc, Marco Cioci and Mirko Venturi.

The British marque might have taken the top two spots if not for a power steering problem in the second #98 car. But "If" being the most important word one can use at Le Mans, we could say that the #77 Dempsey Racing – Proton Competition Porsche, the half-sister car to the #88 Porsche – would have had a beautiful showing if not for issues like getting a three-minute stop-and-go penalty for spinning its tires in the pit lane.

THE FUTURE IS COMING... SOON 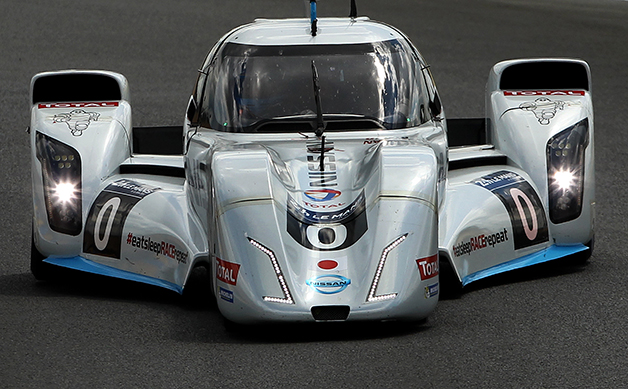 The Nissan Zeod RC stopped on Lap 7, done for the race, its gearbox failed. Obviously the team wanted to do a lot more, but achieving a full-electric 300 kilometers per hour (186 miles per hour) down the Mulsanne Straight isn't bad work for a weekend.

That was your 2014 24 Hours of Le Mans. Assuming Nissan gets its homework done just right and comes with a strong challenger, next year's battle at the front should be nothing short of amazing.