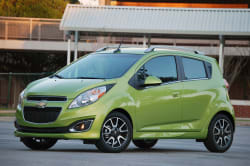 Years ago, the subcompact car market was mostly made up of under-powered, poorly featured little penalty boxes, but over the course of the past decade, this segment has absolutely flourished. Cars like the Honda Fit are something most people would happily drive. And it appears that Chevrolet is really figuring things out with booming popularity from its one-two punch of small models with the Spark and Sonic.

A new analysis from Automotive News finds that Chevy is outselling Toyota, Honda, Ford and Hyundai in the segment and sales are up year-over-year, so far. The Spark is growing 28 percent over last year to 18,591 vehicles from January through May, and the Sonic is up 8 percent to 40,672 cars sold in that time. Last year, the Spark also beat forecasts for its first 12 months on sale after introduction by 35 percent.

Why? First, people actually want them. Both cars are available with high tech features like Chevy's MyLink infotainment system with Siri. Second, they fill two gaps in the subcompact market. The Spark is a tiny urban commuter for people who only want basic transportation. That allows the slightly larger and more powerful Sonic to be a bit sportier and more luxurious, especially with its RS and Dusk models. According to AN, the differentiation means discounts are less necessary on the Sonic because a cheaper alternative is already in the showroom for buyers.

The Bowtie appears eager to capitalize on this tiny vehicle success, too. The Chevy Trax, riding on the same platform and with the Sonic's 1.4-liter turbocharged four-cylinder engine, is coming to the US market in the near future to offer a third model in the class. The next-generation Spark was also already spotted testing with a redesigned face in Europe, for a rumored 2015 debut. The same scuttlebutt pegged the next Sonic for a likely 2016 introduction. The company definitely appears poised to grow in the diminutive segment.