The Red Icing And Candles On This Year's Hybrid Hypercar Cake

What a year it's been for enthusiasts who love high-performance, higher-dollar automobiles. The past twelve months or so have been consumed with the three horsemonsters of today's hybrid hypercar enlightenment: the Porsche 918 Spyder, the McLaren P1 and the Ferrari LaFerrari. Getting into just two of the three would be better than a lump of coal in one's stocking come holiday time, but for me, it'd still leave things feeling sadly incomplete, gnawing from within 'til the end of days.

Getting the call from Maranello, therefore, was even more fortunate and satisfying. The 918 Spyder – the only seriously green hybrid of the trio – shook me up with its sophisticated menu of technologies. The McLaren P1 remains more of a true hypercar than the Porsche, what with its e-motor designed to boost the lightweight beast to supernatural speeds above any terrestrial concerns like fuel efficiency. And now it's time for the Italian with the funny name, LaFerrari. No mistake about it: I've been waiting all year for this car a little more than I've been waiting for the other two.

This run of hypercars built up over the year like a famous three-part opera: The enthralling start of the drama sitting in the Porsche 918, tear-assing the heavier green dart around a track in Spain; then on to the UK with the lightness and quick heart of the biturbo V8 in McLaren's track-inspired P1, and it was all to be topped-off at Fiorano with the LaFerrari, fit for a Wagnerian finish.

Now having had seat time in all three cars, it's my contention that the 918 Spyder, sensational as it is, feels like a stand-alone proposition in its own right. The full-on hardcore hyperdrive combat will be between the 903-horsepower P1 and the 950-bhp LaFerrari. It's going to be interesting as hell, too. Maybe throw in a Pagani Huayra and a Koenigsegg Agera just for kicks. 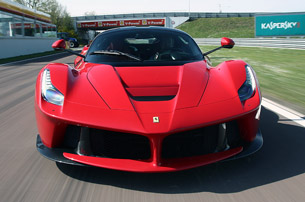 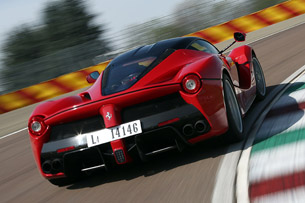 By selecting the name LaFerrari, the company is telling us which model is the best or the most 'real.'

The name "LaFerrari" has seemed silly to me since the car's unveiling in early 2013. Yet it took just one answer from Ferrari head of road vehicle development, Franco Cimatti, to have it all make sense and even not sound so weird anymore. "The name is a reflection," says Cimatti, "of all of the very best capabilities and most advanced technologies within Ferrari coming together to create a single model." So, by selecting the name LaFerrari, the company is telling all of us which model is the best or the most 'real.' Point taken.

It's still a little silly, though.

On a day blessed with perfect sun and temperatures, my first driving opportunity was off piste, up into the Apennine foothills south of company headquarters in a red LaFerrari. All of its onboard tech would mean nothing whatsoever without a good set of treads and a great chassis setup with commensurately powerful and telepathic steering and braking. To this end, Pirelli has formulated a winning set of P Zero Corsa tires – 265/30 ZR19 (93Y) front, 345/30 ZR20 (106Y) rear – to go with the Ferrari's lower-slung sprung mass. The point lowest to the ground on the LaFerrari is 1.2 inches lower than the same point on the Enzo. Its physical center of gravity is a good 1.4 inches lower than the Enzo. Width is diminished by 1.6 inches, but the driver hip point is down a full 2.4 inches, too, so the greenhouse does not feel pinched. 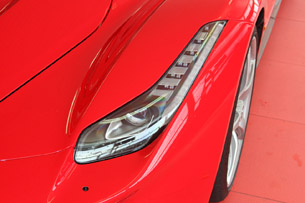 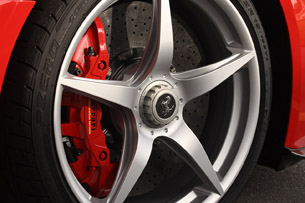 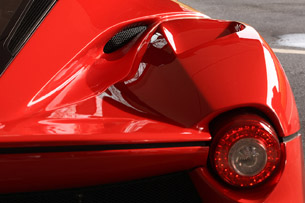 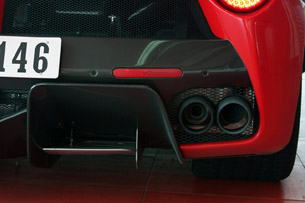 The interior was designed to accommodate the wearing of helmets.

Again, while the stunning exterior shape of the glassy greenhouse is narrower than that of the Enzo, the interior has all the space a driver up to six-foot, four-inches could ever need. The two carbon composite swan doors are light, too, and hinged in the proper place for simple entry and exit. Between the doors' size and their integration of the rather wide rocker panels, LaFerrari is among the easiest of hypercars ever to live with, even for larger rich people.

Open one of those doors, and the cabin itself is not quite Spartan, but it is at least Etruscan in its simplicity. Everything looks efficient and wisely chosen for the dash and center console, but the climate control knobs at dead center appear to be swiped from the late 1990s. All the rest of the controls are as they should be. That's a 12.3-inch dash screen, by the way, and it is perfectly suited to holding the amount of information required for a serious track car. Everything is very intuitively arranged thereon as well, so there's little fumbling around with the eyes to see what you need to see. 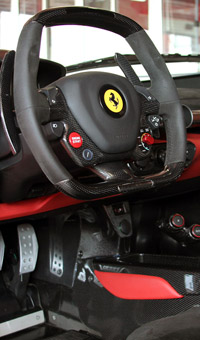 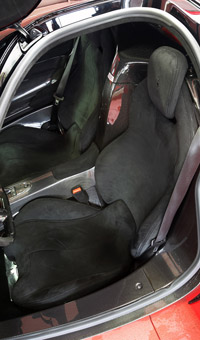 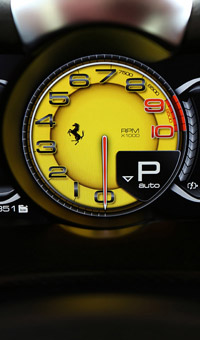 Upshifts and downshifts are simply as quick as your thoughts.

Say what you like about the drivability of this car on the far-less-than-idyllic surfaces all around Maranello, Modena, and Bologna, but both this new hypercar and the old Enzo are simply not meant for ordinary public roads. The positive road-going remarks I have about LaFerrari's third-generation magnetorheological dampers are more like a pleasant surprise, because the 499 lucky owners of this model will be doing the 950-horsepower plug-in-able hybrid flyer few favors if they don't exercise it regularly at their local closed circuit. The interior was designed to accommodate the wearing of helmets, too, it must be pointed out.

There was much zipping around over the hilly, rough two-lanes with the manettino on the squared-off CFRP ( carbon fiber reinforced plastic) steering wheel set variously to Sport, Race and ESC OFF modes. First, you notice the newly programmed, seven-speed, Getrag dual-clutch gearbox snapping your sense of awareness into the absolute present. With much of the LaFerrari's development done under the watchful eyes of Ferrari's F1 engineers, they know how to take this essentially ten-year old Getrag DCT gearbox and make it young again. From the manettino's Race setting on up, the upshifts and downshifts are simply as quick as your thoughts. The rev-matching is maniacally quick, too, so the sound out the back of the car is that of an F1 gear song of ten year's ago, according to Ferrari team boffins.

Then come the huge carbon ceramic Brembo brakes – 15.7-inch discs with six-piston calipers up front, 15.0-inch rotors with four-piston pincers in back – that allow you to brake as late as you dare with their addictive first bite. These are the same discs found on the 458 Speciale.

Only with ESC off can the LaFerrari execute its effortless oversteer with smoking Italian rubber. The steering is a mere two turns lock-to-lock, and this, combined with the company's latest electronic differential, makes reeling in the oversteer at 9,000 rpm incredibly easy. Though the LaFerrari can be made to dance prettily in such places, I'd really rather have either the more compact 458 Spider or a Porsche Cayman GTS if that were my goal, even if only to avoid the $200,000 repair bills should things go dramatically wrong.

This 789-brake horsepower, 6.3-liter dry-sump naturally aspirated V12 – dubbed F140 FE – is the same powerplant found in the 730-bhp F12 Berlinetta, the latter weighing 231 more pounds with the engine mounted instead at the driver's feet. The LaFerrari then tacks on 161 more horses and 199 more pound-feet of torque. This HY-KERS powertrain gets its added fuel efficiency is from the reining in of the V12 at lower revs, while the 160-hp e-motor being used to pop the LaFerrari to 60 miles per hour in just 2.5 seconds or less. Top speed is 221 mph – far loftier than the original 205 mph figure that was quoted at launch – and I managed 174 mph by the braking point at the end of the longest straight. An even lengthier straight such as at the Nürburgring Nordschleife or La Sarthe would tell even more. 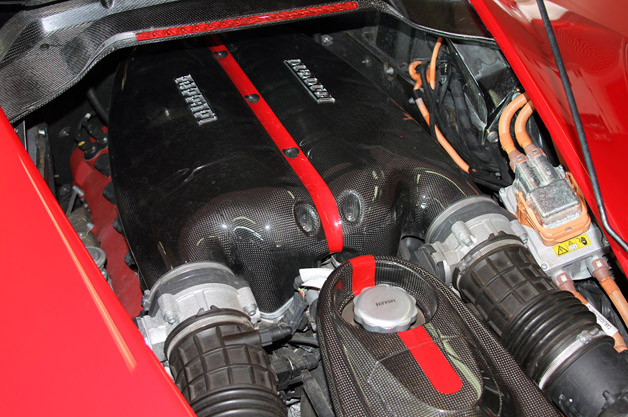 Given that the HY-KERS setup squelches the V12's natural instinct to scream from 1,500 rpm, the overall sound of the LaFerrari in hotter throttle moments at lower revs can feel a little strange, especially since you can feel the electrically aided speed and thrust. Where the four tailpipes really find their song is from 4,000 rpm on up to the 9,250-rpm red zone, and between 4,000 and 7,000 revs, LaFerrari is a veritable animal.

Stability is remarkable on this first halo Ferrari equipped with dramatic active aerodynamics. This development was foreshadowed on the 458 Speciale with its moving front and rear touches, but on LaFerrari, it's pretty wild, more wholly integrated and entirely more effective. LaFerrari boasts the most stunningly adaptive active system I know of, especially with the rear wing working together with two flaps in the lower rear fascia. The rear bits are in constant movement up and down, creating a dramatic air-brake effect on full lift-off or braking at high entry speeds. There's a very helpful 800 pounds of downforce with all aero fully employed at 125 mph, and at this light weight (under 2,800 lbs dry), the downforce together with the ceramic discs make managing the abruptness and the ultimate effectiveness of the brake pedal quite the learning curve. Under braking, and even when the V12 is just generating more torque than is required, that extra power is stored in a battery pack for future use by the drive motor. 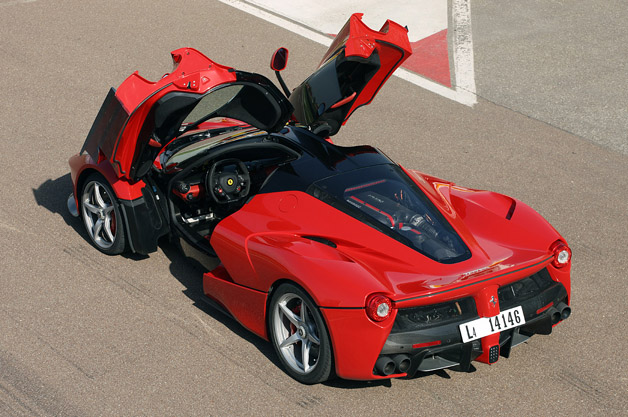 LaFerrari ownership requires that the buyer be a serious collector who has purchased at least five new models from the company in the past few years.

The grippiness of the competition-style, tight-ratio steering wheel and the constant body hug from the custom seats means the driver feels more attached than ever to what's happening to the machine wrapped around them. The seats come in three sizes and are attached in a fixed position on the floor, and the lower back and lateral support are the finest you're likely to encounter. With a lever at the front right of the seat squab, the pedals are released toward the driver, enabling you to find the proper distance positioning with your legs. It's not new tech, but it just works perfectly, and it keeps the driver's mass centered in the carbon-fiber chassis.

Ultimately, the LaFerrari is a much easier-to-drive hypercar than the Enzo. Around its 1.9-mile Fiorano home track, it is a full six seconds quicker than the Enzo ever was in its standard trim. That may or may not have something to do with the fact that, not only were all 499 examples sold out by the time it was actually shown to the public at last year's Geneva Motor Show, there were fully 700 intent buyers in line. That's pretty amazing when you realize that a requirement of LaFerrari ownership is that the buyer be a serious collector who has purchased at least five new models from the company in the past few years.

The rich just get richer, the lucky just keep getting luckier and the hypercar scene keeps getting more magnificently frenetic. What a wonderful world.