Race Recap: 2014 Canadian Grand Prix makes its money on the back end Momentum. That was the word of the weekend at the last race in Monaco – Nico Rosberg retaking it, Williams getting reacquainted with it and Marussia tasting it for the first time, among other examples. That same, weighted term flew to Canada with the money circus known as Formula One, took all weekend to build and then walloped the front end of the field and the season on Sunday afternoon.

Rosberg carried his Monaco triumph into qualifying, putting his Mercedes AMG Petronas on pole ahead of teammate and reconciled friend Lewis Hamilton. Reigning World Champion Sebastian Vettel finally got the better of Daniel Ricciardo, lining up for Infiniti Red Bull Racing in third ahead of his teammate in sixth, split up by Valtteri Bottas and Felipe Massa in the Williams. Ferrari, having brought numerous aero updates for this race, didn't get the push it was really looking for, Fernando Alonso happy to get seventh ahead of Kimi Räikkönen, still troubled by his F14T, in tenth. Jean-Eric Vergne secured eighth for Toro Rosso, Jenson Button lining up ninth for a still-struggling McLaren.

When the lights went out, Mercedes, Williams and Marussia would all find out how quickly momentum can short circuit or disappear in a sparkly ball of high-speed contact, spilled fluids and tire barriers. 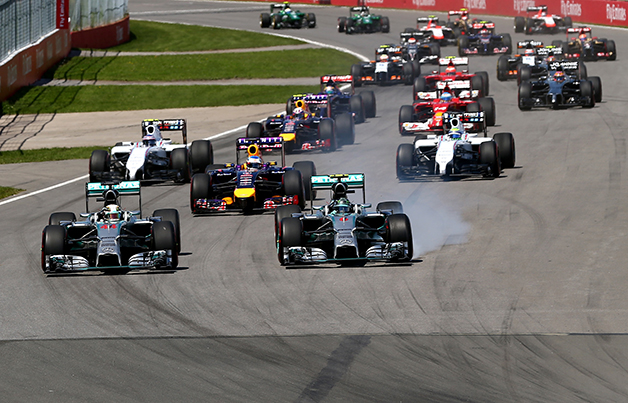 When the lights went green, Hamilton got a brilliant start, pulling alongside Rosberg into Turn 1, but Rosberg still had the line. The German held the inside and used the whole track for the exit, sending Hamilton into the runoff area, which allowed Vettel to steal second place ahead of the Brit.

The racing only last four corners, though, because Max Chilton lost his Marussia going through the right-handed Turn 4, his back end swinging across the track and clouting the car of teammate and Monaco hero Jules Bianchi as they headed into the dogleg left of Turn 5. Bianchi ended up in the wall with a car broken beyond the apparent speed they were carrying through two hard turns. Chilton had to retire as well for the first time in his 26-race career. 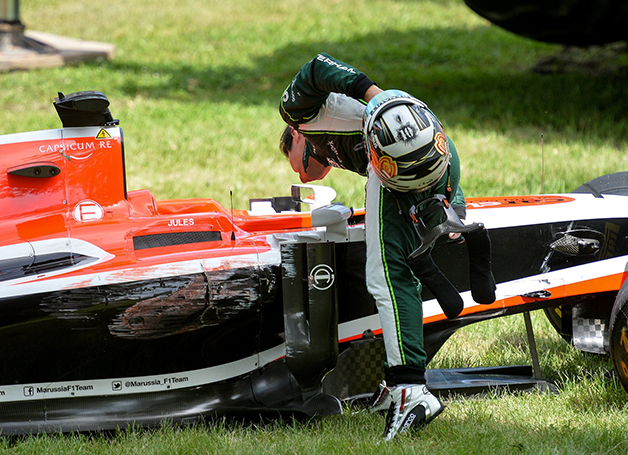 The crash location and oil on the track brought out the safety car for seven laps. When it returned to the pits and racing resumed, the scene was familiar: the two Mercedes' in front, the rest fighting for third and beyond. That scrap got interesting when Force India driver Sergio Perez, who qualified 13th, stayed out on a one-stop strategy and ended up in third, followed by teammate Nico Hülkenberg who had qualified 11th. They led a train, keeping the quicker cars of Vettel, Bottas and Ricciardo falling further behind the Mercedes duo, while up front, Hamilton closed in on Rosberg.

Other than a few passes like Vettel and Bottas getting around Hülkenberg and Massa passing Alonso, the middle stint stayed pretty quiet until just before the second round of pit stops. On Lap 37, Hamilton radioed to say he had no power, and the pit wall confirmed that Rosberg had the same problem. The MGU-K unit, the regenerative braking system for the back brakes that helps slow the car and also provides an energy boost, had gone kaput on both Mercedes. That dropped their top speed down the back straight by 20 miles per hour. They'd built up a huge gap by this point, but the cars behind started reeling them in to the tune of up to three seconds per lap. When Rosberg ducked into the pits on Lap 44, Massa took the lead, putting a non-Mercedes car at the front of a race for the first time all season. 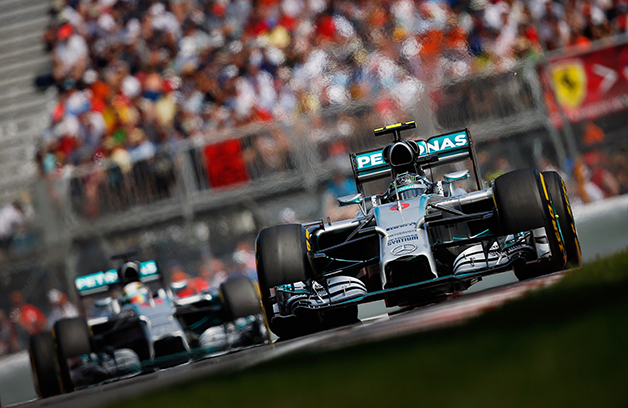 The two Mercs still scrapped it out, Hamilton shadowing Rosberg and trying to get around him at the hairpin on Lap 45, running wide and taking the escape road, then losing his rear brakes entirely and limping around the track back to the pits. The theory was that his brakes overheated because of all the extra work they had to do minus the MGU-K system, and being in hot air behind Rosberg for so long. It's Hamilton's second DNF of the season, after a six-cent washer took him out of the first race in Australia.

Rosberg took the lead again after Massa pitted on Lap 48, but only had a 3.8-second advantage and 22 laps to try and defend it with an ailing car. The order on Lap 52 was Rosberg, the one-stopping Perez, Ricciardo – who emerged from his pit stop just ahead of teammate Vettel, Hülkenberg, Bottas and Massa. 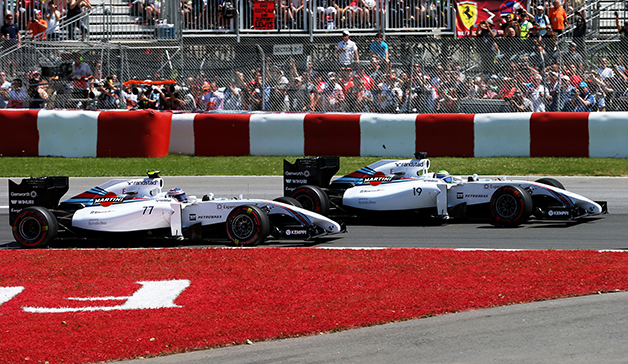 Williams went back to its team orders cookbook, but the right way this time, and told Bottas to move aside for the quicker Massa. The Brazilian shot past the Finn, then quickly scalped Hülkenberg, then chased down the lead four. He tailed Vettel for a number of laps but couldn't get past the German, for some reason letting his best chance go when he didn't open his DRS down the back straight on Lap 66 after Vettel had made a mistake through the hairpin.

Meanwhile, Perez began dropping back with brake problems of his own, letting Ricciardo get by, after which Ricciardo ate into Rosberg's lead by up to half a second per lap. With just two laps to go, Ricciardo snuck up to Rosberg through the final chicane, lined up him into Turn 1 and made the pass to take the lead. 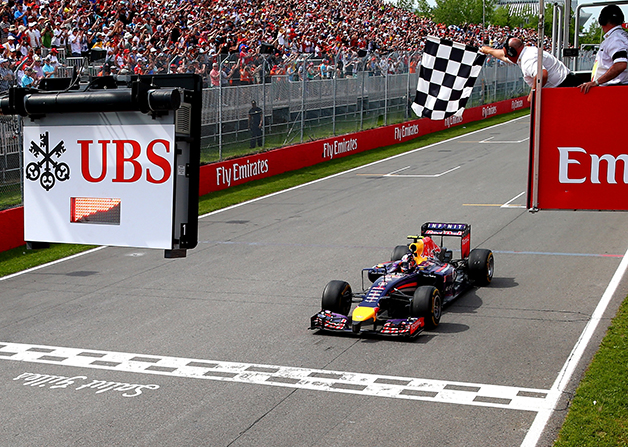 On Lap 69, Perez ran wide and that let Vettel get by, then Massa rocked up on Perez' gearbox down the front straight on the last lap of the race as the two headed for Turn 1 at almost 190 miles per hour. Massa slotted left to take the inside line, then Perez moved left as he hit the brakes and Massa plowed into him, sending both cars sliding around Vettel and hard into the tire barriers. It wasn't exactly clear what went down from the ground shots, but the helicopter footage shows Perez moving over in the braking zone. The stewards blamed him for the crash and assessed a five-spot grid penalty for the next race in Austria.

The full-course yellow gave Ricciardo a chance to savor his victory as he drove the final lap. The Aussie, who's been a sensation all year, took his first win ever, ahead of Rosberg, Vettel, Button, Hülkenberg, Alonso, Bottas, Vergne, McLaren's Kevin Magnussen, and Räikkönen.

Rosberg's 18-point haul for second place put him even further in front of Lewis Hamilton, 140 points to 118. Ricciardo's win gets him up to third place with 79 points, followed by Alonso with 69 and Vettel with 60. 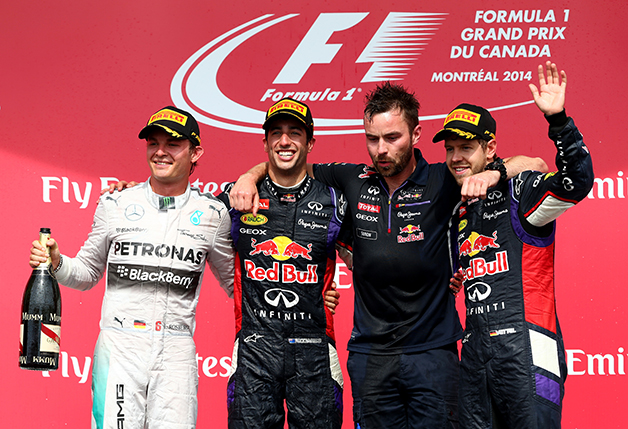 Mercedes' standings in the Constructor's Championship barely took a hit, the Silver Arrows on 238 points compared to Infiniti Red Bull Racing with 139. The next four teams, Ferrari, Force India, McLaren and Williams, however, are only 29 points apart. Force India and Williams are probably the two most disappointed about that chart right now: whether or not Massa had made the pass on Perez, as long as they both finished in either fourth or fifth, Force India would be ahead of Ferrari and Williams would be ahead of McLaren. Lacking the development budgets of the big boys, those smaller teams know they can't let any opportunity get away.

We'll find out what momentum has planned for its next act at the Red Bull Ring in Austria on June 22, where Rosberg and Hamilton will be racing for the win and Niki Lauda's honor.